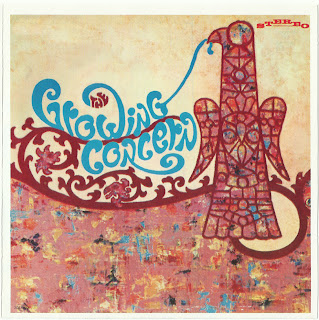 This self-titled album by The Growing Concern curiously first saw the light of day in 1969 on Bob Shad's Mainstream label (Mainstream S/6108), an imprint more familiar to jazz and blues fans than devotees of psych/pop. Perhaps Shad thought he was going to repeat his commercial triumph with The Growing Concern.

However, the band was a different proposition altogether with its emphasis on beautiful vocal harmonies and fantastic guitar and organ work rather than the Joplin-dominated R'n'B of Big Brother, and consequently Shad only allowed the group into the studio on a single occasion, dropping them from the label after this, their eponymous debut. The album, which is brilliantly recorded, is of a consistently high musical quality and the band surely deserved a better fate than the obscurity that Shad's indifference consigned them to." 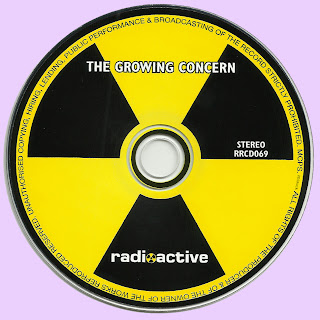 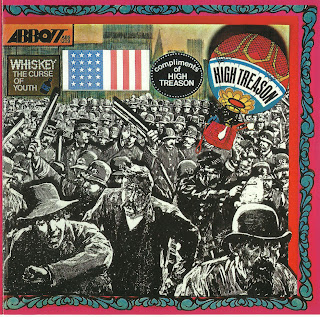 The seeds of High Treason started at Temple University in Philadelphia, circa 1967. Edgar Koshatka started jamming with an assortment of "alternative music types" that were fairly commonplace in those days of sit-ins, protests, and general mayhem. Edgar was a jazz guy-at heart and a by-then-halfhearted classical guy as a music major.

Edgar always kept half-an-ear cocked to some of the innovative new rock radio stations springing up, and was completely "blown-away" (hey, it was the sixties, right?) when the rich textures, modal harmony, and sonic power of the Jefferson Airplane, circa "After Bathing At Baxters". In mid-'68 or so,, Edgar met Marcie Rauer and Saul Goodman, and many musical ideas began to be exchanged.

The eclectic, multi-style musical mix that was to be the band's trademark began to emerge, based around the writing of Edgar and the instrumental and vocal contributions of all. Joe Cleary, a successful top-40 type who had seen "the light" came aboard, and various bass players and drummers came and went with regularity (a problem that was to plague the band; there are also more than one-of-each on the album). The instrumental and vocal nucleus of Edgar, Marcie, Saul, and Joe remained constant, however.

By late '68, the band had become a full-fledged effort, with a manager, a bunch of equipment, roadies, a band house, and lots of record company inquiries. Along with that came many gigs at scores of PA, NY, NJ, DE, and occasionally furtherafield concert halls, coffee houses, and especially at the symbolic late 60's venues that would later be dubbed "psychedelic garages". These, of course, were the arch typical social and music centers of the time for the alternative culture that had wafted from west coast to east.

The band finally signed a record deal in 1969 with, of all things, a label that was best known for recordings of children books (American Flag rolling papers on the front cover must have been an eyeopener for them!) The group spent a good part of 1969 in New York, recording the album, which was produced by Howard Massler, son of the record company founder and owner. By the early 70's, the band found itself with a record out, a hefty spate of gigs like the Electric Factory, Cafe Au Go Go, Electric Circus, and even The Filmore East (back of booklet).

However, simultaneously, some budding strife along with the realization that their record company didn't have much of a promotional clue in the rock-music-biz, began to take its toll. The band still couldn't lasso the perfect rhythm section (players who understood classical, bop, country, acid, modal/Trane, Miles, and whatever else might come along). Saul, the longtime guitar stalwart, along with Ron, the band's longestlived drummer, began drifting further and further into the Shri Chinmoy/Mahavishnu Orchestra cult, following them around more and more, not exactly a shot in the arm for the High Treason gig or rehearsal commitment.

Edgar went back to school to finish his last few hours for a music degree. Marcy went back to school too, and Joe, always the "straight guy", went back to work. And the infamous band-house fell victim of a sale to a well-known bug and pest eradication service for an office. The last High Treason incarnation, circa '71-73, featured NO guitar (how's that for a rock and roll statement), and just four members-Edgar, Marcy, bassist Terry Morrissey, and drummer Richard Ormsbee. Everybody thought that was the really accessible version of the group, with funky, melodic songs (again, mostly penned by Edgar) and a much less manicdepressive group fit.

They continued playing a lot of mostly local gigs, and rehearsed in a large center-city rehearsal hall. But, the halycon days were over, the rolling papers were all used up, and times were a " changin'" once again. The Nixon recession was in full bloom, and by 1973, record companies weren't in the mood to do much signing. A burglary of just about all the band's equipment in March of 1973 effectively ended High Treason for good.
by Edgar Koshatka Philadelphia, January, 2001 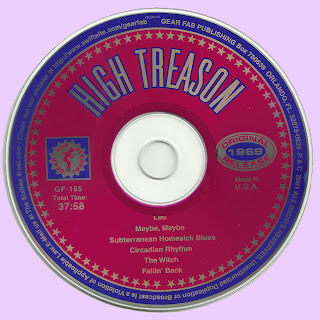 Just Paste
Posted by Marios at 5:59 AM 5 comments: