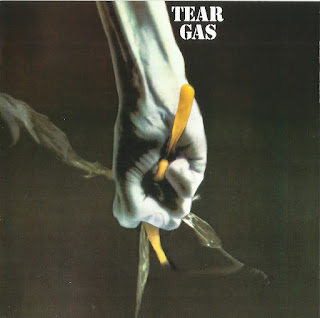 Tear Gas, the Scottish rock outfit, released a pair of albums in the early ’70s that vividly highlighted their talents for guitar-based rock. Though the band kept up a rigorous touring schedule, it only really paid off once a few band members joined with Alex Harvey as The Sensational Alex Harvey Band. Still, Esoteric’s reissues of Piggy Go Getter (in its first-ever official CD release) and its follow up Tear Gas show the band’s early promise.

The Glasgow-based group originally formed in the tail end of the ’60s and included Eddie Campbell on keys, Zal Cleminson on guitar, Chris Glen on bas and vocals, Gilson Lavis on drums, and Andi Mulvey on vocals. By 1970, their lineup had changed.

By 1971, Tear Gas had undergone another shift in personnel as Eddie Campbell departed and Ted McKenna replaced Wullie Monroe on drums. Session keyboardist Ronnie Leahy stepped in during the sessions of what would become the band’s self-titled second album. He was a skilled player and, as Zal Cleminson recalls in the liner notes, “[Leahy] could do exactly what we needed.” The band’s goal for their next album was to create a collection of more rock-leaning material. While the debut had some Traffic-like hippie-folk, Tear Gas was inspired by some of their contemporaries to embrace a heavier sound.

To that end, Tear Gas took a stab at that Jeff Beck Group arrangement of “Jailhouse Rock/All Shook Up” and covered Jethro Tull’s “Love Story.” The latter, with its slow build and sudden dynamic shifts, was often the dramatic opener for Tear Gas’s live shows. With more than one scorching guitar solo and several intense instrumental interludes, “Love Story” was a far cry from some of the lighter fare on their debut. The medley of “Jailhouse Rock” and “All Shook Up” was equally heavy, with layers upon layers of distorted guitars consistently propelling the tunes forward, if sometimes burying the vocals along the way.

Other highlights include the rockabilly-inspired “Lay It On Me.”  Its crunchy leads, honky tonk piano, and layered slide guitar lines demonstrate their country-rock flair, which they amp up as loud as possible.  The Sabbath-like “I’m Glad” begins as a more straight-ahead heavy rocker with an array of propulsive guitar riffs.  After a lengthy solo, the band glides gently into the second part of the song – a more tender, ballad-like B-section with electric twelve strings, phasey drums, and yearning (if not particularly strong) vocals.  The band builds just as quickly into another rocking exit.

Though sales figures for Tear Gas showed much room for improvement, the album’s release brought the group attention throughout Europe.  In early 1972, Tear Gas opened for Alex Harvey at London’s Marquee Club.  By the middle of the year, faced with the fact that they weren’t going to reach the levels of their heroes, Glen, McKenna, and Cleminson signed on to be Harvey’s back-up group, eventually becoming known as The Sensational Alex Harvey Band.  Donning larger-than-life glam outfits and performing experimental-leaning music, the SAHB, as it became known, found a cult following in Europe.
by Sam Stone, July 9, 2019 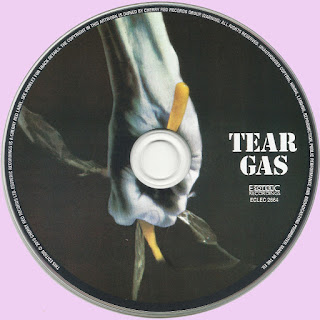 Free Text
Text Host
Posted by Marios at 4:37 AM 17 comments: