Ian And Sylvia - The Beginning Of The End (1971 canada, wonderful country folk rock) 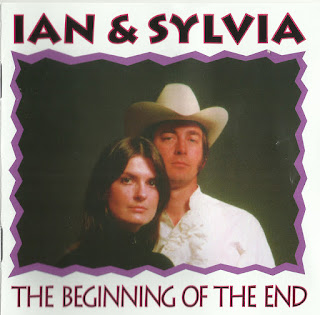 Born in Victoria, BC in 1933, it wasn't until he was a teen, laid up in a hospital after a rodeo accident, that Ian Tyson picked up a guitar for the first time.Once the broken leg mended, he continued learning the guitar, and always a poet and writer, began writing songs.

While attending the Vancouver School of Art, he made his singing debut at Vancouver's Heidelberg Cafι in 1956. Realizing he might be able to afford his education, he continued playing, and later joined The Sensational Stripes. They were an up and coming rock and roll band made up of other students at UBC and gave Tyson a better exposure to different sounds.

Still pursuing his artistic dreams, he moved to Toronto and got a job as a commercial artist once he'd graduated from the VSA in 1958. Taking advantage of the burgeoning folk scene in Yorkville, he made ends meet by performing in the local clubs.

In 1959 he was introduced to Chatham, Ontario's Sylvia Fricker, another folk singer trying to make it in the big city. They hit it off, and by that summer were performing together at the Village Corner, first part time, and eventually they were a full-fledged duo, one of the hottest on the scene.

They married in 1961, and over the next year earned a loyal following while working their way out of the dimly lit Toronto clubs and coffee shops throughout the US northeastern seaboard, and were frequent performers at festivals, including their first of many appearances over their careers at the famed Mariposa Folk Festival in Orillia, Ont.

After moving to New York in '61, they were performing in Greenwich, when Albert Grossman, Bob Dylan's manager, saw and liked the act. He offered to represent them, and soon after he sent the duo off to expand their territory, where they played throughout the Chicago/Detroit area and onto the west coast.

Grossman helped land them a deal with American based Vanguard Records, who released their self-titled debut in the summer of 1962. It was the first in a long line of records throughout the decade that transcended folk and country, delving into blues and early pop. Covers of "CC Rider," "Down By The Willow Garden," and "Handsome Molly"were mixed in with early signs of what would become a legendary waving of the Canadian music flag, with the 19th century standard "Un Canadien Errant" and "Pride of Petrovar." That song also showed their range from fast tempo two-steppers to the slow, melodic "Got No More Home Than A Dog" (a traditional hobo song), and the prison work song "Rocks And Gravel."

In early 1963 they released what has been heralded as some as the greatest Canadian song ever written, "Four Strong Winds." The title track to their sophomore record, the album barely made a dent in the charts on either side of the border, but the song has been covered by everyone from Bob Dylan and Neil Young to a Swedish version by The Hep Stars. Performed by an ensemble cast, it also still traditionally closes out the Edmonton Music Festival each year.

The rest of the album was another mix of French Canadian songs, ("V'la L'bon Vent"), the Scottish ballad "Every Night When The Sun Goes Down," a cover of Dylan's "Tomorrow Is A Long Time," and another old traditional prison work song from the deep south, "Poor Lazarus". "Jesus Met The Woman At The Well" and "Every Time I Feel The Spirit" also showcased the duo's gospel's roots.

Their second album of '63 was met with mixed critical reviews, as well as public reaction. NORTHERN JOURNEY made the top 40 at home, but only peaked at #70 in the US. Backed by Ian's cowboy lamenting in "Texas Rangers" with a capella for a base. It also featured the sing-alongs "Moonshine Can" and "Little Beggar Man," the gospel standard "Swing Down Chariot," and Sylvia's first solely written and recorded song, the reflective "You Were On My Mind," which was later covered by Bobby Bare, San Fransisco's folk/rock band We Five, and then British pop star Crispian St. Peters.

The Tysons had met Gordon Lightfoot earlier in their respective careers, and 1964's EARLY MORNING RAIN featured a pair of his songs - "For Lovin' Me" and the title track, which went peaked in the top 40 at home but only made it as high as #77 in the US. Johnny Cash's "Come In Stranger" is one of the few other covers on the record, the first time the duo had recorded mostly their own material, centred for the most part around Canadian roots, such as "Travelling Drummer," and also often with a political undertone, as in "Song For Canada," co-written with Ian by future CBC journalist Peter Gzowski.

After moving back to Canada later that year, they took time off to have their first child, Clayton Dawson Tyson, in the spring of '65. They didn't return to the studios until later that year, releasing PLAY ONE MORE. Felix Pappalardi, arranged, contucted, played bass and assisted in production of the record, which leaned more towards the pop spectrum than its predecessors. The cover of Burt Bacharach's "24 Hours To Tulsa" and the title track showed a fuller band sound than what fans were used to, and the shift in direction translated to less than expected sales. Further evidence of experimentation was evident with the organ in Sylvia's "Gifts Are For Giving" and Ian's "When I Was A Cowboy." Unlike previous records, this one had no adaptations of traditional folk songs, but the more typical sounding music from them was showcased in "Changes," with its standard guitar and autoharp, and "The French Girl," with the accompanying string arrangement and banjo drives "Molly and Tenbrooks."

Wanting out of their record deal with Vanguard anyway, they experimented with the blues on their next project, SO MUCH FOR DREAMING. Released in the fall of 1966, the record was all but a flop with the fans and critics alike, with Sylvia singing lead on much of it, including "Catfish Blues" and "The Circle Game." "Come All Ye Fair And Tender Ladies" was a minstrel-like ballad Ian penned, and other tracks included the occasional nod to the seafaring life they liked to do with "Cutty Wren," and "Summer Wages."

Their first album for new label MGM was THE LOVIN' SOUND in the spring of '68. They brought in new producer John Court with the intent of coming out of the studio with a more pop accessible album. Even the title reflected the change, a spin on The Lovin' Spoonful, one of the hottest pop groups at the time. The lead-off "Windy Weather" was criticized as being nothing more than a conglomeration of The Association's "Windy" and The Mamas and Papas' "Monday Monday." But sticking to their folk roots, they also covered Dylan's "I Don't Believe You," although it too was criticized for its flower power arrangement. The one straight out country song was a cover of Johnny Cash's "Big River."

Looking to make a straighout country album, they packed up and made Music City their new temporary home. But while writing the material, they were informed they were still owed Vanguard Records one more album. Their contractual obligation was filled before '68 was up with the appropriately titled NASHVILLE. Abandoning all other experimentations, they hired producer Elliot Mazar and released a straighout country album, which featured another pair of covers of Bob Dylan's - "The Mighty Quinn" and "This Wheel's On Fire," and made great use of strings as backup, in tune with the changing landscape at the time of country music.

They were already in the middle of an exhaustive year-long tour when FULL CIRCLE was released. The album was more experimental in previous records, as office execs had pretty much given the duo creative control carte-blanche, and the result was sort of a free-flow, new age country/western experiment. The lead off "Here's To You" sounded more like a pop arrangement with a steel guitar just to make it a country song. Also included was the obligatory Dylan cover "Tears of Rage" and a remake of "Mr Spoons" from the previous album, a song about their son Clay.

Reworking their stage show on advice from the suits in the office, they assembled a new straight country backing band with Amos Garrett, Buddy Cage, Ken Kalmusky, and ND Smart, and now dubbed themselves Ian Tyson & The Great Speckled Bird, which quickly began touring the continent, including the high profile live events like the Atlanta Pop Festival and Festival Express 1970.

After a double album greatest hits package, the '70s opened with the album GREAT SPECKLED BIRD on the ill-fated Ampex label. Produced by Todd Rundgren, it was too experimental for the mainstream, and it came and left the scene just as fast. Sylvia's "Trucker's Cafe," was a formulatic heartbreak tune, the waltz inspired "Flies in the Bottle," the upbeat "Love What You're Doing Child," and the gospel inspired "We Sail."

Their second album entitled IAN & SYLVIA in the spring of '71 was their first with new label Columbia. Each took turns churning out more country flavourings, but less as an actual harmonized duo. Sylvia's slow bluesy feel to "Midnight Barney" to Ian's tale-telling in "Lincoln Freed Me," to the remake of "Summer Wages" from the SO MUCH FOR DREAMING album and the cover of the folk standard "Needle of Death" didn't translate particularly well in sales, and stalled before making the top 50 on either side of the border. The first single was "Creators of Rain," and was followed by "More Often Than Not," which gassed out at the #22 spot in Canada.

Their last album together of original material came a year later with YOU WERE ON MY MIND. Sylvia's title track was a remake from an earlier album, and would be a comeback of sorts. Their last single together, it reached #4 on the Canadian chart. After moving back to Toronto, they began hosting a CTV variety show called "Nashville North" for two seasons, beginning in '74. The duo played their final public performance in 1975, and went through a relatively amicable divorce later that year.
Canadian-Bands 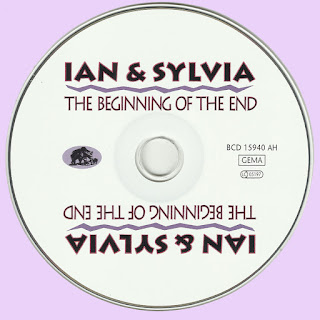 Free Text
Text Host
Posted by Marios at 7:24 AM 8 comments: