Truth - Of Them And Other Tales (1969/70 us/uk, superb psychedelic rock from Them members) 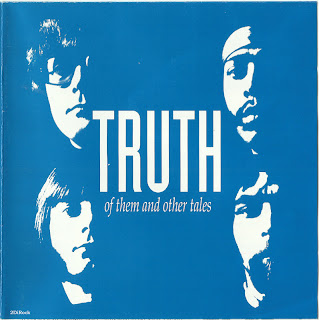 Truth is one of the more obscure twigs on the amazingly vast tree that grew out of a 1964 Belfast hoodlum r'n'b act first (and last) known as Them. You've heard the great Van-era recordings, the even greater Belfast Gypsies recordings, the inconsistent but occasionally brilliant Texas-era recordings -- but prior to this CD you're unlikely to have heard this Chicago-based franchise, featuring guitarist Jim Armstrong and vocalist Kenny McDowell from the Belfast/Texas incarnations of the band, lured back to the US by a music biz impresario circa 1969. The ex-Themers teamed up with two local musicians and Truth was born, rehearsing like crazy and playing local Windy City gigs with some success. I'll refer to John Berg's very detailed liner notes for the full story and move on to the music.

The bulk of the 14 songs contained on the CD are 1969 recordings made for a movie titled "College For Fun And Profit" in which the band can actually be spotted in one scene. The remaining tunes come from a 3-track acetate recorded for a prospective Epic LP that never happened. According to Jim Armstrong "Truth was the best band I ever played in. There was no pulling in different directions". It's not hard to believe him, because that's what Truth sounds like -- skillful musicians delivering music that radiates warmth, harmony and synchronization.

If this sounds a bit like vintage Grateful Dead then all the better, because there is a distinct similarity between the Dead of, say, "China cat sunflower", and the airy, good-natured guitarpsych of Truth. Not much is said about the band's influences in the liner notes but if I were to define them in terms of a pin placed on a wall-map of the USA, the spot would be Highway 1 halfway between LA and the Bay Area. There is already a pin there, marked Stalk-Forrest Group, and apart from the Dead that's one band that Truth remind me of.

Impressive credentials for sure, but Truth needn't be embarrassed in this company, because their music is faultless and at its best outright stunning. So very few bands manage to play music that allows space for the members full range of versatility without degrading into prog or fusion; Truth manage to do so and still deliver melodic, open-ended music. The opening "Music is life" is a program declaration as good as any; complex rhythms and bold chord shifts, yet as inviting as a Byrds 45 with McDowell's joyful vocals setting the tone for all that follows. "6 O'Clock Alarm" is your standard white-collar grind lament except with a 5-minute Garcia/Lesh-style jam in the middle, before the vocals pull you back to planet Earth.

I have to refrain myself from describing every track in detail but all of it progresses along the superb '69 Dead/Stalk-Forrest axis described above; an exquisite sitar track adds a foreign flavor, while the 10-minute revisit to the Texan Them's "Square room" shows just how good raga rock can be if done with serious intentions -- like a sequel to "East-West" by the Butterfields 3 years earlier.

There is another great track called simply "HIGH!" which is how you feel when hearing it, and a take on "Circle round the sun" that suits the band very well. The CD closes with the 3 tracks off the aforementioned acetate, and they're just as swell, bringing in organ and flute and a slight British influence (think Traffic) to produce one of the very best tracks on the entire CD, the powerful "Castles in the sand" that is likely to blow anyone's head off. There is some very minor surface noise on the acetate tracks while the earlier recordings are crystal clear and can be played loud as fuck!

Most of the unreleased 1960s-70s stuff that appears is disappointing and shows mainly why it wasn't released in the first place, but this Truth CD is the perfect antithesis of that cynicism -- just like Stalk-Forrest Group it's better than almost anything that WAS released at the time.
by Patrick The Lama 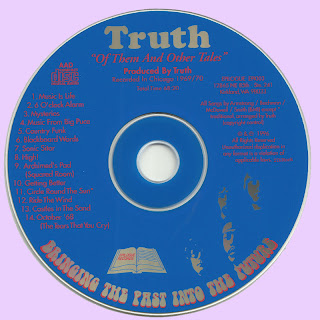 Free Text
the Free Text
Posted by Marios at 2:02 AM 9 comments: