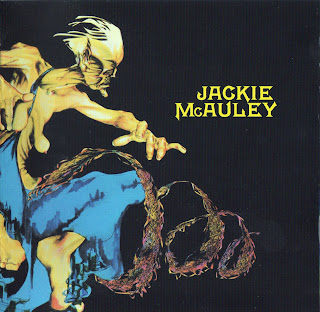 Jackie McAuley's debut solo album Jackie McAuley first released in 1971 is a minor masterpiece, a beguiling mixture of moods with shades of folk-rock, blues and jazz. The album has been somewhat unjustly overlooked as history has continued to praise Trader Home's magical Morning Way, recorded with Judy Dyble the previous year.

The early recording career of McAuley - a gifted original singer and musician - is a confused tale of short-lived projects and missed opportunities. Jackie McAuley was born into a very musical family in County Derry, Northern Ireland surrounded by traditional Irish music. In 1964 Jackie and his elder brother Patrick moved to London and joined Them - Belfast's finest r'n'b band with Van Morrison. Them were plagued with personnel problems, Jackie's tenure as the group's organist was brief - confusions over who played on the group's influential early recordings has been the subject of hot debate for many years.

Whilst in London, Jackie made the acquaintance of one of his musical heroes - the American rock & roll legend Gene Vincent; "Gene really was the one who gave me the confidence to write my own songs". McAuley soon found himself in Dublin fronting a blues band with Paul Brady - later of the Johnstons and Planxty. Sometime in late 1966, when Pat McAuley finally exited the turbulent Them, the brothers formed a new band together with Mike Scott and Ken McLeod. In London they met the American record producer Kim Fowley, a longstanding fan of Them, who christened them the Belfast Gypsies, and signed with the hip Island label.

The Belfast Gypsies recorded a pair of singles for Island, but discographical confusion continued. Their first 45 - 'Gloria's Dream' / 'Secret Police' - appeared in October '66, the second single - 'People, Let's Freak Out' / 'Shadow Chasers' • followed two months later appearing confusingly under the name Freaks Of Nature. The 'A' side had overdubbed percussion by Soft Machine's Robert Wyatt and Island A&R executive Guy Stevens. The Belfast Gypsies went on to complete an album which finally appeared in Scandinavia under the title Them Belfast Gypsies' in 1967.

Determined to pursue his own musical vision, McAuley then began recording a solo album with help from some of the best young jazz musicians of the time. Most of the players were recruited on the suggestion of the label's in-house producer Barry Murray. Mike McNaught, Tony Roberts and Mike Travis were all members of the Henry Lowther Band which had recorded the acclaimed 'Child Song' in 1970. Renowned jazz trumpeter Henry Lowther had played with the original Mike Westbrook Band and with John Dankworth's Big Band.

In the sixties Lowther had also worked on the rock scene with Manfred Mann and John Mayail. and appeared at the famous Woodstock festival in 1969 whilst a member of the Keef Hartley Band. Flautist Tony Roberts was an alumni of Alexis Korner's genre-defying Blues Incorporated and regularly recorded with John Renbourn and many of the most innovative innovative Londonbased jazz composers, On double bass they hired Roy Babbington, an ex-member of Delivery, currently playing with Ian Carr's Nucleus and a busy session musician - recording with Harvey Andrews, Mike D'Abo, Keith Tippett and Soft Machine among many.

The rhythm section was completed by Mike Travis from the Canterbury-based Gilgamesh and Pete Hossell, an acclaimed jug player. Hossell was well-known on the British blues scene, a founding member of the Panama Limited Jug Band, in 1969 he appeared with Ian Anderson's Country Blues Band on their 'Stereo Death Breakdown' album. The orchestral arrangements for the album were by keyboard player Mike McNaught.

He'd recently been the musical director for the London stage production of Harry Nillson's The Point' and would go on to have an eclectic career recording with B A Robertson, composing songs for children's television series like 'Rupert' and arranging songs for the Monty Python albums The Meaning of Life' and 'Monty Python Sings'. Jackie McAuley was issued by Pye Record's Dawn imprint in July 1971. All of the songs had been written by Jackie before the recording began.

The album includes one non-original, a fine cover of Leadbelly's 'Poor Howard': "Since I was a kid, I've always been a big fan of Leadbelly, Robert Johnson, Woody Guthrie... all were great songsmiths" recalls McAuley, "the sessions were great. I have good memories of that recording, they were great players." 'Country Joe' is a gentle portrait of another of McAuley's heroes - Country Joe McDonald of 'and the Rsh' fame.

Dawn released two singles to promote the album - 'Turning Green1 / 'It's Alright' (DNS1011) and 'Rockin' Shoes' / 'One Fine Day' (DNS 1020). However, McAuley was reluctant to undertake live gigs at the time, like so many singer-songwriters he suffered the familiar quandary - he didn't have a band to take the album arrangements on the road, and felt that solo performances would not do the material justice.

Sadly the album failed to find the audience it deserved and quickly disappeared from the market. McAuley soon found work as a session player, recording with Jim Capaldi, Rick Wakeman, Bryn Haworth and many others, later he was musical director of the Lonnie Donegan band. 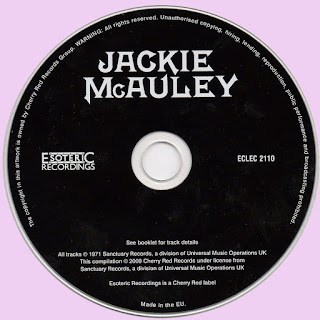 Free Text
Text Host
Posted by Marios at 9:39 AM 12 comments: