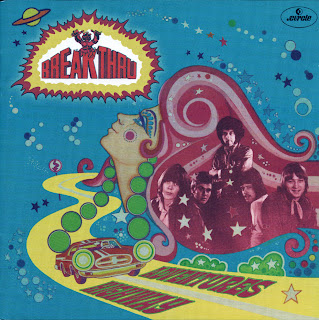 Breakthru were a powerful live act who never managed to "break through" into the record charts despite a talented and charismatic line-up.

Breakthru never managed to have an album released of their own which was unfortunate as their only record was a solitary single "Ice Cream Tree" that has since appeared on various 1960s compilations. The group were never happy with the single as it was not a good representation of their "sound", and particularly as the song was not composed by the band themselves.

All the group members were actively involved in song writing with some of this backlog occasionally committed to tape whenever time and money would permit. Now, decades later, the previously un-released recordings they made have been assembled into the one and only Breakthru album titled "Adventures Highway". This collection the band members say, represents how they would like the group to be best remembered.

"Adventures Highway" was assembled from a combination of unreleased-demos, BBC sessions, and surviving recordings from the results of various excursions into the studio by the group between 1967 and 1970. Side one kicks off with the high-energy group-composed Believe It from 1970. You can just imagine the band going all out on this one with its high-energy blues-driven attack.

Here Comes The End from 1967 is a lot more psychedelic sounding with abundant echo effects but still very powerful. The bluesy cover of Willie Dixon's Spoonful really gives an indication of what Breakthru were all about. Gary Aflalo's blues-harmonica playing on this one is exceptional against a backdrop of thundering hammond organ and distorted guitars. If you really hate your neighbours then this is the one to play loud!

Love Is Strange starts out with some crashing guitars/bass/drums highly reminiscent of The Beatles Rain. This one is supposedly based on the Everly Brother's version of the song and features both Gary Aflalo and Keith Abingdon doing a good job harmonizing on the vocals.

This is followed by the album's title track Adventures Highway from 1968 and what a number it is too! Menacing hammond organ joined by pounding drums and guitar build into a climax of sheer volume that soon becomes a backdrop for spaced-out lyrics; Oh let's get transmitted, there's no planet that's too far. We'll see Jupiter and Mars, we'll see strange and weird sights on our space bound trip tonight... (make of it what you will).

We then go right into The Story Of Peer Gynt with its opening riff taken directly from Hall Of The Mountain King (almost seems like a tradition amongst Brum bands to pay tribute to classical music at some time or another). This rocking track was considered for single release at the time but for some reason it never happened. A pity as it would surely have made a good follow up to Ice Cream Tree.

The remaining tracks on the album were recorded in 1970 at London's Piccadilly studios. Although the group were on the verge of splitting by this time, they recorded (ironically) what are regarded as some of their best tracks. Alice Dropped Out from these sessions, would have made a fine single. As one of several Breakthru tracks co-composed by Keith Abingdon and Richard Thomas, this one is a driving blues-rock number with guitars very much at the forefront and the trademark hammond absent. This would have been a powerful one when performed by the band live.

It is followed on the album by Happiness which shows the band could still be tuneful in a commercial direction when they wanted to. Shake Off That Lead is another such radio-friendly track that bounces along with a catchy keyboard-driven melody.

The final track on the Breakthru album is titled Sailor Song. A wonderfully harmonious partnership of keyboard and guitar, and as the title suggests, the lyrics tell of a seafaring character who would rather spend his life out on the ocean rather than be troubled by the problems experienced by those on land. Maybe it's meant as an expression of ultimate freedom (or freedom of expression) that seems to run through the groups music from start to finish on these collected tracks that make up the Breakthru album.

The Circle Records "Breakthru" album package serves as a fine tribute to one of the West Midlands great performing groups of the late 1960s. Breakthru were one of those bands who were at the leading edge of the pop music revolution at a time when innovation and the growth of new musical ideas was reaching its peak during the 1960s. "Adventures Highway" fulfills a dream they had back then and this time you can join them on their journey.
Brum-beat 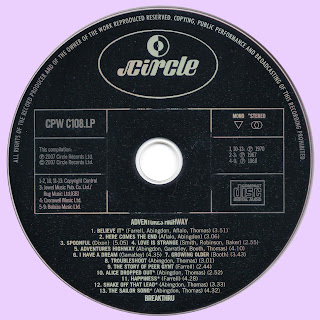 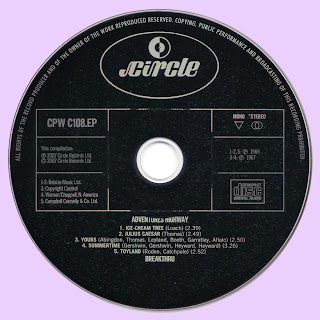 Free Text
Just Paste
Posted by Marios at 7:56 AM 5 comments: