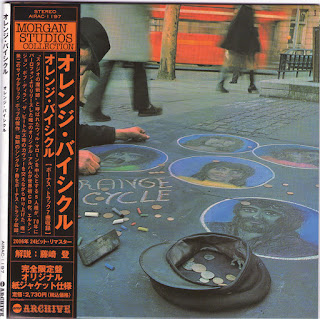 The British psych-pop outfit known as Orange Bicycle evolved from a Beat group, Robb Storme & the Whispers, also known as the Robb Storme Group. They had recorded a handful of harmony pop singles for Pye, Piccadilly, Decca, and Columbia Records during the early '60s, but with little success. In 1966, the Robb Storme Group covered the Beach Boys' "Here Today."

It was arranged by the band's own multi-talented keyboardist/producer Wilson Malone and produced by Morgan Music's co-owner Monty Babson at Morgan Studios in the Willesdon area of London. With psychedelic music at its zenith, the group decided to change its name change and, in 1967, re-emerged as Orange Bicycle. Over the next few years, they released a half-dozen singles; their first single -- "Hyacinth Threads" -- remains the band's best-known track, appearing on numerous compilations.

In late August/early September 1968, Orange Bicycle -- wearing matching black and orange suits -- performed at the Isle of Wight music festival, reportedly covering songs by Love and the Rolling Stones. In 1970, already somewhat past its prime, Orange Bicycle recorded its only album, The Orange Bicycle. It was comprised largely of covers, including Elton John's "Take Me to the Pilot," Bob Dylan's "Tonight I'll Be Staying Here With You," and Denny Laine's "Say You Don't Mind." A few tracks were produced by John Peel. Psychedelic pop music, however, was on the wane, or transmogrifying into heavier prog or hard rock, so the group decided to call it a day, breaking up in 1971.

That same year, they covered the Beatles' "You Never Give Me Your Money" for All This and World War II. Malone then went on to become a top producer/arranger on his own, working with many successful groups and solo artists. His string arrangement for the Verve's "Bittersweet Symphony" (which appropriated the symphonic arrangement from the Rolling Stones' "The Last Time") caused a ruckus that resulted in Andrew Loog Oldham suing the Verve for songwriting royalties. In 1988, the Morgan Bluetown label issued an Orange Bicycle compilation, Let's Take a Trip On..., which contained all of the band's Columbia singles but no Parlophone-era recordings.
by Bryan Thomas 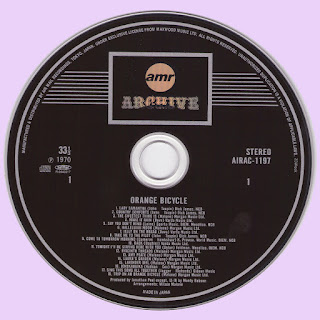