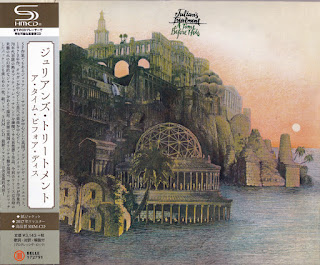 Julian's Treatment is yet another forgotten and obscure gem of progressive and psychedelic rock. Not very often does a sci-fi author involve himself with music. Michael Moorcock's involvement with Hawkwind is one of the best examples. And Julian Jay Savarin is another author who involved himself in music, with this band Julian's Treatment. Savarin played the organ and he had an Australian named Cathy Pruden to handle the vocals, with some other guys to handle the guitar, bass, drums, and flute (no liner notes were included, unfortunately).
A Time Before This, released in 1970, was the one and only album by this band (Savarin released an album under his own name called Waiters on the Dance, which varying sources say was released in 1969, 1971, or 1973). Unsurprising, the album is a sci-fi concept album, a bit difficult for me to follow when a lyric sheet wasn't even included, but it seems to involve the destuction of the Earth in which a Terran ends up on a planet inhabited by strange, blue-skinned people, and an evil megalomaniac. Musically, it's late '60s sounding psychedelic with progressive rock with great spacy organ and a cosmic feel to the whole album. Great female vocals as well with the occasional spoken dialog. Highlights include "Phantom City", "The Black Tower", "Altarra, Princess of the Blue Women", "Twin Suns of Centauri", "Alkon, Planet of Centauri", "The Terran", "Fourth From the Sun", and "Strange Things".
All the music sounds like it should belong on some campy sci-fi film from the late 1960s, but that should not come as any surprise. One band that Julian's Treatment gets compared to is The United States of America, the American band that released an self-entitled album in 1968 that featured Joe Byrd and Dorothy Moskowitz. Also comparisons to such prog rock bands lead by female vocalists like Analogy, Sandrose, and Holland's Earth & Fire are pretty common as well. Which is safe to say, if you're a fan of any of these groups, chances are you'll like Julian's Treatment, a great lost gem that sure to grow on you. The original LP (released in Britain by Young Blood and in the U.S. on Decca) isn't exactly easy to come by, but regardless, this album is another excellent obscure gem to add to your collection.
by Ben Miler 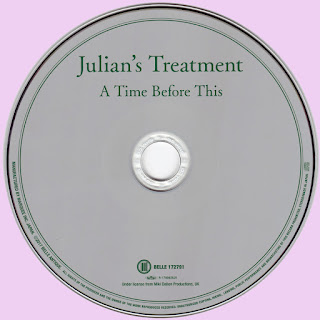