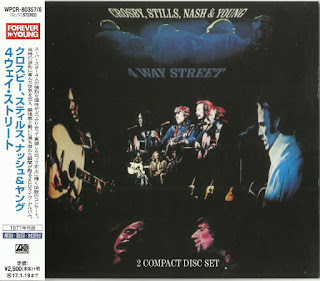 Seldom in rock history have four guys who seemingly couldn’t stand each other sounded so good together as Crosby, Stills, Nash and Young did on their 1971 double live album 4 Way Street. There have been plenty of great bands that thrived on creative and personal conflict, from the Kinks to the Ramones and beyond, but in most cases the battles were mainly between two of the members, usually the ones occupying the front line. But with CSNY there were four frontmen, and at various points during their time together, they apparently longed to defenestrate each other.

For a band of SoCal hippies, they sure were a fractious bunch; there were feuds between just about every member at one point or another. All these years later, Graham Nash dropped the F-bomb in reference to David Crosby during an interview, declaring the walrus-mustached balladeer persona non grata. So it’s amazing the extra-fragile four-man version of the lineup stayed together long enough to play the concerts captured on 4 Way Street, let alone the fact that they contain some of the strongest music any of them ever made, alone or together.

Against the odds, CSN had managed to improve upon the wheel by adding Y for the follow-up to their debut album. Déjà Vu managed to up the ante considerably thanks to Neil Young’s contributions. Three months after that record’s release, the quartet was out on tour playing the dates documented on 4 Way Street. Songs from shows at New York’s Fillmore East and Los Angeles' Forum in June 1970 and one at the Chicago Auditorium in July ended up on the album, capturing the band in all its fringe-jacketed glory as they opened up the throttle on album cuts and trotted out some still-unrecorded material.

With Young on board, everything got ratcheted up a notch or two. The vocal harmonies went from glistening and pristine to a more ragged-but-right feel, and songs that felt like friendly folk-rockers gained some serious edge and electric bite.

Stephen Stills and Young had been rivals ever since their time together in Buffalo Springfield, but they had always spurred each other on to greater creative heights. That’s the way it worked out here too. The epic six-string firefights they get into on tunes like “Southern Man” (which wouldn’t be heard on a studio record until Young’s After the Gold Rush was released in September) and “Carry On” were unlike anything on either of the band’s first two albums.

It’s the Bay Area bands of the era -- like the Grateful Dead, Quicksilver Messenger Service and Moby Grape -- who are always credited with the mightiest guitar firepower, but when Stills and Young started swinging their axes around onstage, they gave their friends to the north a run for their money.

Half the material on this record would never see the inside of a CSN(Y) studio album at all, such was the roll the members were on at that time; and a number of those cuts were among the strongest in the repertoire, not to mention on the record. Young’s heart-stopping ballad “On the Way Home,” Crosby’s lecherous but hypnotic tale of instigating a ménage a trois, “Triad,” and Nash’s indignant broadside “Chicago” all fall under that category.

The band was at its most politically charged at that point too, which was only natural considering the turmoil the country was in at the time. It was late 1969 when Bobby Seale was bound and gagged in a courtroom during his trial for inciting a riot at the 1968 Democratic convention in Chicago, an event that inspired the aforementioned Nash song. And the horrific Kent State University killings of four students by National Guardsmen had just occurred in May 1970, moving young to pen the raging “Ohio.”

Stills gets his political licks in too, if a little less specifically, with the crowd-pleasing, piano-pumping clap-along medley “49 Bye-Byes/For What It’s Worth/America’s Children,” name-checking Richard Nixon, Spiro Agnew and Chicago mayor Richard Daley and shifting the Springfield-era “For What It’s Worth”’s focus from the Sunset Strip to something more all-encompassing.

4 Way Street was a huge hit, topping the album charts and earning an even bigger audience for the band. But it was also the beginning of the end, at least for a while. By the time the tour was over, the foursome had had enough of each other, splitting to pursue various solo and duo projects. Crosby, Stills, Nash and Young didn’t perform together again until 1974, and it wasn’t until 1977 that another studio album (minus Young) was released.

But for all the acrimony fouling the band’s artistic ecosystem, there’s no denying the fact that they followed one of the finest studio albums of the era with a live album that was arguably even better, setting a high bar for the many double-length concert albums to come over the course of the decade.
by Jim Allen, April 5, 2016 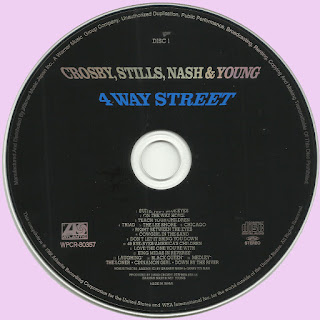 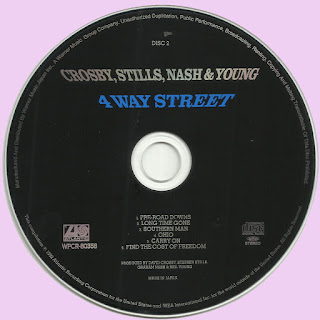