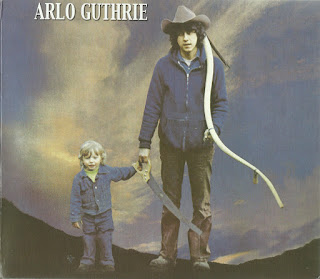 Arlo Guthrie's seventh record follows a formula that he'd been developing over the past several years -- a handful of interesting originals mixed with a song or two by a legend, something traditional, a couple of jokes, and one of Dad's tunes. Guthrie's fondness for nostalgia mixed with his '60s idealism could turn such predictability into folky mush, but things are kept fresh by his strong sense of tradition, commitment, and taste, along with his growth as an artist in general. As far back as Alice's Restaurant, Guthrie proved himself to be an affable performer, but the 1970s showed an added depth and maturity with each new release.

The Nixon diatribe "Presidential Rag" and the Mideast peace plea "Children of Abraham" bookend Woody Guthrie's "Deportees" nicely, while Jimmie Rodgers' "When the Cactus Is in Bloom" is a good fit with Arlo's bucolic tales "Me and My Goose" and "Bling Blang." Elsewhere, "Nostalgia Rag" hints at Randy Newman, "Go Down Moses" has the backing of a full gospel choir, "Won't Be Long" sports a country feel, and "Hard Times" is mountain music. Along with producers John Pilla and Lenny Waronker, Arlo chooses from a cream-of-the-crop collection of musicians to pull off this eclectic mix. And it's to his credit that he's successful more often than not. Though there's nothing drastically different here for Guthrie, the album continued a steady growth through the '70s, which placed him firmly at the doorstep of what would be the pinnacle of his career.
by Brett Hartenbach 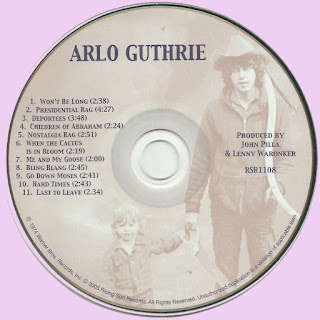 Free Text
the Free Text
Posted by Marios at 9:47 AM 5 comments: