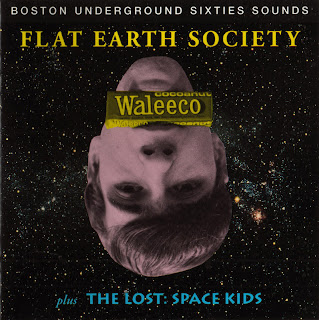 It's strange how sometimes art is created when you least suspect it. Take for example two innovative Sixties rock bands from Boston, Massachusetts, namely the Lost and The Flat Earth Society. Both groups were hired by prominent New England organizations to produce original music for commercial products. Specifically candy bars and cereal.

In the winter of 1968, the Boston advertising firm Quinn and Johnson contracted a young rock group from Lynn to produce both an album and a jingle for their client, the F. B. Washburn Candy Company. Inside each Waleeco candy bar that year was a mail order coupon that advertised the Flat Earth Society's "Stereo LP Record Album"for $1.50 and six candy bar wrappers.

This premium was marketed by Fleetwood Recording Studio in Revere and was released on their own custom label. Although it's unknown how many units actually sold it's an inevitable fact that in 1974 Fleetwood threw out scores of 25-count boxes of the LP in the dumpster. Luckily the mastertapes have survived and film that the agency shot of the band during a recording session still exist. The"Waleeco" jingle that graced the radio waves back then seems to have gone the way of the pterodactyl but fans should note that it was a sixty-second adaptation of Four & Twenty Miles.

Now for the first time, the "tru-fidelity" stereo mixes can be heard as they were originally intended. When the album was mastered back in 1968, the engineer destroyed the magnificient stereo imaging by blending the two sides together into a mono sound. As you'll immediately hear in this new digital transfer taken directly from the original 1 /4-inch mastertapes, many songs have the basic instrumental tracks on the left while the right channel has the music sent through the "infamous" Fleetwood plate reverb.

A dramatic use of stereo occurs halfway through the opening track Feelin' Much Better, in which a mysterious psychedelic whoosh (actually an aerosal can sprayed into a bucket) slowly pans from right to left and then back again. For better or worse,  imperfections in the crude equipment become obvious with the digital CD format. Overmodulated piano chords show up in the loud moments of Dark Street Downtown. In Satori, the dirt in the faders becomes alarmingly apparent while it was mostly masked by the limitations of the vinyl format (being the last track on a side which is known for having less-than-perfect sound also worked in their favor).

Dated hype on the album jacket notwithstanding, the Flat Earth Society masterfully present a truly eclectic body of work nothing short of brilliant. Devoid of the pitfalls and bad  reputation that the "Bosstown Sound" earned through the passage of time, Waleeco is the perfect period piece capturing a society in transition.

While Barry and the Remains were considering New England’s answer to the Beatles the Lost followed their footsteps of The Rolling Stones. Through never quite achieving sainthood as their friendly rivals did with help of Father Time, the Lost did manage to release three excellent singles for Capitol plus some startling unreleased material that will someday hopefully see the light of day.

Similiarily in 1967, Pat Hall, founder of Children's World Productions hired WGBH-TVs  award winning director Fred Barzyk and national program director Ken Manley and commissioned the Lost to promostly to produce the theme song as well as incidental music for Space Kids, a thirty-minute audio fairy tale.  The band booked time at Triple A  Studio in Dorchester and recorded songs, stingers, mood pieces and experimental sounds which were later incorporated into the final mix.

For the first time ever, we present the entire half-hour production along with the cornplete music track composed by the Lost. Originally conceived as a full length LP, this project was created on spec and intended to be sold as a premium on the back of cereal boxes. After shopping the idea around, the agency unfortunately had no takers. Thus the project was permanently shelved. Or at least until now.

In the decades that have passed, Space Kids seems to have more in common with Buck Rogers than NASA. The story may seem a little campy, but hey, don't Star Trek space suits smack of H. G. Wells? When you get right down to it, good fairytales are basically the same old recycled plot in which good inevitably triumphs over evil. So get ready to "unlock anchor device, reset anchor locking, prime atomic fired rockets, set timing, adjust instruments, automatic navigator prime, radar and tracking cameras checked, set firing rockets, prepare for countdown, begin countdown, 10-9-8-7-6- 5-4-3-2-1-ignition, blast off..." 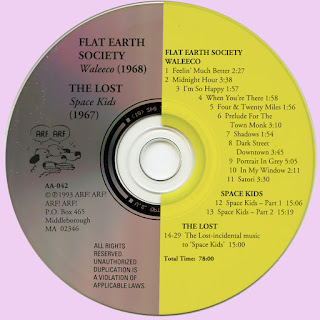 Free Text
Text Host
Posted by Marios at 2:40 AM 11 comments: