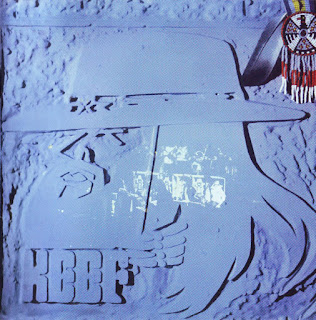 Ever since the critical success of their numerously-populated' album The Battle Of North West Six, the Keef Hartley Band's main man hadmharboured the desire to run a larger ensemble on a more regular basis simultaneously with his small group, and better still etch their efforts into black plastic. Further public acclaim and consequential artistic freedom had favourably manifested themselves over the ensuing; eighteen months, during which period two further studio LPs had nailed their colours to the mast, namely “The Time Is Near”.... (Released: August 197O) and “Overdog” (8th April 1971).

Added to this, thanks to the ever-increasing1 numbers that had been turning: up to catch Hartley's units strutting- their stuff on the boards, his finances had gradually improved to the point that he could bring- the group of like-minded friends who shared his vision tog-ether more often. So it was that while “Overdog” was still fresh off the presses, arrangements were actually being made for its 'expansive' follow-up. Keef s long-time producer Neil Slaven recalled in the mid-Seventies: "The Big Band had begun to play a few dates. It shouldn’t have been economically possible, but audiences quickly proved otherwise.

Of course, it had to be recorded, so in June we used the combined services of the Marquee Club/Studio to tape a couple of concerts. The problems were almost insurmountable, but I think we captured the atmosphere of a typical Big Band gig. They were loose, friendly occasions, but still powerful.' How very true. The repertoire chosen for revisiting was drawn from all three of Hartley's existing studio sets, with emphasis on the first, Halfbreed. Keef s 'registered small group' had latterly been cut to a quartet of himself on drums. Miller Anderson (Guitar, Vocals), Gary Thain (Bass) and Mick Weaver (Keyboards).

This last-named was not in attendance on the nights of 13th/14th June, but would re-emerge amongst a yet further re-shuffled line-up for Hartley's next spectacular. The other three stalwarts were, however, and found themselves augmented by thirteen other musicians, some of whom were decidedly familiar to camp followers. In the brass department sat five trumpeters. Mike Rosen was then currently working on Mogul Thrash's eponymous LP, with contributions to The Bunch's “Rock On” (1972) and Scaffold's “Fresh Liver” (73) just around the corner, while Terry Noonan's impressive C.V. was top-heavy with inserts on Mike Vernon's Blue Horizon label albums.

How does Chicken Shack’s “O.K. Ken”? (68). Champion Jack Dupree s “Scooby Dooby Doo” (69) and Top Topham’s “Ascention Heights” (7O) grab you for starters? Martin Drover's to-be-well-travelled horn was gaining youthful experience for the days when such as Bryan Ferry, Jim Capaldi, Andy Fairweatlier-Low, Gonzalez and Juice On The Loose might make a call, and Mike Davis, who'd recently added his fivepenny-worth to Deram labelmates' Egg's marvellously esoteric The Polite Force was, if he had but known it, destined to blow with, amongst others, Duster Bennett, Georgie Fame and Ramsey Lewis. Harry Beckett, who'd enriched both “Halfbreed” and “Battle” took the solos.

Trombone parts were the responsibility of Danny Allmark and the muchrespected Derek Wadsworth, a gentleman well-known to Manfred Mann, Julie Driscoll, Savoy Brown and Colosseum, to name but four. Certain elements of the reed section knew the numbers intimately, Lyn(n) Dobson, Barbara Thompson and Chris Mercer having all been involved with various forerunning Hartley long-players, so tenor saxist Roger Wade had no shortage of compatriots to compare notes with (pun intended!). Keyboard emissions were fashioned by Derek Austin, and a damn fine job he made of them. Suitably impressed, presumably, were Linda Lewis, Alvin Lee and Chris Thompson s Night, for they dialled him later in the decade, and that leaves only percussionist Pete York.

Long-time backbeat of The Spencer Davis Group, he'd lately also set out a stall with musician/singer/songwriter Eddie Hardin, who'd originally volunteered for the thankless task of replacing Stevie Win wood in the SDG. As The World s Smallest Big Band' the two of them had deposited a couple of remarkable LPs with Bell, but were currently awaiting the imminent issue of one under Deram s parent Decca logo. Meantime. Pete was fully occupied... After mixing, Hartley's aptly-titled “Little Big Band” dream became a reality when SDL 4 fanfared its arrival in British shops on 1st October 1971.

It didn t intrude on the printed best-sellers and, disappointingly for its creator, London Records in the States confirmed that the Deram logo there would not be manufacturing an equivalent, probably because no wholly-new material was displayed within its grooves. Nevertheless, they'd be back on the case when next Blighty's Red Indianchampion donned Ms warpaint as the “Seventy Second Brave”, though he'd be fronting yet another amended 'tribe'...
By John Tracy 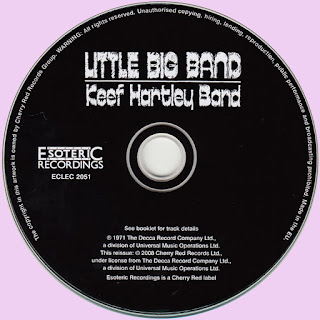