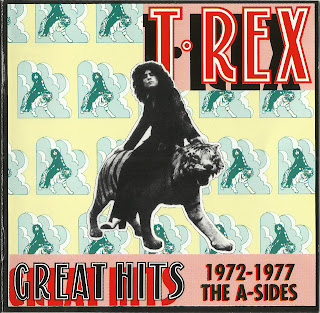 "If there is going to be any revolution in pop, it must come from the young people and if you ignore them, you are cutting yourself off from the life-supply of the rock music force."
(Marc Bolan, November 1970)

By the end of 1970, it was clear that the apparent revolutionary power of the rock underground was going nowhere. Its stars, increasingly enslaved by the chemical favours that came their way, had begun to die off; their riches and fame set them apart from the movement they were meant to represent; and their fashions and music had been assimilated into the wider culture.

They'd become another brick in the wall they once wished to tear down. Marc Bolan, although very much a part of the British underground, never fully bought into the politics of the counter-culture. As the driving force of Tyrannosaurus Rex, a duo which played — cross-legged on Indian rugs — at UFO, Middle Earth and as many outdoor festivals as they could possibly manage, Bolan massaged the underground's escapist wing. He looked like an elfin rag-doll, spoke in a precious whisper, wrote reams of fanciful poetry and sang like a quavering priest from an alien land.

And, unlike many of his contemporaries, he rarely ventured far from the simple songwriting that had inspired him as a youth: three chords were usually enough. Much has been made of Bolan's transition from underground folkie to teen idol, but through his eyes, it was all part of the mosaic of fantasy. In fact, he was fond of saying that his post-1,970 pop career was far more honest than the days when he spun Tolkienesque tales to the hippie hordes, and perhaps he was right.

After 1970, Marc Bolan no longer fed the addled heads of wayward undergraduates; instead, he activated an entire generation of teenagers, setting the controls for as far as they could think. Like the Beatles fans a decade earlier, they screamed, but they also dreamed. Through his image, he encouraged a symbolic refusal of ordinariness, just as his own heroes Elvis Presley and Jimi Hendrix had done.

He once said, "I don't lead an everyday life, but that's nothing to do with being a rock star. I've always been like that." A generation of pop fans took him at his word, and began to create their own personae. It was particularly gratifying, then, to later discover that dozens of gaily-attired punk musicians were inducted into a pop way of life by his example.

The songs on this CD document every single released by T. Rex between January 1972 and August 1977, a period which began with a string of surefire chart-toppers, and ended with his death in a car crash on 16th September 1977. By that time, his successes were hard-earned, but his knack for conjuring irresistible three minute epics out of a clutch of simple chord shapes and a few choice phrases never left him. 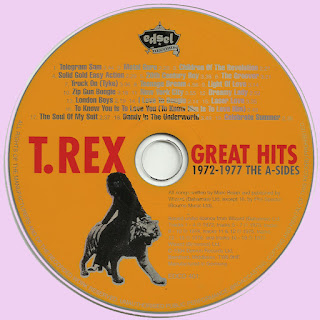 Free Text
Just Paste
Posted by Marios at 11:53 AM 6 comments: