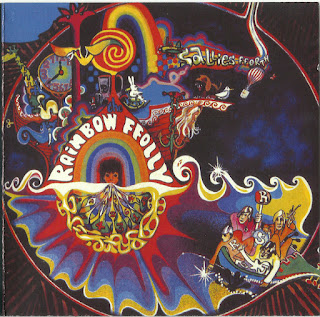 Spectromorphic Iridescence from a Tube of Smarties
For years, Rainbow Ffolly Sallies Fforth, PMC 7050 (stereo PCS 7050), has been the ultimate mystery album for collectors. Mint copies change hands at upwards of £120, an Italian bootleg has been issued, and yet the group members have remained anonymous. Time to unffold the tale of the Rainbow Ffolly, a band influential on the careers of the Moody Blues, possibly the Who and even the Beatles.

The Ffolly's story, with its incredible string of 'ffirsts', is unique amongst groups of the time. Only when it reaches the part where the band is forced to split through lack of income does the tale become the sadly-familiar 'Sixties shot-at-stardom that failed'.

Rainbow Ffolly, an art college band, evolved in High Wycombe, Buckinghamshire, from a group called Force Four. Jonathan Dunsterville picked the new name to conjure up the eye-searing colours associated with psychedelia, doubling the 'f' on Ffolly in tribute to Wally Ffolks, jazz clarinettist and creator of the 'Flook' cartoon strip.

Roger Newell and Stewart Osborn were neighbours who had known each other since the age of three. Later in life they both took up the guitar, but according to Roger: "We found there were loads of guitarists better than us, but few bass players and few drummers."

Roger shrewdly moved to playing bass and Stewart, to drums. In book-binding classes at college, John became intrigued by Stewart's habit of carrying sticks in his pockets and drumming on the desk when he got bored.

"This bloke in evening class going 'chika chika chika bash bash bash!'... (had) to be an interesting character," John realised. "He could play trills and things that no other drummer could do at the time, so I thought, 'that'll do'!"

John and his brother, Richard, came from a musical family, John's guitar skills stemming from finding a ukulele in the loft at the age of eleven. The brothers honed their talents by copying Elvis and the Everlys. When John first considered Roger for the band, he rejected him because he "only looked about thirteen" and was dwarfed by his guitar. Alan Thomas subsequently became Force Four's bassist, leaving after a year or so because he was not in tune with the others' art school ideas. By this time, Roger, whom John describes as "a perfect bass player," had "doubled in size" and finally passed the audition.

Roger recalls seeing John entertaining a group of people in the local park, and thinking:
"'Wow! He plays Scotty Moore stuff!' And (John) 'picked', which was not a style currently in vogue."

Group manager, John Sparrowhawk's claim to fame was that he was the vocalist on the 'Light up a Richmond' cigarette commercial, fondly remembered by Sixties pirate radio aficionados.
The ffull story of the Wycombe group 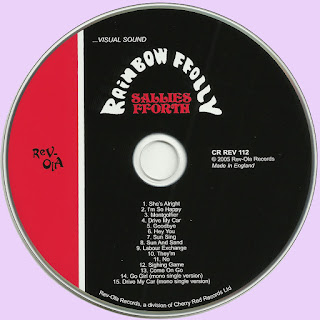 Free Text
Text Host
Posted by Marios at 4:28 AM 8 comments: