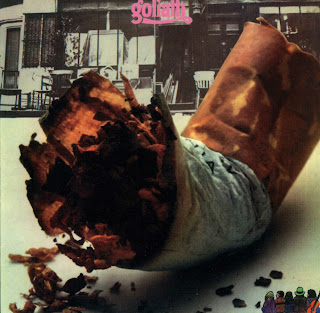 If I were a copy writer for an advertining agency, I would undoubtebly begin these notes with "Goliath are going to be gigantic etc...." Thankfully, I'm not endowed with those powers of literary imagination or the ability to create lines of such propheticsplendour, so I shall confine myself saying that this is a very good first album from an extremely promising group.

Without wishing to cause overt offence to the ladies concerned, I have always been saddened by the strange British yen for "cite" singers such as Cilla Black, Mary Hopkin, Anita Harris and their warblemates. Why haven't we ever produced a Slick or a Joplin? The answer is that to ne open, honest, and free to express emotions is, ludicrously enough, considered to be too unladylike and unrepresentative of the English Rose.

But we are not going to build Jerusalem in this green and pleasant land. It isn't very green, and at times it's very extremely unpleasant. Linda Rothwell owns up, and you can hear it. She's sup[lied with some very strong bass lines by John Williamson, and some definitive jazz overtones from Malcom Grundy's guitar.

These are morsels I have savoured: there are many others you will discover for yourself, like Joseph Rosbotham an flute and tenor and Eric Eastman on drums. There has been a knock on the door from Phil Sanderson, brandishing an obscene weapon and muttering. Goliath are going to be gigantic etc....
by David Symonds 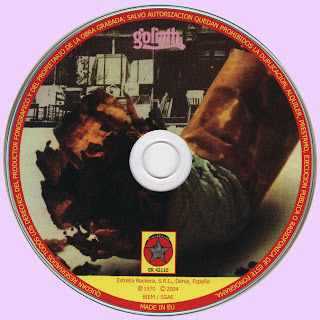