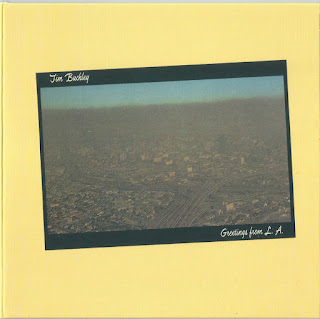 What’s white and twelve inches? Nothing.

It’s studies like this that contribute to the reputation white guys have – perhaps not so unfairly – for being doofuses who can’t jump, dance, or make red hot passionate love. And this view permeates music; if you’re aiming to get down and messy, you’re a little more likely to put on Marvin Gaye’s brilliant Let’s Get It On than Phil Collins’ brilliant-for-different reasons No Jacket Required. (Although if the sound of sexy Phil singing Sussudio makes your chest flush red and your breath get heavy, all power to you).

But there’s one frizzy-haired honky who could definitely pull his weight when it comes to music written between the sheets. With the high cheek bones and refined good looks that would later be seen in his son Jeff, Tim Buckley was that honky. He was totally white – both physically, and for much of his career, culturally – but he could get as hot as Gaye and as wild as Hendrix. He showed the music world that black or white, we all bleed red, and that red blood pumps down to where it counts in the same way for everyone.

With Greetings From LA, Tim is pure sex – cheating and slutting and thrusting his way through seven soul rock numbers. And, at the time, it was a shock. Before Greetings... Tim was a folkie through and through. Sure, he was a little more attractively esoteric, and he was far more willing to mix up his influences than others. But listening to his debut self-titled album – on which he sings sad, innocent, wide-eyed, restrained folk-pop numbers – it’s difficult to imagine he would come out with an album like Greetings….

But we’re all the better for it because he did. While his early albums are extremely attractive thanks to his beautiful, nigh-operatic, earnest vocals, it’s when he gets his groove on that the brilliance of Buckley comes through.

I went down to the meat rack tavern
And found myself a big ol’ healthy girl
Now she was drinkin’ alone
Aw, what a waste of sin

he pumps the words out with a confidence and lusty zeal that no one had heard from him before. It was a revelation. And more than 30 years after it was released, it still is.

Things don’t stop there. The album just gets better. On Sweet Surrender, he explains his predilection for infidelity with notably sleazy self-satisfaction

Now you wanna’ know the reason
Why I cheated on you
Well, I had to be the hunter again
This little man had to try
To make love feel new again.

It’s less an exclamation than a proclamation. He’s going to get his, and he doesn’t care who it hurts. It’s brutal, but he’s putting it out there, and his libido evidently won’t be restrained.

By the time he gets to the album closer, Make It Right, he’s embraced his desires with a relish rarely seen in music. ‘Come on and beat me, whip me, spank me,’ he begs, ‘mama, make it right again.’ Yeah, it’s still on.

Only Nighthawkin’ steers away from sex, but the music doesn’t seem to have noticed the thematic adjustment. It’s still hot, and it’s still heavy, and those guitars are still pumping and the horns are still blowing. Tim talks about a drunk holding a knife to his throat, and for a second, you can see hormones are still on his mind, as he sings as if the rush of near-violence isn’t any different to the rush to orgasm.

Every track is a winner, but it’s Get On Top where Tim really shows us how it’s going to go down. With a killer riff kicking things off, the funk gets so heavy it almost hurts. Imagine the shock when Tim’s folkie fans – used to romantic ballads and tales of broken hearts – listened to a man in the throes of musical ecstasy, reciting a chorus of ‘Get on top of me woman’ – a breath – ‘I just wanna’ see what you learned.’

There it is, right there. Not too slow and not too fast. And it almost hurts because it’s so good. That’s Greetings From LA, and that’s the best album the brilliant Tim Buckley ever produced.
by Anton S. Trees, 14 January 2005 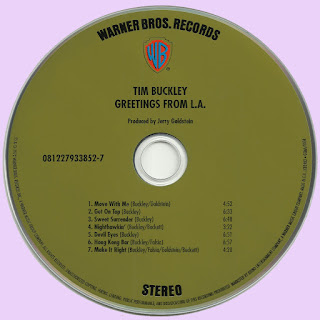 Free Text
Text Host
Posted by Marios at 7:46 AM 2 comments: