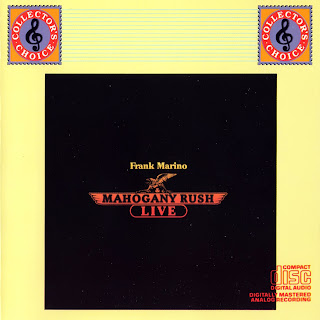 Frank Marino was born in Canada in 1954. He began playing guitar at the age of 13 after having played drums for three years. Very soon after changing instruments, Marino had formed his band Mahogany Rush. By 1971, three years later, the group had developed quite a following. At the age of 17, his first album, MAXOOM, was released and the group quickly started generating a larger and larger following and more albums. In all, by the year 2001, Marino had released 11 albums with Mahogany Rush. He also did two solo albums, 1986's Full Circle, and From the Hip, which came out in 1991. Adding to his credits are also appearances on recordings by April Wine and Brian Lee.
by Gary Hill

Mahogany Rush wasn't as huge a name in 1970s, but the power trio commanded a loyal, good-sized following and provided its share of five-star albums. One of them is this live album, which was recorded during a U.S. tour in late 1977 and came out on vinyl the following year. Mahogany knew how to burn on stage, and this excellent LP really captures the vitality of its 1970s concerts. No one who is seriously into hard rock and metal should be deprived of hearing singer/guitarist Frank Marino let loose on live versions of "Dragonfly," "Electric Reflections of War," and "The Answer." The band is equally captivating on sweaty performances of Jimi Hendrix's "Purple Haze," Chuck Berry's "Johnny B. Goode," and Muddy Waters' "I'm a King Bee."

Some fans were disappointed because Live is a single LP instead of a two-LP set -- many of the gems that Mahogany performed on-stage in 1977 were omitted. The band cites space limitations as the reason, although one suspects that licensing restrictions had something to do with what was and wasn't included. The 1978 "Live" of Mahogany Rush, it is consistently rewarding and is enthusiastically.
by Alex Henderson 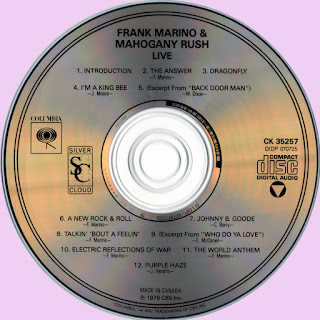 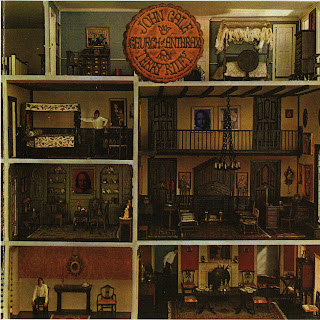 Leaving the Velvet Underground after being a major force on their first two seminal albums, Welsh multi-instrumentalist John Cale forged a collaborative relationship with the band's sometime-frontwoman Nico, resulting in two of her keystone albums, The Marble Index and Desertshore. In 1970, Cale launched his own solo career on Columbia Records with a collection of art-pop songs entitled Vintage Violence. His next for Columbia would be this collaborative album, enlisting master loopist Terry Riley, who was on the roster of Columbia's parent, CBS records.

Many years ago, I once talked with Terry Riley after one of his shows. In our conversation, I mentioned "the album with John Cale," in a sly attempt to elicit some recollections or impressions. His response: "Yes! Church of Anthrax! [half-mirthful, half-exasperated laughter]" That was all.

Despite this inscrutable reaction, Church of Anthrax is a fairly straightforward meeting of the two artists' worlds. The extended instrumentals are easily the best thing about this one. The title track, my own personal favorite, starts off like a jam in the tradition of the VU, with Cale's gruff bass lines prominent in the mix. Over this base, Riley enters with some funky, psychedelic organ that after about a minute and a half, starts going into conniptions, notes jittering like marbles spilling out on a floor every which way. As the piece builds, sax enters flirting with the organ lines and everything gets looser and looser.

The drum work, by the way, adds quite a bit to this track with a jazzy energy and blending with Riley's organ spasms. Another great piece, "The Hall of Mirrors in the Palace at Versailles" places Cale behind the keys, pounding out block chords on piano. To this Riley adds spacey, trilly sax in the A Rainbow in Curved Air vein, one track in each channel, giving the impression of a ritual call between two animals.

Finally, "Ides of March" is a good though somewhat overlong jam split-channeling the duo's keyboard styles. Riley plays treated piano in the left speaker, flittering obsessively and polyrhythmically among certain note cycles. Cale again plonks out alongside this with rhythm piano in the right speaker. Each channel is backed by separate drumming. Written by Cale alone, "The Soul of Patrick Lee" interestingly features an outside vocalist, although the song has Cale's sound stamped all over it in the lyrics and melody, so that you can easily envision him singing it. It's clearly placed in that era of his songwriting, sounding like a decent holdover from Vintage Violence, and also holding the lantern up to Paris 1919.

This strikes me as a pretty interesting pairing of two fellow avant-garders with two quite different personas: Riley, the convivial cosmic explorer of Eastern music; and Cale, the moody mercenary of violence-in-sound. While probably not the best from either artist, it's good for what it is: two legends at work and fairly early in their careers, too.
by Joe McGlinchey 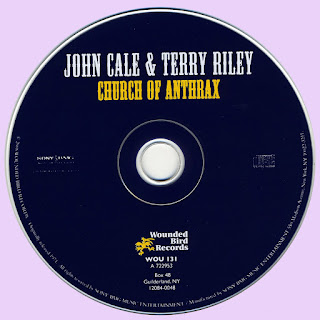 Free Text
Text Host
Posted by Marios at 8:00 AM 5 comments: