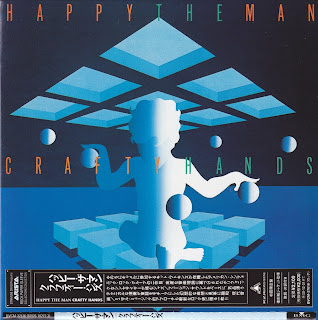 Though never a major success story by any means, legendary US progressive rock band Happy the Man have long been one of the most beloved acts in the hearts of true prog fans for many years. Their debut self-titled album in 1977 for Arista Records should have been the start of a great and lengthy career, but the band split in 1979 not long after the release of their second album Crafty Hands.

Crafty Hands, and really any of the output from Happy the Man, is one part progressive rock and one part jazz-fusion. As the band were basically an instrumental outfit, their style was built on soaring melodies, tight but complex rhythms, and dazzling interplay between the instruments. The line-up for this album was Stanley Whitaker (guitars, vocals), Frank Wyatt (keyboards, sax, flute), Kit Watkins (keyboards, recorder), Rick Kennell (bass), and Ron Riddle (drums). Though you can hear the influence of Genesis, Gentle Giant, Yes, and Return to Forever in the music of Happy the Man, they took those influences and created something fresh and unique with them. Tunes like "Service With a Smile" and "Ibby It Is" have bright, breezy melodies that soar over the top of some challenging arrangements, with Watkins & Wyatt really creating some sensational keyboard tapestries.

Those who love the complex interplay of Gentle Giant will totally get into "Steaming Pipes", and "Morning Sun" is a just a gorgeous slice of keyboard drenched prog rock. "Wind Up Doll Day Wind" would feature the vocals of Whitaker, and though a nice little Genesis styled number, kind of sticks out like a sore thumb here. Much more ambitious are the dramatic "Open Book". complete with some tasty acoustic picking from Whitaker and some lovely flute & recorder from Wyatt & Watkins. "I Forgot to Push It" is an upbeat prog/fusion track filled with intricate guitar/keyboard exchanges, and the album closes with the melodic & atmospheric "The Moon I Sing (Nosurri)", a track just dripping with gorgeous keyboard textures and melodies.

As far as US prog goes, it doesn't get much better than this folks. Crafty Hands is classy stuff all the way, and if by chance you haven't yet stumbled upon either this or Happy the Man's debut previously, then you owe it to yourself to discover them at this very moment.
by Pete Pardo 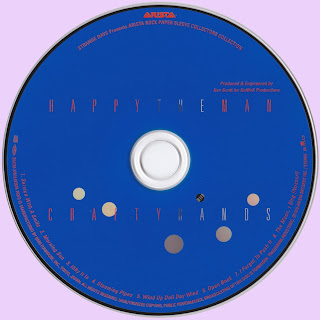