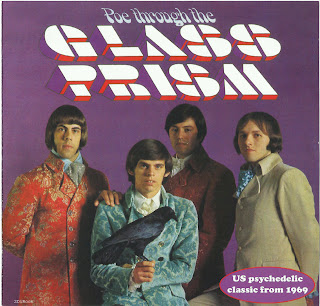 They began in the early 60′s as the El Caminos and spent most of the decade playing gigs around the northeast USA and were popular enough to record a few songs at the Bell Sound Studios in New York.  They were eventually signed to RCA and decided to change their name to The Glass Prism to better suit the concept of the Poe orientated music they were writing.

Taking the words of some of Poe’s poems, Varano and Christiano moulded sounds which could only have been created in the 60′s and in America – that ended up as a very distinct piece of work.  Dominated by the organ sound of Carl Syracuse the songs are littered with piano, drums, electric guitar and bass.

The album begins with a majestic organ and piano led version of “The Raven“.  Not all the stanzas are used but the song encapsulates the brooding nature of the poem.  This was the single from the album and it’s epic nature makes it one of the stand-out tracks on the album.

The second track is a cheesey-funky version of the poem “To -” which has a great drum intro that trips into stabbing organ chords.  It is quite impressive to hear how the band managed to fit the music to the words in a way that it doesn’t sound at all awkward.  The lines are sung effortlessly with the arrangement, to such an extent that it is sometimes difficult after hearing the album to read the poems without singing the melody from the songs.

“To One In Paradise” has a dreamy quality, using a range of vocals and at one point a spoken word verse.  It ends with a classic 60′s organ sound. Another dreamy mood is evident in “Dream Within A Dream” which opens with a soft and slow tremolo effect on the electric guitar supported by a simple rhythm on the drums (Rick Richards) before the downbeat vocals and chiming organ enter the song.  Where “To One in Paradise” was more up tempo and playful in its dreamy arrangement “A Dream Within A Dream” is far more soporific and mournful in its delivery.  “Take this kiss upon the brow, and in parting from you now…” – 0f all the poems used this is probably the one I sing most readily when reading the original text.

With “Eldorado” we’re back to cheesey-funk and like many of the songs on this album it consists of a few chords repeated on the organ, which effectively makes the music pulsate, the other instruments and vocals providing interesting details.  This song was used as the b-side to “The Raven” but it could have been an A-side because it really grooves – you could almost imagine it on a 60′s TV pop show with a load of dancing-girls in brightly coloured mini-dresses.

Another standout track is provided by another standout poem – “The Conqueror Worm“.  Like “The Raven” it has a similarly repetitive but majestic organ and piano lead line which weaves throughout the song, but as always (and as it should be) it is the words, sung with real emphasis, which holds the piece together.

“The Happiest Day The Happiest Hour” is the closest we get to a classic 60′s freak-out.  A splurge from the guitar leads to a frenetic drum break propelling the songs to its conclusion, interspersed with short, slightly less manic moments, where the vocals come to the fore.  The following track, “Alone”, is similarly crazed – a piano and fuzzed lead guitar slowly emerge from the silence, emerging with dueling vocals and a crazed fuzzed bass line.  The quieter moments are like pools of calm sprinkled with twinkling piano and subtle organ.

“Beloved” is guitar led and quite poppy.  It has an interesting arrangement and a great lead guitar break in the middle of the song, sounding not to dissimilar to a forgotten early track by Arthur Lee of Love.

The music on this album cannot escape the gloom inherent in Poe’s words and even the more pop-like or uptempo tracks remain plaintive.  The vocals on “Hymn” glide over the organ which uses the smooth and percussive effects, becoming a little jazzy to the end when the guitar comes in for support.

The album ends with “A Dream” – an up-tempo workout between the guitar, bass and drums, complete with chiming cow-bell.  It has the feel of a hit single but Poe scuppers any chance of it catching on with the opening line:- “In visions of the dark night, I have dreamed of joy departed”.
by Prince Cavallo 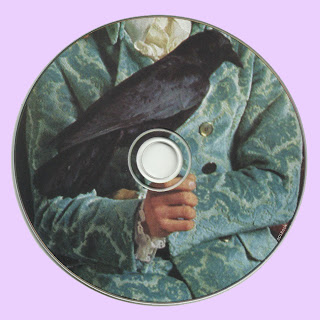 Free Text
Text Host
Posted by Marios at 8:16 AM 14 comments: