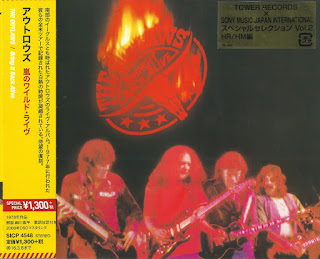 The Outlaws were one of the most enduring and popular of bands to emerge from the great 'Southern Rock' boom in the USA in the mid-70s. The band came from Florida, and their history stretched back into the late 1960s. A more detailed story of how the band coalesced can be found in my note for the Retroworld reissue of their self-titled debut album and their third, Hurry Sundown. Like fellow Southern Rockers Lynyrd Skynyrd, the band boasted a three-pronged lead guitar line-up (known affectionately by their substantial fan base as The Florida Guitar Army) but in Hughie Thomasson, Billy Jones and Henry Paul allowed much more in the way of tasteful Country picking to bleed in as an influential strand compared to the Skynyrd Blues-Rock sound.

The Outlaws were the first Rock act signed to the Arista Records label, an imprint set up and helmed by Clive Davis, the legendary former chief of the Columbia / CBS label, affecting the change of the label emphasis into the contemporary Rock scene late in the 1960s, with such signings as Santana, Johnny Winter and many others. The Outlaws debut album, released in 1975, proved that Davis still possessed substantial commercial nous, when it charted just outside the Billboard US Top Ten album chart. An impressive set of American Classic Rock, it still sounds remarkably fresh, nearly forty years down the line.

However, by the late seventies, the Southern Rock phenomenon was on the wane. The act that kicked the whole shebang into gear, The Allman Brothers Band, had sundered in a morass of drug abuse and allegations of treachery, Lynyrd Skynyrd had been torn apart when several members of the band were killed and some seriously injured in a plane crash, and New Wave Rock was starting to become more of a commercial force (indeed, Clive Davis again showed genuine foresight in his signing of The Patti Smith Group, whose epochal debut album, Horses, was released later in 1975).

Bring It Back Alive released as a double live set, and it frequently indicated that a potential change was on the cards; this proves to be the case with the Outlaws; Bring It Back Alive, like its preceding studio album, Hurry Sundown, had been produced by Bill Szymczyk, with his engineering sidekick, Allan Blazek, who had worked on The Eagles' Hotel California and a slew of other US rockers (such as the J GeiIs Band, Joe Walsh and Santana). The Outlaws would go on to record for Arista and other labels, eventually splitting and reforming. There's still a version of the band about on the US heritage rock circuit, but this pairing of albums shows contrasting sides of their talents.
by Alan Robinson 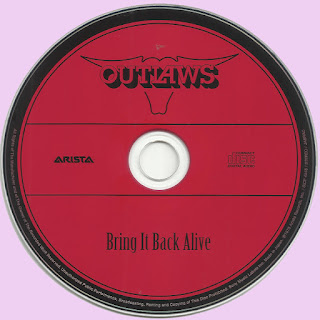 Free Text
Text Host
Posted by Marios at 8:17 AM 8 comments: