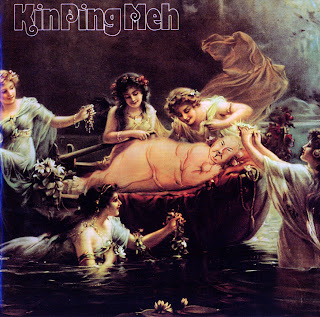 The career of rock band Kin Ping Meh from Mannheim lasted almost exactly seven years and reached quite a few heights. But it still left the band rather disillusioned in the end. Drummer Kalle Weber's resume from the Spring of 1977: "If you're not a pop star, you're still the asshole." Together with amateur musicians Werner Stephan (vocals), Joachim Schafer (guitar, piano), Frieder Schmitt (organ piano) and Torsten Herzog (bass), Weber had formed Kin Ping Meh in 1970.

The name Kin Ping Meh (meaning "branch of a plum blossom in a golden vase") is taken from a Chinese 16th century novel depicting the life and customs of that time. On September 15, 1970 the band gave their first concert. Over the next months, they took part in seven important talent competitions. They won them all and were offered a recording contract from Polydor. From now on, everything went very quick - the important Sunday paper "Bild am Sonntag" had a two-page report about the band in January and their first single was released in February. 'Everything's My Way' made the Top 5 of various radio playlists and March saw the band tour with The Hollies.

In May it was back to the studio to record the second single, 'Everyday'. After guitarist Willie Wagner replaced Joachim Schafer, the band from Mannheim recorded and produced their debut album in autumn 1971, and in December it hit the stores. The band was almost constantly touring at that time and supported acts like Uriah Heep.

The debut album of the Mannheim band was released in December 1971. Producers were Rattles musicians Frank Dostal and Achim Reichel, recording took place in Hamburg's Windrose Dumont Time studio and mixing was done at the Star Studio. Conny Plank, who just made himself a name as a brilliant producer at that time, was the sound engineer. The band had previously released two singles that caused a nation-wide splash. On 'Kin Ping Meh', the band used traditional instruments and line-up and presented eight straight-forward blues-rock songs.

The 11-minute opener, 'Fairy Tales', with its excellent long instrumental part, was followed by 'Too Many People', a straight rock number. 'Sometimes' and 'My Dove' show the musicians in a calmer mood. 'Everything' is a new version of the first single, 'Everything's My Way', and has different lyrics. In its usual critical manner, music magazine "Sounds" looked for reasons "why the record is so mediocre", but had to admit that "the band's musical talents and the palpable enthusiasm actually are a good basis for a solid and catchy down-to-earth sound..." "Pop" magazine, on the other hand, liked all of the "eight melodious, catchy tunes…

The band plays together perfectly, and the production is without flaw. Kin Ping Meh undoubtedly will be celebrate another commercial success with this LP." That forecast was correct - the album paved the road to success over the coming years. Apart from the eight songs of the original release, this CD offers as bonus tracks the singles 'Everything's My Way'/'Woman' (1970, Polydor 2041126), 'Every Day'/'Alexandra' (1971, Polydor 2041172) plus the single A-side 'Too Many People' (1972, Polydor 2041247). The flip side of that single was the album version of 'My Dove' and can be found on the regular album. 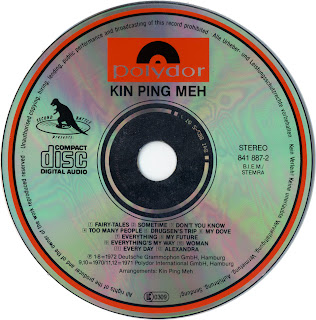