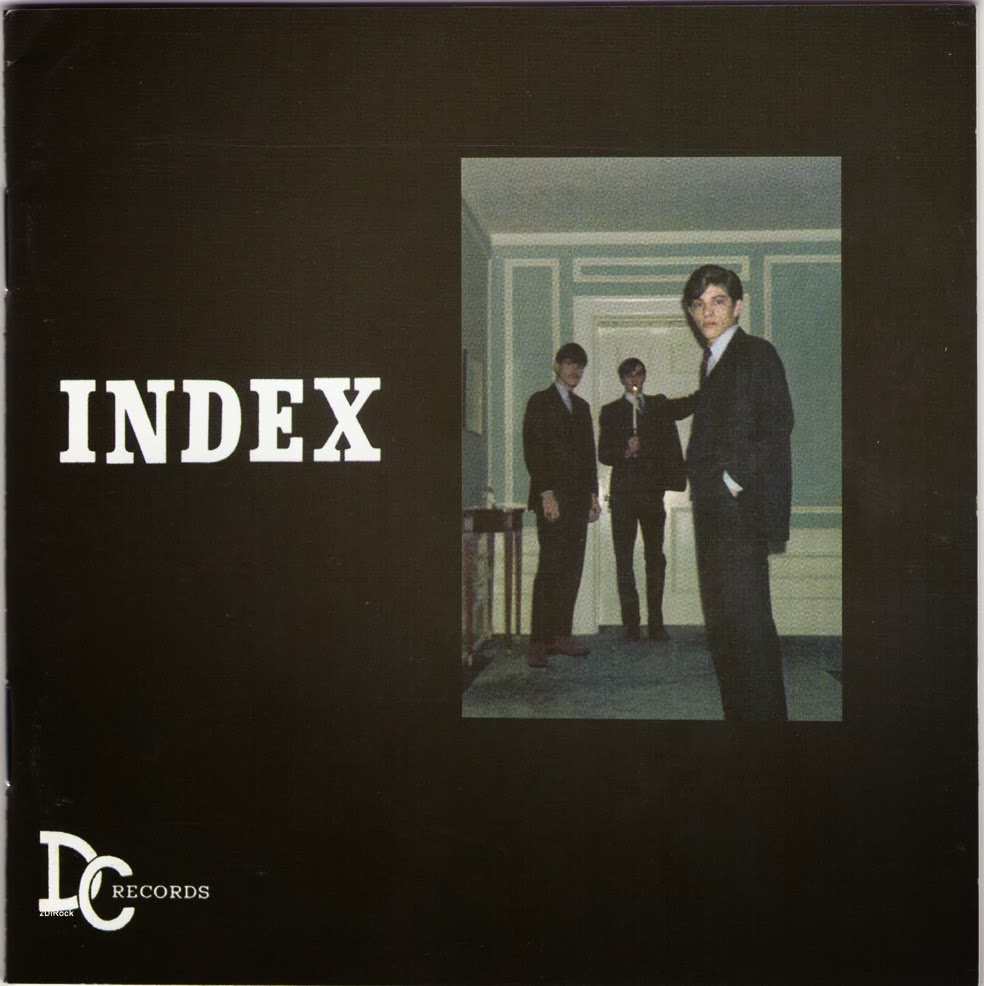 Index were formed in early 1966 in Grosse Point, Michigan. In ‘66 drummer Jim Valice (17 years old) met Gary Francis. Jim played in a garage band, and Gary played another band. One day they had a jam session with one more cool guitarist John B. Ford.  Their first jam was exciting, the sound was full and powerful with John’s technical guitar playing.

In early ’67 the band played “Johnny B. Good” and “Mustang Sally”. At the time Gary didn’t have his own bass. Jim and John bought a violin shaped bass for Gary as present. They became a party band, playing at a pool,and in the living room, in the summer. They covered Chuck Berry, Animals, and played their original songs. At the time the band was called “Chicken Every Sunday”. One afternoon after a session, they decided to change the name. John went over to a book shelf, and said taking a book” "Let’s make the name from what ever page falls open!"”. He tossed the book to the floor. The band changed their name to the Index. best of hideout

The Underdogs, The Rationals, unique girl band Pleasure Seekers(including Hideout clerk girl, Suzi Quatro) Fugitives(SRC) and more garage bands played at teenage nightclubs like Hideout and The Undercroft.
In the summer of ’67 Index was attracked to a new record, with unique, innovative sound, it was The Jimi Hendrex Experience. Hearing it they tried to make their own “psychedelic” sound. John wrote “Fire Eyes”, ”Shock Wave” and “Feedback”.

In the fall Jim got into The University of Detroit, John went to Yale in Connecticut. He came Detroit every other weekend to play with the band. Index was playing around Detroit area. During the Christmas holidays in ’67, Index opened for The Rationals.

Next morning the band tried their own recording. The basement became recording studio. Throughout December they had gigs in evening and rehearsed for first album during the day. After 3 days recording, they spent a couple of days mixing and adding sound effects to make feedback.

The album cover was basic black and white. On the cover was a picture of “Orpheus and Bacus” founders of a singing club John had joined at Yale. On the back was their picture. The record pressing company in Detroit needed a label and logo to press on the record, they selected DC from their friend Dwight Conger (aka. DC) for his great help with the band.

In mid ’68 John made the sound a more acoustic, mellow style. He began to listen The Buffalo Springfield, The Byrds, and Bee Gees. Gary switched to rhythm guitar.They found new bass player, Tom Ballow who was only 16 years old. He played soul music like James Brown, Wilson Pickett in his former band Joe’s Soul Repair.

By the summer of ‘68, John met young girl called Jan and fell in love with her. She hated the feedback sound and encouraged John to play mellow and tone down his music. This is one of the reasons why many people mixed up their first and second album.

The band’s sound changed. He wrote “Rainy Starless Nights” and “I Love You”. In the summer they made one more album called The Red Album which included John’s love songs along with wild “Breakout”, cover of Bee Gees “New York Mining Disaster”, Birds’ “Eight Miles High”. It was finished in the end of August, But the album was not pressed for a month because they didn’t have recent photo.  John was busy on the East Coast. Gary went to college in upstate Michigan and lost interest with the band.

After the recording they had their own house party at John’s home. His parents were traveling. It was early September. Detroit “punks” gathered there, The Underdogs, Scott Richard Case(SRC) ,Alice Cooper. Suzie Quatro arrived very late along with the drummer Nancy. About 10AM the next morning the house was trashed inside and out.

At the time John’s parent came back! Beer bottles had leaked a trail across the hall rug and now onto Mr. Ford’s foot. Everyone was immediately expelled from the house.

To release red album, Jim sketched silhouettes of the band members for the sleeve using the photo for theback cover of Black album. A local radio station WABX played the cuts from Black and the Red albums. But it was too late.  Gary left the band in January ’69.Tom quit too. It was the end of their history. In December  ’69 Jim and John joined again , they recorded some songs to make one more album . It was released as JUST US, only 150 copies were pressed.

In ’84 Voxx reissued the Red Album, the echo fuzz sound enchanted the listener. In late of ‘80s unknown Sears label released the Black Album. (it seems bootleg)  And at last, in ’95 Jim Valis released the CD called Index Anthology on his own label ,Top Jimmy Productions. It includes 5 cuts from Black Album, 7 cuts from Red album and 9 bonus songs of ’69 recording. In ’97, as a 30 year anniversary Anthology II was released as 2 CD which including ’69 live recording, rest of Black album and the last recording as Just Us.
60's Punk 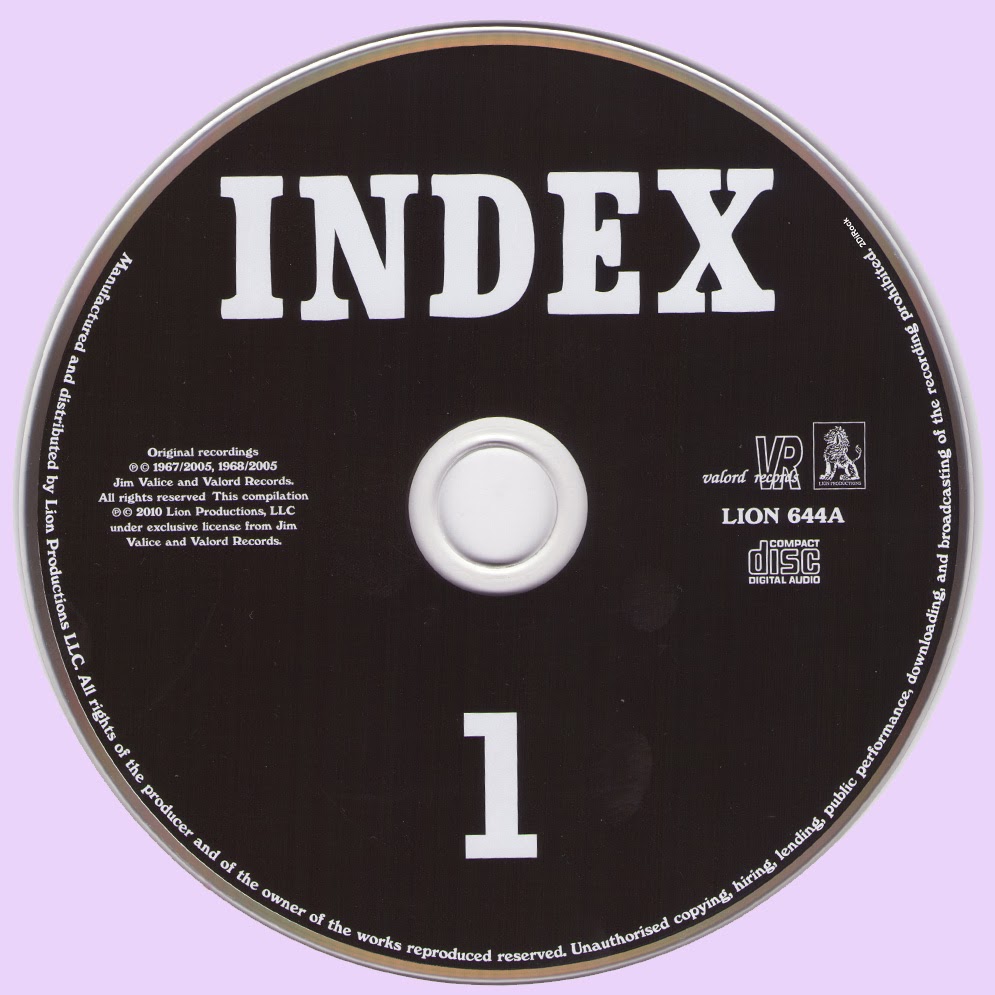 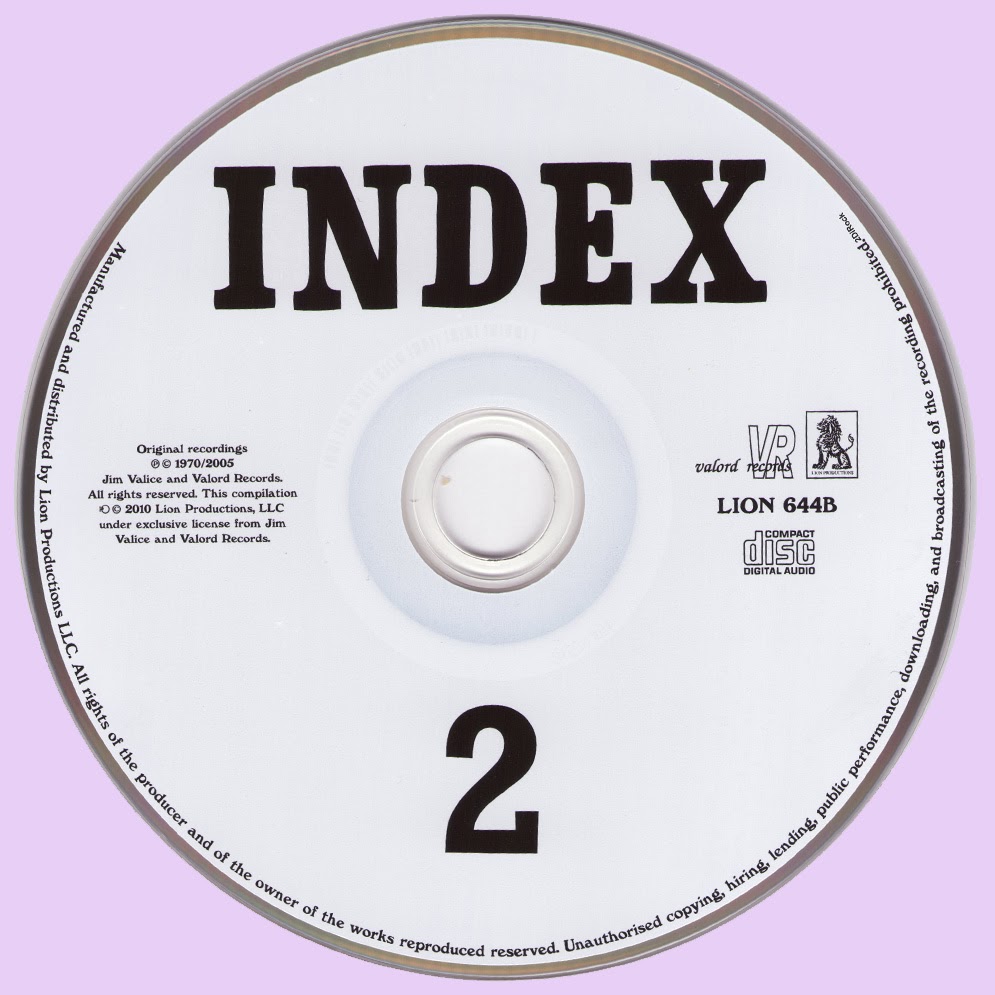