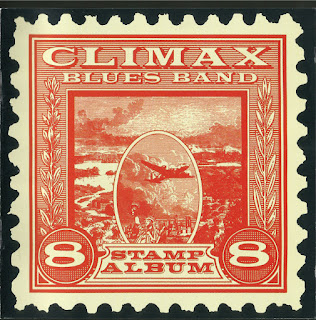 England's Climax Blues Band saw their first taste of mainstream acceptance with 1975's Stamp Album, a solid mix of blues rock, funk, and jazzy pop that paved the way for their eventual platinum success with Gold Plated a year later. Led by the stellar guitar work & vocals of Pete Haycock, the band was completed by Colin Cooper (sax, clarinet, flute, keyboards), Derek Holt (bass, vocals), Richard Jones (keyboards, bass, guitar, vocals), and John Cuffley (drums, vocals), in what is considered one of the strongest line-ups the band had.

Haycock's stinging guitar licks & Cooper's melodic sax drive the catchy, upbeat blues rocker "Using the Power", a great opener to Stamp Album that sets the stage for the rest of the record. "Mr. Goodtime" is a smoldering slice of bluesy, jazzy funk, littered with Jones' clavinet and Haycock's biting lead guitar, and the hook laden, rootsy "I Am Constant" was the albums hit single, a catchy rock number that will appeal to any fan of Little Feat or the Doobie Brothers. "Running Out of Time" is a pulsating funk rocker with a great vocal from Cooper and more delicious clavinet & guitar.

The band dives into melodic pop on the engaging "Sky High", a song I'm surprised the band didn't release as a hit single, and burst through with scorching Lynyrd Skynyrd styled southern rock on the nasty slide guitar attack of "Rusty Nail/The Devil Knows". Haycock really nails it with some searing slide on this gritty bluesy hard rock song, and the tune also features some wild Jethro Tull inspired flute from Cooper and Jones' great piano lines. Jones and his honky tonk piano & Cooper's soaring sax are all over "Loosen Up", and the closing instrumental "Cobra" sees the band combining rock, blues, and jazz-fusion styles for an exciting, yet brief ride.

As with most of Esoteric's CBB reissues, there are a wealth of bonus tracks here on Stamp Album. The BBC Radio One John Peel session tracks are especially enjoyable, and include songs from this album as well as the previous Sense of Direction release. "Before You Reach the Grave" is especially funky, and "Reaching Out" is given smoldering treatment, with Haycock & Cooper reaching deep with some ripping guitar & sax. The remaster treatment on the original album is crisp and clear, and the booklet contains a wealth of information about the sessions and plenty of photos. A splendid reissue of a great band from the always dependable folks at Cherry Red.
by Pete Pardo 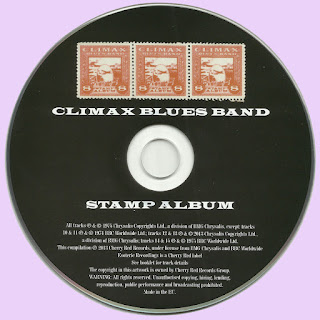 Free Text
Text Host
Posted by Marios at 7:40 AM 4 comments: