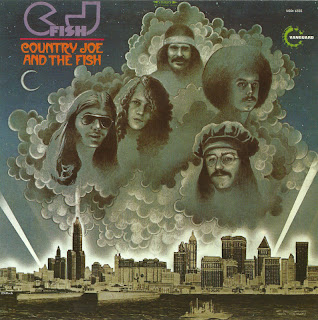 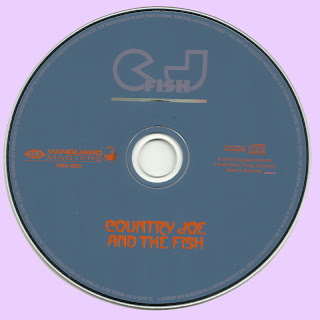 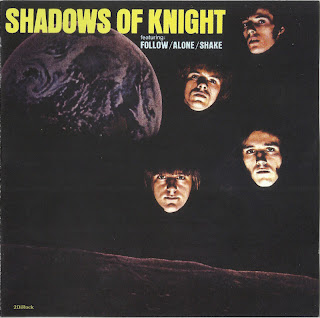 The Shadows Of Knight were formed in early 1965 in the Chicago suburb of Arlington Heights as The Shadows (completely unaware of Cliff and The Shads of course), by Jim Sohns together with rhythm guitarist Norm Gotcsh, lead guitarist Warren Rogers, bassist Wayne Pursell and drummer Tom Schiffour. Later in the year, Wayne Pursell departed to be replaced by Joe Kelley, who soon jumped over to lead guitar, and in December, guitarist Jerry McGeorge took the place of Norm Gotsch.

With their classic lineup complete, The Shadows Of Knight built up quite a following in Chicago and surrounding areas, and became the undisputed rulers of the super-hip Cellar Club. It was at a showcase at the Cellar Club that they impressed Bill Traut and George Badonsky of the fledgling Chicago label, Dunwich Records, with their rendition of garage staple "Gloria". Them's version of "Gloria" had been a radio hit in some markets, but was losing airplay in others due to it's perceived sleaziness.

Wasting no time, Traut and Badonsky got the band into the studio to cut their own version of'Gloria" and another song, the amazing "Dark Side". At the same time, the music business savvy Traut and Badonsky were well aware of Cliff and The Shads, and suggested a name change. Various suggestions were made, including The Tyme (which, I dunno, sounds rather early '80s to me!), all rejected by the band, who had built up a sizeable following as The Shadows and didn't want to confuse them with a name switch.

At last, on the eve of printing the labels for the all-important debut single, Jim Sohns suggested The Shadows Of Knight, which he thought had a kind of British sound to it - very useful in those British Invasion-dominated years - and would be lot less trouble adjusting to for their rabid fan following. In their recording of "Gloria", The Shadows Of Knight replaced the jazzy backbeats of the original with a simple kid-friendly dance beat. To be honest, I've never been a fan of either version... both Them and The Shadows Of Knight had better things to come! "Gloria" was released on the 31st of January 1966 and immediately began to get blanket airplay on local Chicago radio stations. Reaction was swift and the record reputedly sold over 100,000 copies in it's first ten days of release.

By the middle of April, the song had entered the Billboard Hot 100 where it climbed to number 10 within a couple of weeks. The Shadows Of Knight were now a hot commercial property and were quickly placed on the travelling hit roadshow of the time, Dick Clark's Caravan of Stars, touring the United States with The Outsiders, ? And The Mysterians and The Seeds. Wouldn't you just kill to have seen a bill like that? For the follow-up to "Gloria", the band chose a Bo Diddley song; "Oh Yeah", which also cracked the US Top 40, peaking at #39 in the Summer of 1966 and selling half a million copies. It was this song, in it's overdriven guitar glory, which introduced many a youngster to The Shadows Of Knight on the essential, original Nuggets compilation. Including me.

In November of that year, Dave "The Hawk" Wolinski, former bass/keyboard session ace, took over for Warren Rogers, who had been drafted. They then released "Bad Little Woman", a cover of a song by Them's fellow Belfast band. The Wheels, an adventurous choice which reached the upper levels of the Billboard Pop chart. Then the group reached their apotheosis; a tune called "I'm Gonna Make You Mine", a total garage monster, and one of my favourites ever... we used to put on this song at the start of play at every Creation Records recording session. It's just one of those tunes. Anyhow, it had allegedly sold 100,000 copies in the first two weeks of release, when it was unfortunately banned by most radio stations because the lyrics were deemed "too suggestive". The objectionable lines were apparently "I believe in me, that's how I live, I'm gonna take, girl, and you're... gonna give, yeah I'm gonna make you... mine". I think it may have been the telling pauses that did it.

Anyhow, after this crushing and stupid blow seemingly from Satan himself, the song stalled at #89 on the Billboard chart. For a comparable injustice anywhere you'd have to enter the sphere of international politics, to be honest. After the brilliant and horn-tastic "Someone Like Me" followed a similar undeserved road to chart oblivion scant months later, Traut and Badonsky then seemingly lost their minds, giving up the ghost with both The Shadows Of Knight And Dunwich Records, eventually apparently selling all the masters to their distributor, Atlantic Records, for the princely sum of $1... By the Spring of 1967, internal strife had begun to tear the group apart at the seams. Jerry McGeorge left, later to reappear in another Traut / Badonsky project, HP Lovecraft.

Within weeks, Kelley and Schiffour had split too, going back to their roots with the Joe Kelley Blues Band, while "The Hawk" wound up with Bangor Flying Circus. At this low point, (and let's face it, you can't get much lower! I Jim Sohns pulled together an entirely new lineup, and looked hard for the next step...

The new version of "Back Door Man" is a growling, lascivious tour de force of biker rock menace which makes for a vital link with The Shadows Of Knight's garage past and is a darn good listen to boot! People buying the album might have been disappointed to find that the version of "Shake!" on the album was not the rather wonderful single, but a cursory one, sounding like a demo. Included both versions here, as well as the other fabulous single sides. So there we have it, the lost chapter in the Shadows Of Knight story, put before you at last by Rev- Ola... does it get any better?
by Joe Foster, Glasgow January 2009 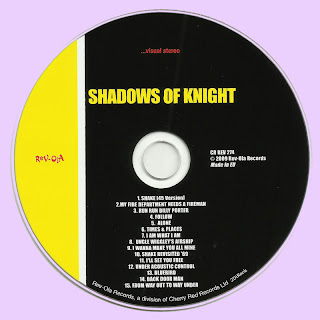