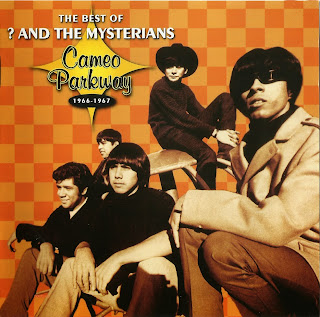 Like so many rock 'n' roll classics -"Satisfaction," "Layla," "Whole Lotta Love," "Purple Haze," "Johnny B. Goode"- ? and the Mysterians' 1966 smasheroo "96 Tears" begins with a riff that drills into your cranium and, once implanted, never, ever leaves. And why would you want it to? It's the perfect riff for the perfect three-minute, badass lock 'n' roll song.

But "96 Tears" isn't like those other riff-o-matics. For starters, the guitar sits this one out; this tadically radiant riff is dispensed via that most soulful of seemingly long-lost instruments, the venerable organ. And that opening burst of austere insanity- a staccato sputter of eighth notes, all two of them tepeated ad infinitum- is only the beginning. No sooner has it stunned you into instantaneous acceptance of its immortality than it morphs into another unbearably mind-numbing riff of equal enormity. The song could end right there and you'd die happier for having heard it.

Nope, he's tough, defiant; he's got himself together now—he's not so much singing as sneering He may be down but soon things will be different: "And when the sun comes up/I'll be on top/You'll be way down there/Lookin' up." Is that a threat or a mere prediction? No matter; she's gonna be the one bawling before this is all over, you just watch and see: "Ninety-six tears, c'mon and lemme hear you cry, now/Ninety-six rears (whoo!)/I wanna hear you cry/Night and day, yeah, all night long."

What is this? Who is this? "96 Tears"? What an odd name for a song, you're thinking. And the gtoup singing it is called—huh?—? and the Mysterians ? The singer is a punctuation mark ? You've gotta be kidding me. Is he a strange visitor from another planet or somethin' ? Well, since you asked...  The man who calls himself?, you see, was born on Mars. He's been around since the dinosaurs and regularly has conversations with The People From The Future. He's been famous for several lifetimes and his band, he once said, "came together out of the clear blue sky."

Not buying it? Try this earthly version then: He may or may not have been born Rudy Martinez circa 1945, in Texas. And he probably did his growing up in the Saginaw, Michigan area where the band -most of them transplanted Chicano Texans- really formed.

There are two sides to every story, after all. But ? -and yes, that's his legal name- ain't giving anything away. That's part of the mystique, like the perma-shades that blot out the King of Attitude's eyes. If he told you more about himself, he wouldn't be much of a question mark, now, would he?

So we'll be the designated bean-spillers. The nucleus of the original band –bassist Larry Borjas, drummer Robert Martinez and guitarist Bobby Balderrama- took up rockin' circa 1962. Keyboard player Frank Rodriguez was soon added and before long the band was cranking out tunes by the Ventures and the like.

They named themselves after a 1957 Japanese sci-fi movie in which alien Mysterians from the planet Mysteroid land on Earth looking to mate with our women. That's where ? comes in. Around '64, he just appeared, a dancing, snarling enigma, declaring himself the Mysterians' new vocalist and suggesting that the others take names like X, Y and Z to maintain their inscrutability (they passed on the offer). By then Robert (spies swear he's ?'s brother) and Larry had found new lives in the military, replaced by Eddie Serrato (?'s brother-in-law) on drums and Frank Lugo on bass.

The now-solid lineup cut a couple of records that went nowhere. Then came "96 Tears," which began its ascension to garage band eminence one day when Rodriguez began noodling on his keyboard. (And get this, trivia fans: Contrary to long-standing assumptions, Frank played the omnipotent riff on a Thomas organ, not a Farfisa, as is so often assumed.) ? once told this writer how the song materialized from the depths of his subconscious: "As soon as Frank hit the first chord, I said, 'We can't use that because I've heard it before.' We were all trying to figure out where we'd heard it. Then I realized that I wrote the song a long time ago." ? had called his composition, which he'd penned as much as four years earlier, "Too Many Teardrops."

Guitarist Bobby Balderrama picks up the story: "? started singing it, and then Eddie said, 'We should give it a number, like how many teardrops?' He said, 'Let's call it "69 Tears.'" I was only 15 at the time, but I knew what that meant. So he said, 'Let's turn the numbers around.' And so we went with that." In March of 1966, ? and the Mysterians shuffled into a makeshift studio in Bay City, Michigan, and cut "96 Tears" and its B-side, "Midnight Hour." The band's manager, Lilly Gonzales, issued approximately 750 copies on her own Pa-Go-Go Records label, and ? himself began promoting it, calling radio stations and visiting record shops all over Michigan.

After several months the single had stirred enough local buzz that Cameo-Parkway Records, a label that had logged dozens of hits by the likes of Bobby Rydell, Dee Dee Sharp and Chubby Checker earlier in the '60s, picked up the distribution, re-releasing the single on its Cameo imprint. (? claims he went with Cameo because the label was orange, his favorite color. More probably, Neil Bogart, then vice president of the company, cut a deal with Gonzales.)

Long story short: By the end of October, the quintet had laid claim to the number one single in America. Not to mention a bona fide rock 'n' roll anthem that forever raised the bar for rock 'n' roll anthems. "96 Tears" marked the last major hit for Cameo Parkway, certainly its last chart topper. It's also the only song that most people associate with ? and the Mysterians.

But that wasn't all, folks, and now, finally, all of the group's amazing slabs of pure teenage Tex-Mex bliss can be found in one place. What you've got here are 27 pristine examples of unadorned, unadulterated dementia: the entire contents of the two albums ? and the Mysterians spewed out for Cameo, 96 Tears and Action, the non-LP single "Do Something To Me'V'Love Me Baby (Cherry July)," and two previously unreleased tracks, an early, slower and bluesier take of "96 Tears" and an outtake of "Midnight Hour"—both in glamorous stereo!

? and the Mysterians did manage to place another three singles on the charts in '66-'67. "I Need Somebody," which led off that debut album and now christens our collection, made it to number 22 in Billboard. It's another cocky garageland masterwork, inexplicably inserted "Mary Had A Little Lamb" funky organ lick and all. "We weren't too far from Motown," says Balderrama of the song, "and I think we were trying to get that funky style."

Following the opener, the group immediately struts its versatility, rolling through a set of incessantly hyper tunes like the boss "8 Teen" (no relation to the later Alice Cooper hit), "You're Telling Me Lies" and "Why Me" (with Tony Orlando singing background!). We're talking classic lusty, R&B-driven snot-nosed punk all the way here, yet there's an undetlying tenderness in ?'s vocals, belying his crusty demeanor.  He's that kinda guy.

By the time the Mysterians recorded their second album, rock had grown fuzzier - heavier, as they said back then. ? was in the vanguard, as amply demonstrated in "Girl (You Captivate Me)," the early '67 single that hinted at a proto-Detroit rock sound that would shortly be taken to extremes by the likes of the Stooges and the MC5. There's more upfront bass; louder, more depraved guitar;  ?'s vocal is chewier- things are getting more mind-blowing by the minute. "Can't Get Enough Of You, Baby," which preceded "Girl" by a few months, was virtually a "96 Tears" clone, although  ?'s vocals swim in a sea of reverb.

There are nods to the soul and pop sounds of the day. "Got To" borrows a page from the Otis Redding soul book, while the band's cover of the Isley Brothers' "Shout" rivals any of the hundreds of other versions recorded back then. "Do Something To Me" borders on bubblegum and preceded Tommy James' hit version by a year. ? and the Mysterians didn't hold on for long. Cameo-Parkway soon scaled back operations and although the band recorded for other labels in various guises, by 1968 they were through. Some of the musicians stayed active through the years but it wasn't until the late 1990s that the original members of? and the Mysterians returned to conquer the world for a second time, making new recordings and performing killer live shows.

The lucky ones who witnessed them reported that the band was every bit as nutso as it was in '66. It was, they said, enough to make a believer cry -cry, cry, cry. Whoo!- 96 tears.
by Jeff Tamarkin, 2005 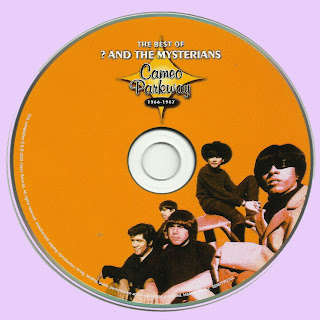