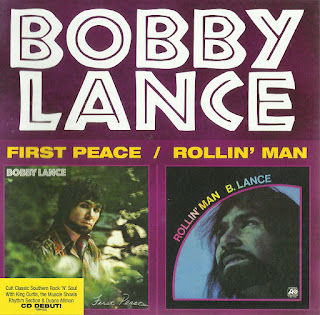 Check the liner notes of an album by an artist that doesn’t primarily write their own material, and the credits will be teeming with the names of the people responsible for penning the songs. Sometimes these names will be familiar: fellow performers, star producers, or the rare songwriter or writing team that has earned enough hits to be well-known in their own right. Much of the time, however, the names will be more obscure, listing writers who may have worked steadily for years turning out album tracks and B-sides, or recording with minor artists rather than stars. If they’re very lucky, they might even manage to punctuate their career with a hit or two.

Such is the case of Bobby Lance, a Brooklyn native who started writing songs with his older sister Fran Robins (17 years his senior) while still a teenager in the late ’50s. Most of their material was doled out to little-known doo-wop and girl group outfits, but the duo scored big when Aretha Franklin took their song “The House That Jack Built” to the Top 10 on both the pop and R&B charts in 1968. The hit granted Lance the opportunity to record two albums for Atlantic Records, 1971’s First Peace (released on the Cotillion imprint) and 1972’s Rollin’ Man, both now compiled onto a single disc and released on CD for the first time by Real Gone Music.

Lance’s debut, 1971’s First Peace, was made with the full backing of the Atlantic machine, featuring a lineup of musicians familiar to anyone who’s studied the liner notes of the label’s classic soul albums of the era. The Swampers, house band for Muscle Shoals Sound Studios, serves as Lance’s core group, while legendary saxophonist King Curtis leads the horn section, and the gospel group the Sweet Inspirations provides the backing vocals. Lance, for his part, leads with a gutsy, Southern-inflected voice of surprising range and intensity, well-suited for the soulful ballads and bluesy rockers comprising the album.

“More Than Enough Rain” is by far the best-known song on either of Lance’s LPs, due to the rumor that Duane Allman plays slide guitar on the track. (Bill Kopp’s liner notes for this reissue presents it as fact, but it’s apparently still a source of debate for avid Allman Brothers fans.) The six-minute psych-blues rocker is a bit of an outlier, however. More typical of First Peace is opening track “Somebody Tell Me,” a mid-tempo R&B groover that mixes blues boilerplate (“My mama had me on a block of wood / in an old broken-down shack”) with vaguely hippie sentiments (“everybody helps each other, yeah”).

First Peace sometimes feels weighed down with Lance’s insistence on piling on the dramatics and “soulful” signifiers, but it’s also packed with enough gems to demonstrate why he managed to be in demand by not one, but two of the most important record labels of the era. (See below.) The underwritten melody line and tired “I’m a man, you can’t hold me down” lyrics of “Somewhere in Between” are more than made up for by its thundering, desperate chorus, which singlehandedly propels the song to the top of the pack. “One Turn You’re In One Turn You’re Out” and “Trouble is a Sometimes Thing” are radio-friendly ballads that could have been R&B hits (though perhaps in cover versions), while the moody atmosphere and tense arrangement of “Shake Down Blues” lends the song a directness largely lacking from rest of the album.

First Peace met with little success. At some point before its release, Lance had also managed to sign a songwriting contract with Motown Records. The legal wrangling between the two labels resulted in a decision that they would split the profits of Lance’s albums, and Atlantic had little interest in promoting a record in which it had only a limited financial stake. Rollin’ Man, released the following year, is far more stripped down, probably due to budgetary restrictions. Gone are the strings and horns, the Sweet Inspirations backing vocals, and Robins as his writing partner. Instead, Lance wrote all the tracks — nine on this album, shrunk down from the 11 on First Peace — and recorded them in New York with a four-piece rock band he had recruited on his own. Even the cover of his second album knocked a few superfluous letters from his name, billing him only as “B. Lance.”

Despite the cutbacks — or, more likely, because of them — the lean Rollin’ Man is the superior album, tamping down the previous album’s florid blue-eyed soulisms and focusing on a tighter rock groove. Lusty opener “Bar Room Sally” introduces Lance in a less self-serious mood; during the coda, he even provides the voice of “Sally” and kissy noises against a clattering, saloon-style piano. For all its goofiness, though, “Bar Room Sally” also sets the template for the level of songcraft throughout the album. Unlike First Peace, where even many of the stronger tracks seemed either underwritten or overly busy, epic rockers like “Something Unfinished” and “John the Rollin’ Man” are packed with hooks, but lean enough to keep them sharp and let them sink in.

Lance’s taste for grandeur hadn’t abated entirely, however, as testified by the lengthy instrumental solos on the eight-and-a-half-minute-long “Hot Wood and Coal,” and the expansive, Neil Diamondesque pop balladry of “Last Stop Change Hands” and “She Made Me a Man.” Yet the limitations of the recording process seem to have inspired Lance. While First Peace at times sounded like a songwriter’s demo tape — a song for Aretha, followed by a song for Clarence Carter — Rollin’ Man is fully committed to Lance’s personal blend of influences and interests. Ever the professional songwriter, however, there’s nothing on the album so personal or idiosyncratic that it couldn’t be covered by a band like Three Dog Night or Grand Funk Railroad. The one exception is album closer “Tribute to a Woman,” a delicate, relatively elliptical hymn that barely runs over a minute, yet contains more genuine feeling than First Peace‘s ode to ladykind, “Walkin’ on a Highway.”

Despite the fact that Lance found his groove, however, Rollin’ Man would prove to be his final album; like its predecessor, it foundered. Lance briefly continued to work as a songwriter for Atlantic, but the trouble he had caused for the label ensured his contract wasn’t renewed when it expired. The man who had worked in the music business since he was a teenager suddenly found himself locked out of the industry. Unlike many of his songwriting peers, however, Lance was lucky enough to leave behind a recorded legacy of his own. First Peace and Rollin’ Man aren’t perfect albums, but Lance’s talent shines throughout. Had he had as much of a head for legal matters and business as for songwriting and performing, it’s possible these albums wouldn’t be just cult curiosities, but the start of a fascinating career.
by Sally O'Rourke 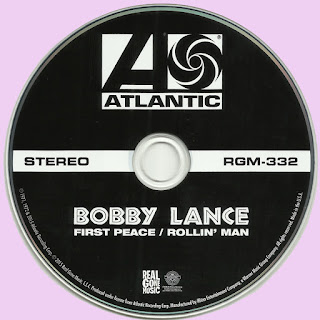