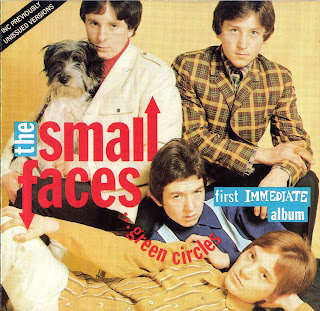 In August 1965 a group called The Small Faces released their first hit single. In August 1965 a record company called Immediate released their first hit single. During the next four years both The Small Faces and Immediate were rarely out of the charts, releasing a whole spectrum of highly individual music and achieving near legendary status, and like all good legends they both died young, but the energy and excitement that was generated during those few years left a legacy that is still making itself felt today.

The Small Faces were formed in London's East End when Ronnie Lane, guitarist with local group "The Pioneers", met Steve Marriott, a former child actor and leader of "The Moments" in an East Ham music shop where Marriott worked on Saturday's. Lane was there to buy a bass, having decided with the lack of local bass players he'd have a better chance of work if he switched instruments; a shared admiration for soul music and records by such acts as The Miracles, Bobby Bland and Booker T. resulted in them joining forces. Marriott gave up playing piano in favour of Lane's Gretsch guitar, they enlisted Pioneer's drummer Kenny Jones and organist Jimmy Winston.

Their name was derived from their diminutive size and the archetypal mod word "Face". Their first record was a blatant steal from Solomon Burke's "Everybody Needs Somebody To Love", and it was a hit. Ironically, because "Whatch Gonna Do About It" used feedback to disguise Marriott's recently acquired skill as a guitarist and because they looked like Mods, they were accused of jumping on the bandwagon which was proving so successful for The Who, but unlike The Who, a West London group who merely dressed like Mods and were obsessed with the lifestyle, with The Small Faces there was no image making, they were Mods.

Jimmy Winston didn't last long in the line-up, he was neither small nor a particularly good organist and as soon as the group met Ian McLagen they felt they'd really arrived, he already looked like them and as an added bonus - he could reallv play. For the next eighteen months they gigged constantly, whether on their own or part of a package tour their schedule was gruelling and endless, their short set grew as venue managers wanted them off stage before the hysterical audience completely wrecked the place.

There was little incentive to play well as the people they were playing for were making as much noise as the band and they only wanted to hear the hits anyway. During this time they released five top ten singles and were given a couple of days off to record an album, a project not considered too important by Decca, who thought of them as a singles act.

Exhausted, frustrated and faced with the possibility that they were destined to become just another teenybopper group, churning out hit singles until the next trend appeared, it was hardly surprising that early in 1967 their admiration for Rolling Stones's manager Andrew Loog Oldham led them to his Immediate label. He was only signing artists who had the talent to succeed the dedication to survive and the ability to progress, he saw all the necessary qualities in the Small Faces and offered them the time and freedom to realize and develop their full potential.

For the first time in their career the pressure was off, live performances were kept to a minimum - confirmation of laryngitis etc., (necessary for gig cancellations) was readily available from the Harley Street doctor immortalized by The Beatles in "Doctor Roberts" - leaving them free to write and record at a comparatively leisurely pace, and with the assistance of engineer Glyn Johns at Olympic Studios in Barnes they produced their first Immediate album "Small Faces" Their early songwriting efforts had displayed their skill for ripping off old R 'n' B numbers or speeding up hymns and injecting enough energy to make them sound like their own, now they began to add a combination of cockney humour and originality to become one of the few groups to bridge the gap between pop and rock.

The use of catch phrases and local jargon blended with a more textured musical approach introduced a string of tracks that were to establish a new and distinctive sound for the group, they experimented with instrumentation, adding brass, woodwind, shouts and party noises as well as applying new recording techniques. The result was an LP that began their transformation from being a live band that got screamed at, to becoming a band that deserved to be heard, The Beatles had already proved that by largely abandoning live work for recording it was possible to make enormous musical progress without losing popularity.

They didn't want to release any of the album tracks as singles although a couple would have been obvious choices, instead Marriott and Lawe produced a version of "My Way of Giving" for Chris Farlowe, giving him his fourth Top Fifty hit. Another song from the LP "(Tell Me) Have You Ever Seen Me" was recorded with a local group "Apostolic Intervention", and although not a particularly successful collaboration it did introduce Steve Marriott to drummer Jerry Shirley who was eventually invited to join Humble Pie.

Two years after the release of this album Steve Marriott left the group to form Humble Pie with ex-herd guitard Peter Frampton, bassist Greg Ridley from Spooky Tooth and Jerry Shirley. The remaining members left stranded without a guitarist or vocalist eventually teamed up with Rod Stewart and Ronnie Wood to become The Faces and continued the flamboyant style and carefree stance that began with the Small Faces. Both groups were to enjoy enormous popularity, particularly in the States where until the early seventies they had been virtually ignored.

The inclusion of the alternate takes on this album is due to the archive searching of Sequel, neither The Small Faces or Immediate remember what lots of them were or where they came from. Some tracks were given new titles twice nightly, others were titled by a tape operator anxious to keep the record and records straight, told by The Small Faces as they exited the studio at dawn, totally wrecked to "Call It Something Nice Like Collibosher Or Piccanniny", a few titles stuck, some where lost and some have been found....
by Ken Mewis, 1990 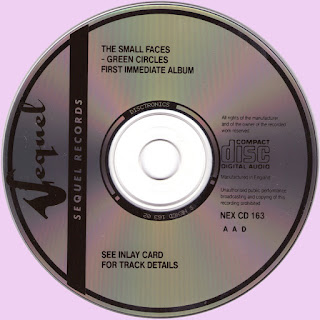 Free Text
Just Paste
Posted by Marios at 5:21 AM 11 comments: