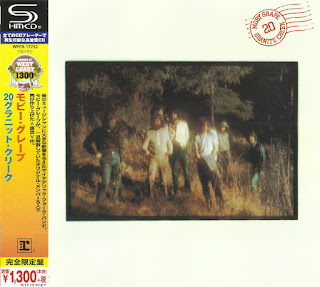 20 Granite Creek was another comeback disc that Moby Grape issued in 1971, and delivers the goods in a more subdued, laidback country-rock fashion.
The five original members who played on the 1967 debut are all present though Skip Spence only contributes one fascinating original, the instrumental Chinese Song. Chinese Song is incredible, completely unlike anything the Grape would record again and more proof of Skip Spence’s genius. While Spence provided the Grape with an undefinable magic, Mosley, Lewis, Stevenson, and Miller’s contributions were just as important and really an underrated facet.
My first initial reaction to 20 Granite Creek was disappointment. The record’s production reminds me of the Doors’ LA Woman, slicker than their 60s records, making the band sound like a ghost of its former self. That being said, 20 Granite Creek is a much better album than their unfocused 1969 lp, Truly Fine Citizen, which was more or less contractual filler. Each track has something new to offer and as a whole this is one of Moby Grape’s very best offerings. Songs like Gypsy Wedding and Wild Oats Moan show off the group’s loose, bluesy hard rock side and would fit in well with classic rock radio as both these songs are full of great guitar riffs and busy arrangements. Goin Down To Texas is another excellent driving roots rocker with some great guitar hooks and a vibe that’s similar to Fall On You or Omaha. Other surprising highlights are the moody oblique psychedelia of Horse Out In The Rain and the boogie rocker I’m The Kinda Man, That Baby You Can – which bears a passing similarity to prime era Little Feat.
My picks off the album are Apocalypse and About Time, two reflective gems off the first side of the original lp. Apocalypse is more of a country-rocker that comes on like the calm after a storm and highlighted by fiddle and a rock steady beat. About Time is a complex production and notable for its unique tin drum section which gives it a distinct island influence. All in all this is a great guitar oriented roots rock lp that shows Moby Grape trying different ideas in the studio while keeping things fresh and simple. The original lp is fairly easy to find and was reissued on cd (but now out of print) by San Fransisco Sound in the 90’s albeit with shitty cover art though.
by Jason Nardelli 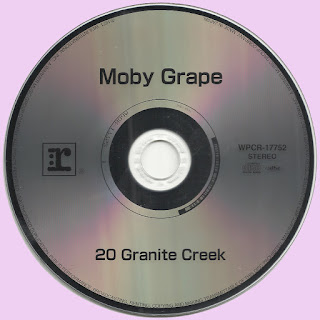