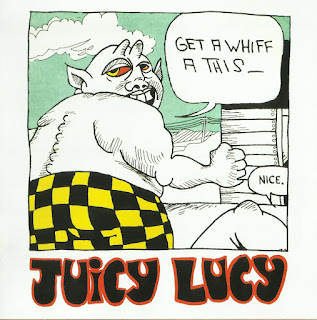 For an impressionable teenager still in my final year at school, Juicy Lucy's version of Who Do You Love was a welcome injection of energetic blues-rock when it entered the U.K. singles chart. This was the dawning of the '70s however and for me the more adventurous sounds of King Crimson, Yes and Gentle Giant beckoned with my hard-rock cravings satisfied by the likes of Deep Purple and Uriah Heep. Juicy Lucy in the meantime followed the success of the single and their 1969 self-titled debut album with Lie Back And Enjoy It (1970), Get A Whiff A This (1971) and Pieces (1972).

By the time they came to record the third album, Get A Whiff A This, the band was all but unrecognisable from the one that had impressed the 15 year-old schoolboy less than two years earlier. Chris Mercer (saxophone, piano, organ) and Glenn Campbell (steel guitar) remained but along the way Paul Williams (vocals), Micky Moody (guitar), Rod Coombes (drums) and Jim Leverton (bass) had come on-board. Whilst these names may not carry the same weight now, back in the early '70s this was a formidable line-up by anyone's standards.

Singer Williams had a hand in most of the song-writing with a couple of cover versions thrown in to make up the numbers. Of these, it's Mr. Skin by American band Spirit that opens the album in fine style. With strong dynamics, this psychedelic proto-prog workout features a catchy introductory riff similar to Jan Ackerman's stumbling guitar bridge from Focus' Sylvia which this predates by a year. Juicy Lucy's version of The Allman Brothers' county-rock standard Midnight Rider on the other hand benefits from Williams' soulful vocal and Leverton's pumping bass line.

Of the original songs, the R&B rocker Midnight Sun stands out thanks to a gutsy vocal and Coombes' intelligent drumming. The song's structure (if not the riff) is reminiscent of Deep Purple's Smoke On The Water which again did not appear until the following year. After this encouraging start however Juicy Lucy begin to run out of steam. Despite some superb guitar and bass interplay and another sold riff, Harvest is nothing to write home about whilst Mr. A. Jones is the first of three laidback country-rock tunes. With its pedal steel and acoustic guitar sound (in the style of The Faces) Mr. A. Jones sits comfortably alongside Sunday Morning with its Dr. Hook flavoured vocal and restrained guitar picking.

Whilst not as successful as its predecessors, sales for Get A Whiff A This were not unreasonable but it failed to consolidate the band. Following its release Campbell, Mercer, Coombes and Leverton all bailed out leaving Williams and Moody to soldier on. After one more album they too called it a day although the band did eventually resurface in 1995.
by Mark Hughes 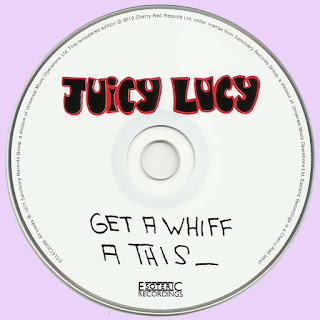 Free Text
the Free Text
Posted by Marios at 6:36 AM 6 comments: