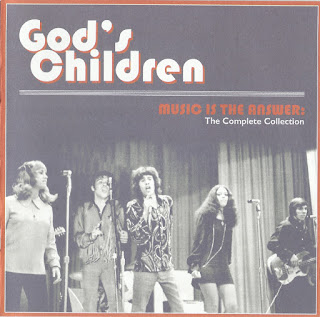 The memories are rich, often as sun-splashed as one might expect, and I wish I had more of them. Seeing Santana at a Day on the Green in 1976, War at Winterland around the same time, Malo in the mix there somewhere as well. Growing up – and into a music obsessive – in late 60’s/early 70’s suburban California meant hearing the legacy of Latino rock’n’roll develop before my very ears, and regardless of my relatively cloistered existence in then-predominantly white East Bay outpost Concord, I’m convinced that being exposed to that ethnic strata helped both seed my imminent escape to the urban wilds of San Francisco and smooth the transition. I only know now, with the release of this long overdue collection, that my incidental education would have been all that much richer had it included seeing God’s Children, preferably prior to MCA subsidiary Uni getting their corporate claws in.
Now, on the surface, that stipulation is an odd one considering said interference involved landing the burgeoning hotshot band – whose pedigree, in the persons of Little Willie G (Garcia) and Lil’ Ray (Jimenez), reached back to genre pioneers Thee Midniters – in the studio with the legendary Wrecking Crew. But as the separation of tracks on Music Is The Answer makes lucently clear, even Carol Kaye and company, in this instance anyway, can’t help but be the applicators of some slickly competent lipstick on the pig of big label intentions. Yes, ruinous industry intrusion (especially back then) is a tale so common as to be the rule not the exception, but, listening to the evidence here, the dispiriting effect of that meddling, so often cited, could hardly be more accurately applied than in this case.
The verve, the vivacity, the inner soul/rock naturalism reflected on the collection’s first eight tracks, recorded, with one exception, with an outfit of local musicians simply referred to as the East LA Band, speaks in that type of single dynamic voice that was one of the era’s most enduring signal traits. In Garcia and Jimenez God’s Children had a pop-savvy duo with the chops and experience to not only compose their own Chicano soul classics but the confidence to pull them off on any hold-their-own stage you’d care to imagine, while in Lydia Amescua they had a spark plug vocal foil that could bring a combined light and fire to her roles as backing and lead singer (check her head-turning out-front performance on Lil’ Ray’s “If You Ever Go Away,” a pure force of intuitive phrasing at the mic). For an all-too-brief moment, the world was theirs, surely.
“It Don’t Make No Difference,” the harmonies divine, percolates along on a riverbed of B-3 organ and a rhythm section brimming like a very finely tuned V-8, the piano-based ballad “I Just Wish” situates somewhere between Frankie Lymon and Carole King, “Brown Baby” could very well be the tune that drew Berry Gordy west to LA, the yearning romanticism of “Lonely Lullaby” poignant enough to soundtrack every lover’s warm night dream of Southern California no matter where they live. And lest it be thought that God’s Children simply couldn’t deal with a larger studio contingent, skip to “Hey, Does Somebody Care.” Recorded at a session with a 40-piece orchestra booked by local entrepreneur Eddie Davis, the band nailed the track on a single take, at which point every hired musician stood and applauded as the conductor Arthur Freeman, in disbelief, said “I’ve never seen anything like this.”
A make-or-break opportunity, it would ultimately do both. Davis played some insider cards and the track became the theme song for Ben Casey star Vince Edwards’ new series Matt Lincoln. Though the show didn’t last past one season, the placement of their triumphant slice of symphonic soul brought God’s Children to the attention of Uni and the quiet tragedy of unforeseen consequences was set in motion. While the vocals on those Wrecking Crew sessions tend to retain their native zest (Lydia’s especially), the backdrops in to which they are plugged feel generic and paint-by-number, rendering what had been innately vital rather anodyne and bloodless. A waste of talent on multiple levels, it nonetheless cannot diminish God’s Children’s moment in the sun. A blink-and-you-miss-it ascendancy it may have been but, in retrospect, due to the talent and drive and dedication the trio brought to the project, what that short-lived burst produced was enough to maintain one’s faith in the concept of timelessness. [find Music Is
by Dave Cantrell 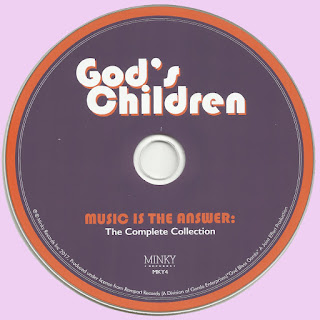