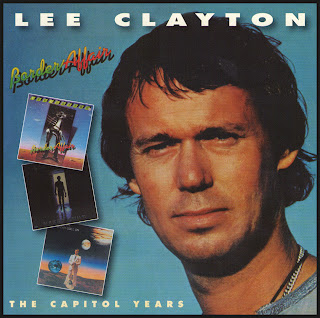 Introducing an artist such as Clayton is an excuse for the lazy sleeve note writer to trot out such hackneyed adjectives as 'enigmatic', or 'obscure', but not 'million-selling'. In a recording career that spans over thirty years, his album output doesn't even run into double figures, so one epithet that cannot be used in conjunction with Clayton's name is 'prolific'.

However, I'll take qualify over quantity any day, and if Clayton needs to take his time over albums as consistently strong as the three contained here - Border Affair, Naked Chid and The Dream Goes On, well, so be it. So, here's the point at which I shade in a bit of the Clayton background detail for yet.

According to the few music encyclopaedia entries on him, he was born in Alabama on October 29th, 1942, and was raised in Oak Ridge, Tennessee from the age of four. He told the UK fanzine Omaha Rainbow that "I've always known that music was important - when my dad knew he'd got uptight, and the world got too much for him, he would break out his bourbon and play Red Foley and Jimmie Rodgers records, and tell war stories and drink whisky.

I can remember trying to figure out what was going on; why everybody would sit there and get drunk and cry. I figured anything that could evoke that kind of emotion had to be pretty strong." Clayton's father was keen for him to learn a musical instrument, and gave him the choice of accordion or Guitar. He choose the latter of course, but it appears that his father purchased a steel guitar (maybe even a dobro) and also arranged for young Lee to have lessons. After a couple of years, Clayton expressed the opinion tha he preferred learning the instrument by ear, as opposed the formal lessons, his father promptly sold the guitar.

He didn't return to music until his teens. Music remaind one of numbered interests that he maintained during his student days at the University of Tennessee, wherein he eventually earned a Bachelor of Science degree in Industrial Managment, after which he got a job. He was doing ok, but in the mid '60's he was married had a Porsche sports car, and yet feld strangely unfulfilled. As well as music, he yearned to fly aeroplanes and despite being married, had the ol "roving eye" when it comes to the ladies.

According to Clayton "one day something went click and i turned around and went back home, quit the job and started trying to get in to the Air Force. He was to spend three years in USAF getting the pilot to March 2nd McDonnell BF101 Voodoo Fighter, which was most known amongst fly boys as "The Widowmaker", owing to a design fault that led to it behave unpredictably during certain manoeuvres.

In fact that experience inspired the song "Old Number NIne" from his album Border Affair. Having crossed off the desire to fly from his "to do" , on quitting the force, Clayton decamped to Nashville with the aim of pursuing a career of singer-songwritter. During his period with the services, Clayton has honed his skills as singer-songwritter, working on his Guitar playing and lyrical skills. There was clearly more than a grain of talent there, but in Nashville he was one of the zillion aspirant singer-songwriters trying to shine up the greasy pole.

" I was living in Luisville Kentucky, and spend three or four days of week in Nashville... people would say to me -what are you doing? - I'd say I'm a poet and songwriter. With in six months my money started to go and they took my credit cards away from me and I was on the street. Sols my Porsche and I had and old beat-up VW. I went from then until I got some money from the record company when i signed the deal in early '73. Before that was out on the street , sleeping in the floor time".

The record company referred to hear is MCA, who signed Clayton in 1973, following the succes he had enjoyed when Wylon Jennings had covered his song "Ladies Love the Outlaws". Clayton's excellent self-titled debut album is also available and is well worth checking out. However, Clayton spoked with somewhat mixed feelings of the year 1973 and released his debut long player. "The start of '73 I had no money, got some money made a record, spend a lot of money, end of '73, broke off the label, back on the streets again, all in one year.

I lived in motel room in California most of '74 - out in the Mojave Desert and lived there with this woman. Didn't do a whole lot, the truth is, just sat around and looked at things. Watched a whole lot of sun downs and sunrises, thought a lot, climbed the mountain, and one day figured it was time for me to go at it again". A considerable factor in the re-energising of Clayton's muse was his meeting and befriending Philip Donnelly, a fine Irish guitar player who was then a part of Donovan's touring band. In Donnelly, Clayton found an incisive and inspired guitarist, who helped supply a razor-sharp cutting edge to Clayton's recordings, lifting the music out of the Nashville standard, into something slightly more rock-orientated and contemporary.

This was Outlaw country, I guess. Clayton landed a new record deal with EMI / Capitol, and cut the three albums that you're hopefully enjoying. Border Affair was released in 1978, and enjoyed positive critical notices, and Willie Nelson loved the track If You Can Touch Her At All enough to cover the track himself. Cashbox magazine nominated Clayton for New Male Vocalist of the year. It's follow-up, Naked Child had a more difficult gestation - Clayton had crises of confidence over the production sound and the way recordings were progressing - however, he hauled it together, and its release in May 1979 again saw it well-received, critically.

Although Clayton had made little impression sales-wise in his native USA, the album did sell well in continental Europe, and Clayton, with an impressive band, toured the continent supporting label mates Roger McGuinn, Gene Clark and Chris Hillman. His European fan base has proved loyal; Clayton still enjoys a reputation on the Continent, years after the release of his final Capitol album, The Dream Goes On.

Lee Clayton has only intermittently returned to the recording and gigging fray in the twenty odd years since the early 80's; Bono of U2 has claimed Clayton as an influence, bizarrely enough, but Clayton's story is ultimately one of potential largely unfulfilled. Mind you, if one book-ends his debut with the three albums contained here, you have a quartet of some fine Outlaw Country music that no self-respecting fan should be without
by Alan Robinson, November 2007 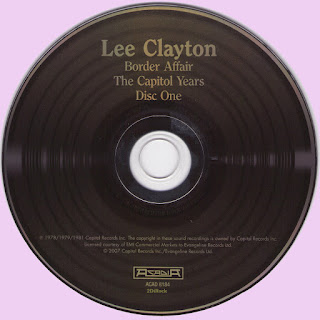 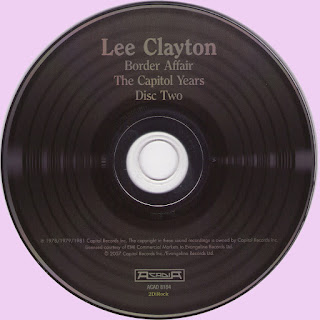 Free Text
Text Host
Posted by Marios at 9:28 AM 14 comments: