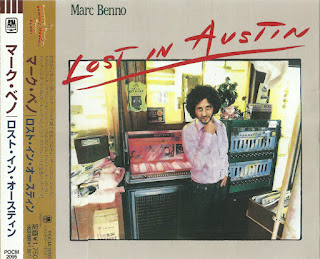 From the first gut-wrenching guitar licks to a spicy south of the border ode, Marc Benno's "Lost In Austin" is full of funk, vibrant vocals and breathtaking instrumentation. It's perfectly produced by Glyn Johns, showcasing Benno's banner writing talent (he wrote or co-wrote all of the songs except Bobby Darin's "Splish Splash"), his soft infectious vocal style and some outstanding instrumental work.

Tha album star Benno on guitar and piano, Alber Lee and Eric Clapton on guitar (placing that instrument out of the relm of critism), Dick Sims keyboards, Carl Radle bass, Jim Keltner drums and Dick Morresey Sax. Recorded in two weeks in London and mastered in Hollywood, the album provides a geographic montage, since Benno spent a decade of wandering, mainly in California before moving back to Texas.

"Hotfoot Blues" is a kickoff number with enough slapback guitar and turned on percussion to challenge a heady brew of r 'n' b Muddy Waters style. The guitars sound as though they were stolen from King Kong's closet and are being attacked with pick axes. But it works providing a mighty mean sound that paves the way for Benno's vovcal and the finale.

It's followed by a catchy number "Chasing Rainbows". Again the guitar shine, only now they're muted into a subtly romantinc mood as they're mellowed by strings. Heavy percussion and bluesy organ power "Me And A Friend Of Mine". The highlight of the album -and title song- "Lost In Austin" is a beguiling number with it's autobiographical overtones has Benno bemoaning. "I hope words don't hex us/Down in Austin Texas?Lord I'm lost in Austin again/One town I thought I'd never/Be lost in, that was Austin/And then I was lost in/Austin again".

The soul romp is reminiscent of the brilliant peaks Bob Dylan reached in his "Blood On The Tracks" album. Damn good is Benno at his best. "Monterrey Pan" is another Dylanesque effort, sharp stabs of guitar, impeccably rendered, shape this bouncy ballad. Organ electric guitar and Benno's voice colot "The Drifter", then the album ends with "Hey There Senorita". Close your eyes and Dylan is bleeding on the tracks again. But the comparsion is unfair, Benno is not Dylan, and vice versa.
by Gerry Wood 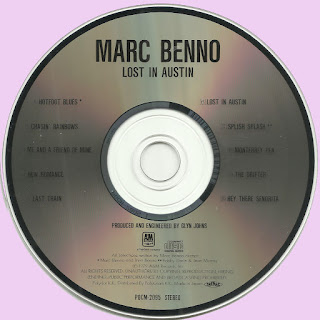 Free Text
the Free Text
Posted by Marios at 8:57 AM 8 comments: