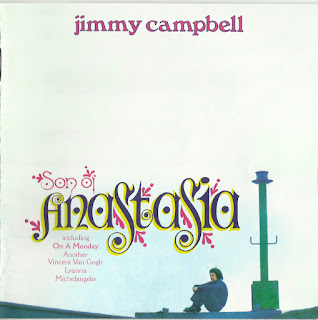 Jimmy Campbell was born on January 4th, 1944, three years after the Liverpool Blitz, to William and Anastasia Campbell. Only very essential rebuilding had occurred and Liverpool had still not been restored back to normal living conditions. England's vital port city was consumed by the war effort transporting munitions and American soldiers for the invasion of Europe. It is hard to imagine that out of such devastation would arise some of the most creative popular music performers and composers the world has ever known and one that deserves to be known. Jimmy, like most boys teenage boys in Liverpool during this period, became immersed in Eddie Cochran, Little Richard, Elvis, Buddy Holly and Everly Brothers records.

On March 11th, 1961 he would go to see The Beatles play a farewell dance at Aintree Institute and his life would be changed forever. "They were God," recalled Jimmy later. After that event, he began playing guitar like his idols and putting a band together (the Tuxedos) with his mates from Brookfield Comprehensive School in Kirkby. The Tuxedos changed their name to the Pulsating Panthers in 1962 and supported The Beatles at Hambleton Hall in Huyton on January 13th. Soon the Panthers would be playing the famous Cavern and in March of 1964 Cavern compere Bob Wooler would unintentionally change their name to The Kirkbys after the area in Liverpool where most of the band members resided.

The Kirkbys would go on to tour Germany and Finland. A 1964 tour of Finland found the band supporting Herman's Hermits, playing live on Finnish TV and releasing their first single, penned by Jimmy, 'Don't You Want Me No More' b/w 'Bless You' for RCA Finland. The Kirkbys' sole UK single, 'It's a Crime' b/w 'I've Never Been So Much in Love', would be released in 1966 before the band would change their name to the more psychedelic 23rd Turn Off and release the single 'Michelangelo' b/w 'Leave Me Here' for Deram in 1967.

After the 23rd Turn Off fizzled out at the end of 1967, Jimmy would continue to write his very personal songs while working as a toolmaker in a factory to help earn money. Jimmy was very much influenced at this time in his life by musicians Tim Hardin, Bob Dylan, Lennon and McCartney, The Band, and master painters Michelangelo and Van Gogh.

Meanwhile, Merseys' bassist Billy Kinsley had developed a deep friendship with Campbell when the 23rd Turn Off supported the Merseys on a UK Who tour. Billy would spend time at Campbell's flat listening to all of the amazing songs that Jimmy had composed.  Although the two Merseys' singles failed to attract much attention, Fontana A&R man Dick Leahy was a confirmed believer in Campbell's songwriting abilities and managed to sign him to a three album recording contract with Phillips.

A Fontana press release from 1969 describes Campbell as: "A 1969 song-writer minstrel like King Richard the Lionheart's Blondel." A Scouse Jack Kerouac beat who, "Rides in trains, boats, planes and hitches rides on giant lorries and jumps into the back of vans to get to his next destination." Campbell did enjoy the beat lifestyle and he often kipped on London benches out of the enjoyment of the experience and not out of need.

A 25-year-old Jimmy was rushed into the Phillips studio complex at Stanhope Place and Bayswater Road in London during the summer of 1968 to record enough material to complete two albums, Jimmy never possessed the self confidence as a solo artist and he would have preferred bringing a band to back him  during the sessions. Leahy felt differently and envisioned Campbell as a singer/songwriter like Cat Stevens. Jimmy's nervousness shows on all of the Son ofAnastasia recordings and he described his own voice, years later, as sounding "weedy" on all of the recordings.

Most of the songs were run ' through in just one or two live takes with Jimmy on a borrowed acoustic guitar from Billy Kinsley and his kazoo. So naive was Jimmy about the recording process that he actually backed away from the microphone on the autobiographical 'Tremendous Commercial Potential' when he wastold that they would be doing a 'fade' to end the song!

Jimmy did manage a trip back into the studio in late 1969 to record 'Frankie Joe' with a backing band consisting of Billy Kinsley on bass and Dave Harrison on drums for the B-side of the delayed second single 'Lyanna'. However, by the time 'Lvanna' was released on February 12th 1970, the Fontana publicity machine had already spent its dime promoting Son ofAnastasia. Interesting enough, Jimmy's manager, Hal Carter, had been successful in promoting Jimmy's songs around to other artists.

In 1970, Sgt. Will Scruffham (aka Don Charles) would release covers of 'And They All Came Marching Home' and 'Salvation Army Citadel' (which Jimmy recorded during the Son of Anastasia sessions and would later be released by Campbell himself on his final album, Jimmy Campbell's Album.  Rolf Harris also covered 'Salvation Army Citadel' in the same year. Jimmy would only hnd out about the cover version when he happened to see Harris performing the song on BBC TV!

By the end of the 1969, Campbell was in need of additional money and took a job replacing a pre-Badfinger Joey Molland in the Merseybeats. While on tour, Jimmy spent time composing songs for his 1970 follow up album Half Baked, but then that's another story.
by Mark A. Johnston, Dayton, OH 2009 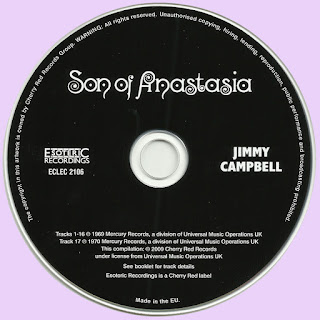