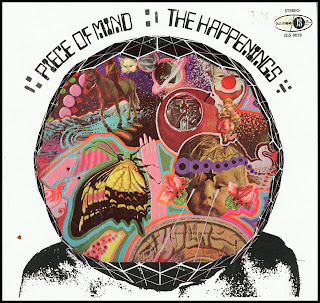 1969's self-produced "Piece of Mind" is simply unlike anything else in their catalog.  Like many of their contemporaries (The Four Seasons and The Tokens readily come to mind), this album was apparently a last ditch effort to modernize the group's sound in the hopes of expanding their rapidly dwindling audience.

Anyone who knew these guys for hits such as 'See You In September' and 'Go Away Little Girl' would be amazed to hear original material such as 'Heartbeat', 'Living In Darkness' and 'Be My Brother' .  With bassist Dave Libert and guitarist Bob Miranda responsible for the majority of the twelve tracks, the band turned in surprisingly impressive slices of lite-psych and conventional rock.

An impressive blend of their patented harmony vocals and some interesting studio effects, the set's high points were probably the rocking 'Don't You Think It's Time' and the six minute plus 'Imagine'.  In addition to an interesting song structure the latter even sported a cool Eastern-flavored Bernie LaPorta guitar solo.

One more song like that and the LP would've warranted four stars. Besides, ever imagine you'd hear these guys singing a song entitled 'Where Do I Go / Be In (Hare Krishna)'?  Mind you, old habits die hard and it was probably too much to expect the group to totally abandon their old ways.  'Cold Water', 'New Day Comin'' and the country-flavored 'Piece of Mind' were sufficiently schmaltzy to appeal to their older fans - provided the other stuff hadn't killed them.  The bizarre but way cool cover art was almost worth an additional half star.
Bad-cat 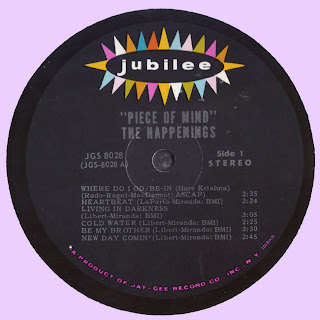 Free Text
Text Bin
Posted by Marios at 6:00 AM 7 comments: