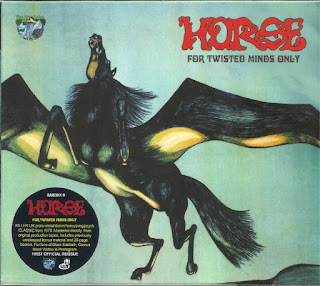 Horse was formed in South London during the late sixties. They created occult influenced progressive hard rock that was ahead of its time. Guitarist Rod Roach had briefly played in an incarnation of British psych-rock legends Andromeda before forming Horse with other key member, vocalist Adrian Hawkins. Alongside bassist Colin Standring, the band also featured legendary drummer Ric Parnell, later of Atomic Rooster (amongst many others) and future star of This is Spinal Tap (aka Mick Shrimpton)! The obscure rockers have been a favorite among collectors for many years. For Twisted Minds Only is an album long overdue for an official reissue.

Recorded in 1969, originally released in 1970 and bootlegged countless times from scratchy vinyl transfers, Rise Above Relics is now finally presenting this detailed release mastered and cut directly from the original master tapes. Featuring a treasure trove of previously unheard/unreleased material, For Twisted Minds Only is certain to have connoisseurs and collectors of the period frothing at the bit. This long classic gallops out of the gate with the psychedelic “The Sacrifice” that could feel at home on a Jefferson Airplane album from the era. With its bloody chorus and the equally creepy second track “See The People Creeping Round” we can see how this Horse might be an acquired taste.
by Rich and Laura Lynch 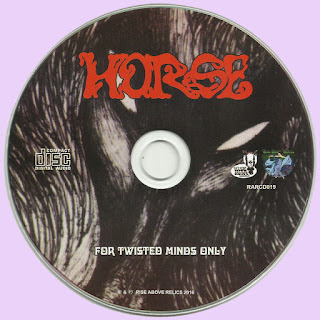 Free Text
Text Host
Posted by Marios at 7:14 AM 9 comments: