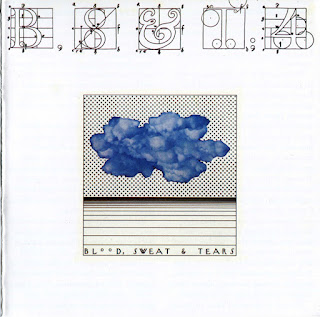 When Ed Sullivan welcomed Blood, Sweat and Tears to his show a while back he asked them where they got the unusual name from. From Churchill, they replied. Well, since the Kinks did Arthur, everybody knows Churchill isn't worth very much anymore, so as a result the name has been immeasurably weakened. So maybe they ought to shorten it (names of groups are too long nowadays) to just Tears. After all it's the Tears that have always been their most vital component. There really hasn't been that much in the way of sweat except maybe from the spotlights getting too hot. And the only blood has been from the deep scratches Janis inflicted on David ClaytonThomas' back when that pair hooked up once upon a time. So it's Tears and it fits. After all they've always been best at sad ballads and this album is no exception.

And Steve Katz has a lot to do with it, having written two real pretty little things, called "Valentine's Day" and "For My Lady." The first of them is sort of vaguely reminiscent of something with a similar title that Tim Buckley did around four years ago. Which isn't peculiar, since Steve did that Buckley thing "Morning Glory" on the first BS&T album three years ago. Well, his Valentine item is just as pretty as anything by Tim and "For My Lady" is prettier still. It's as pretty as a peach, it's even what some people might call shit-pretty. That's how pretty it is. Lovely in fact. And Fred Lipsius does this even lovelier instrumental thing on both sides called "A Look to My Heart" which sounds like Monk's "Ruby My Dear" and sounds even more like Coltrane's "Naima." Or anything by Bill Evans. You know: concrete timeless breathless prettiness as an excuse for beauty.

Which certainly is a good formula. Like if jazz titans can indulge in it, why not jazz non-titans like BS&T? It's no disgrace to balladize exclusively, maybe they ought to give it a try. It's what they do best, isn't it? When they try to rock with David wailing and flailing it comes off like Paul McCartney doing same. Conviction is abandoned in the attempt to get down, get with it, teach your dog to swim. And conviction is something that actually seems to be on the agenda when they're doing the soft stuff and ever since Elvis did "I Want You, I Need You, I Love You," it's been a well-known fact that ballads need not be worthless. And need not be non-rock either so there's no threat to their masculinity or anything like that.

Anyway, ballads may even be vehicles for the conveyance of meaning. Like on that Indian song by David called "Cowboys and Indians." It's an Indian song rather than cowboys, and it's poignant and yet there's no blood like in Soldier Blue or Little Big Man so it avoids heavy polarities in making its point. Kids'll be quoting it in English classes and maybe even social studies. Richie Havens could even have a decent size hit with it and then it would take on really relevant racial significance.

So you can play the soft touching stuff and then for a change slip the needle over to "Lisa, Listen to Me." It's like a breath of fresh Airplane, circa "We Can Be Together." Steve really pulls off a mind-boggier of a riff on his ax and the vocal that follows doesn't even ruin it. Put the ballads and it together and you've got yourself the best – B-(e)-S-(&)-T – Blood, Sweat & Tears album since the first.

And come to think of it, David's guitar playing on "Go Down Gamblin'" is better than Jagger's guitar playing on Sticky Fingers. And "For My Lady" is a lot like George Harrison's "Something," so I wonder what Joe Cocker would have to say about it.
by Richard Meltzer, Rolling Stone, Aug 5, 1971 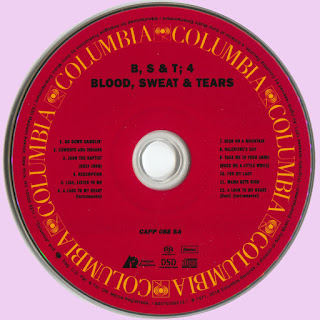