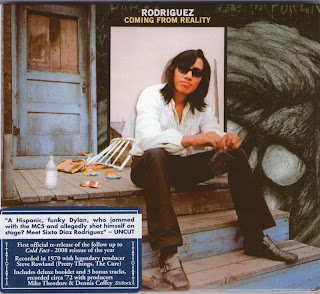 Quite a change from Rodriguez's first album Cold Fact. On Cold Fact Rodriguez sang bitter, disillusioned songs about slums, drug abuse and broken love affairs. Something in between the two albums obviously changed his point of view because Coming From Reality consists mainly of love songs. And not the cynical odes to past affairs of Cold Fact - these ones are full-blown.

And even the social comment songs on the album seem less bitter and more resigned. The strings have been laid on with a heavy hand, on some tracks providing the only backing to Rodriguez's guitar and voice. But the voice shines through and the clever poetry on some tracks is as incisive as ever. Song to song we explore a great talent musician and have the chance -even almost four decades later-  to discover his bright music.
by Roger Crosthwaite 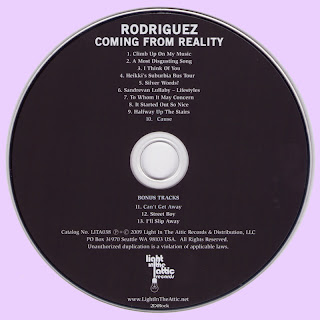 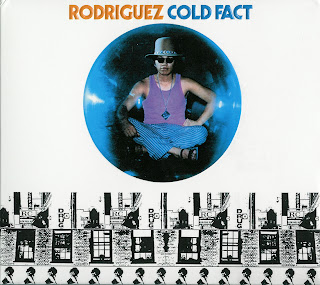 Dipped sweetly in the psychedelia of the sixties, this the first album from a mysteriously unknown artist, mingles simply folk guitar with astonishing lyrics about drugs, depression and inner city blues. Rodriguez’s distinct nasal voice ambles through a dozen simple tunes addressing the turbulent backdrop of America in the sixties and does so with such impressionable beauty that it has catapulted him into cult status in many far flung corners of the globe. Such is the demand, that both Cold Fact, and the second album Coming From Reality (re-released in 1976, in South Africa only, as After The Fact), have now been remastered on CD format, some 20 years later.

For many, this album is one magnificent trip, lost in the haze of hippiness, and indeed the album is laced with narcotic references, but as far as talent goes, Cold Fact is a remarkable album perfect for idealists and dreamers. The obsessive I wonder, perhaps the best known of the album’s tracks, is a simple tune that mirrors the type of questions you’ve always wanted to ask of certain people and never had the courage, but it is the album’s ultra-trippy opening number, Sugar Man which really lends the album and air of intrigue. Others such as Crucify Your Mind, Jane S. Piddy and Forget It are both poignant and subtly beautiful.

However, it is the album as a whole, it’s poetic lyrics and the bohemian fueled mystery surrounding it that makes it so appealing to several generations, even years after the artist signed off with the words thanks for your time, then you can thank me for mine and after that’s said, forget it.

This album, in short, eventually becomes part of your lifestyle.
by Andrew Bond 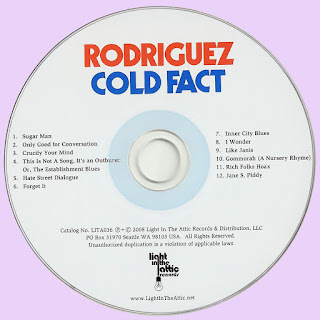 Free Text
the Free Text
Posted by Marios at 3:15 AM 41 comments: