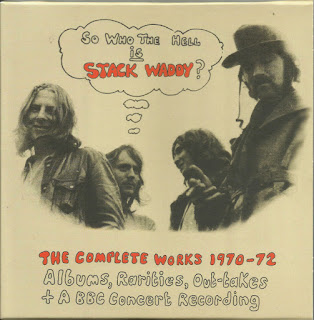 The complete Dandelion recordings of Peel favourites Stackwaddy, featuring their two albums Stackwaddy and Bugger Off, plus a bonus disc entitled Hunt The Stag that includes outtakes and a live BBC session from 1971….Ian Canty hears the primal rumble of the band that were pretty much Proto-everything……

Who the hell were Stack Waddy? Well they were a bunch hard drinking, rough, tough men from the home of Frank Sidebottom, Timperley Manchester, driven to get on stage as sozzled as possible and create complete and utter chaos! They were John Peel favourites, so much so that he signed them to his Dandelion Records imprint when no-one else would touch them, mainly because they had alienated every interested record company with their outrageous behaviour. All this was whilst the Fall were at school/toddlers/hadn’t been born yet (delete where applicable).

A legendary band that had a Punk attitude years before Punk itself, eruditely described as “the link between the Pink Fairies and Dr Feelgood”, which feels just about right. Unlike most bands of the time Stack Waddy espoused short, sharp and brutal R & B attacks the likes of which had only been seen before in the work of 60s hoodlums like the Pretty Things, Downliners Sect and the more unhinged of the US garage combos.

Coming together at the end of the 60s with the merging of a couple of local Hard Rock/Blues outfits, they featured incomparable John Knail on vocals (reportedly at the time on the run from all manner of folk, including the Old Bill), Stuart Barnham on bass, guitarist Mick Stott and with Steve Revell bringing up the rear on drums (replaced on the second LP by John Groom). The pivotal encounter with Peel came after the band’s performance at the Buxton Blues Festival. Though having a little in common with the heavy underground bands in trendy London, Stack Waddy more wished for a return to the fast, immediate power of a decade previous rather than protest.

To this end they initially drew on the very Rhythm and Blues that had influenced the Stones and the Beatles way back in the 60s. They also infused their performances with aggression, typically wry Manc humour and lots and lots and lots of booze. The band discovered Beefheart through Peel and on realising that Knail’s vocals were similar to the Captain’s, they became one of the very few bands to cover the Magic Band’s material pre-Punk.

After penning a deal with Peel’s Dandelion Records (and suitably impressing their American Warner Brothers overlords at a label showcase by drinking vast quantities of alcohol before arriving on stage worse for wear. This lead to John Knail urinated on the dais, leading to a mass exit of said bigwigs), they set about recording their first record, a single pairing Elias McDaniels’ Roadrunner and their own composition Kentucky. Though that didn’t make much of an impact an LP was called for and the self-titled platter duly arrived in February 1971.

Curiously playing against type on this first album, the guitar here is pretty restrained, more of a ghostly treble atop thudding drums which dominate while the bass picks out the melody. I don’t know if this was by accident or design, but it really works well and marks the record out from the offerings of many “heavy” bands of the time. What a raw shock it must have been for any mellow Hippies encountering this loud, joyfully alive and irresponsible power pack!

As is alluded to in the sleeve notes, in the Proggy times this record was released into, doing cover versions was actively sneered at (even if your own material was arrant rubbish). This did not bother Stack Waddy one bit – their relish in taking things back (or forward, given a modern perspective) to simpler, more hard hitting times meant they attacked these 60s staples for all they were worth, regardless of any trend for virtuosos etc.

So Stack Waddy the album commenced with a high energy take of Roadrunner (also recorded by the Pretty Things, whose hell-for-leather attitude I’m guessing was a big influence on the Waddy), effectively setting out their stall early on. Though there are more covers (they even stomp all over Jethro Tull’s Love Song), their own material was not without merit. Mothballs is a great piece of raw and tense Punk Blues and Kentucky is not far away from what Wilko and Co would come up with in Canvey Island a few years down the line.

On the good Captain’s Sure ‘Nuff Yes I Do Knail’s vocals really do sound like Van Vilet’s and even on Bo Diddley’s Bring It To Jerome they bear a resemblance. The band for their part grind out a tough, Funky backing on this one and on Mystic Eyes they really take off on the old Them stormer. It showed the Garage that was in their genes effectively and in fact a recut of this one (which is included on disc 3) was considered for the a-side of a prospective single.

Despite its crude but powerful quality, the LP did not sell well. Nevertheless Peel was keen to get a follow up in the can and, after failing initially (see below), they eventually managed to cut that second platter. Even so Barham notes that they never really caught the magic of Stack Waddy, due to them “making it up as they went along” in the studio. Still it was a good try.

Bugger Off, the second Stack Waddy album, has one of my favourite album covers ever. It sums up the early 70s and the uncompromising image that the band had to a T, a view of the drummer frozen in mid-flight, just about to unleash a lethal assault on his kit. Overseeing this is a lairy and hairy looking singer leaning back with the mike stand a la Joey Ramone and just peering out from the murk, a lank haired guitar-toting confederate. This perfect representation of Stack Waddy is followed up fittingly by a no-holds barred, super-heavy version of the Pretty Things classic Rosalyn, a textbook example of Thug Rock. The guitar is far more brutal and simple on this second LP, only occasionally settling back in the manner of the first and here it works marvellously.

Though again the album is perhaps a bit too heavy on covers, they’re all imbued with the undeniable Waddy stomp, plus always displaying their in-built irreverence. Their own Meat Pies ‘Ave Come But The Band’s Not Here Yet, based on a remark overheard at club gig, shows their ready wit. The Beefheart link was stressed again with the cover of the Zappa collaboration Willie The Pimp and their tough as (k)nails version of the Kinks You Really Got Me predated the Hammersmith Gorillas similar effort, matching it in the “too damn early” Proto-Punk stakes. It is a shock hearing them try the old Astrud Gilberto/Stan Getz chestnut The Girl From Ipanema, but of course after a gentle start it hurtles downhill in a most in-PC way.

Shortly after Bugger Off was issued the band split up, having not made much headway in the era of Supergroups and Prog Rock (but they did make a rollicking noise). Since that times there have been various reunions along the way, with one of the most recent being in 2007 and poor quality bootlegs which didn’t portray the band half as well as on the BBC live recording featured here.

Hunt The Stag brings together all the tracks previously issued as extras on the Cherry Red 2007 editions of Stack Waddy and Bugger Off. So no new material if you own both of those already. This breaks down into the tracks demoed for the second album, but were ultimately not used (deemed “too slick” by Peel and his sidekick Clive Selwood), a BBC In Concert session from 1971 and the Dandelion compilation item Mama Keep Your Big Mouth Shut (yet another one the Pretty Things had tackled as well) . Housed in a great mini-sleeve with Waddy in full live flow, it doesn’t disappoint in comparison to the albums proper.

The live selection gives you a good idea what the band were all about in concert – thunderous, jokey and beer-soaked and this offering unsurprisingly comes with a heartfelt Peel intro and outro. The bizarrely named Jack & Jill Meet Blind Pugh On The Spot is a highlight, part Blues Jam before splitting into a speedy bit of Proto-Punk Rock (it’s possible they were two songs melded together).

Of the studio material, the title track is a nice piece of heavy-handed Psych/Punk/Blues and Here Comes The Glimmer Man has real atmosphere, restrained power – it really is great, building from a quiet long run into mayhem. The compilation album track Mama Keep Your Big Mouth Shut is ferocious (it also features in the live set) and the punchy old Mod number Leavin’ Here is given an energetic re-boot, years before Motorhead did a similar job. Along with an even better version of Mystic Eyes it suggests Peel and his cohorts misjudged in junking this session, but it’s all here for you to enjoy now.

Though it would have been nice to see the 1972 Peel session included, this new slim pack boxset has some great sleeve notes from Nigel Cross with telling and humourous contributions from band founder Stuart Barnham. Whilst there isn’t anything in the way of new material unearthed here, it is good to have the albums each on their own individual disc, as they were originally heard. Stack Waddy were unheralded at the time but their  which played a part in paving the way for Dr Feelgood and even the Pistols. They are well worth hearing again.
by Ian Canty 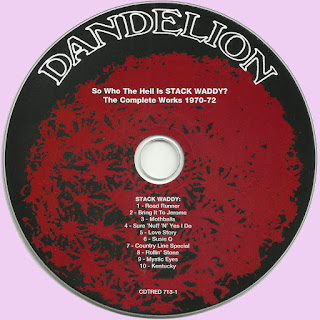 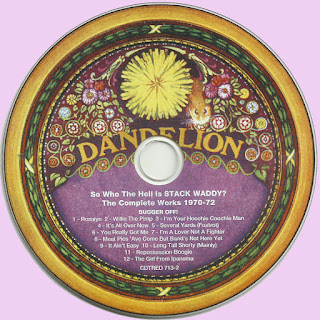 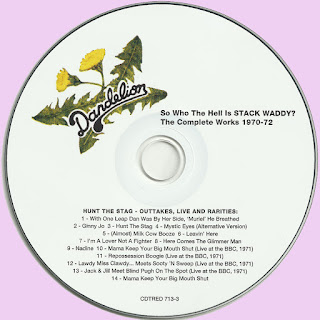 Free Text
Text Host
Posted by Marios at 8:14 AM 5 comments: