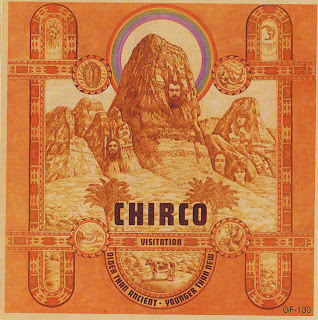 Previous to the Chirco Visitation sessions, the Visitation Musicians were working in Westchester County, just outside of Mew York City, as a band called "Sassafrass". with S.H, Foote on Keyboards, Ted McKenzie on drums Bruce Taylor on Bass and John Naylor on guitar, Tony Chirco approached the band to assist in completing a project he had already begun with other session musicians . "Sassafrass" joined with 'Tony and vocalist Anvil Roth and completed the sessions at Syncron Sound Studios.

The band then traveled to Denver In an attempt to promote the LP within the local Donver music scene, By chance they became entangled with J, Carlos Schidlowski, a, Chilean businessman who started his Denver Colorado, based "Crested Butte" records in 1972, Chirco was the first Ip release on Crested Butte, the second (and only other one) was a very Middle-Of-The-Road effort by Paul Hampton. The group and label were introduced at big party on a ranch near Boulder and Ips were handed out with "Crested Butte" belt buckles.

A few singles followed by local acts but Schidlowski's label basically was doomed to start with….and perhaps that's what Carlos may have had in mind, since some seemed to believe he was better at spending the money of others than taking in revenue for the label, The Chirco sessions were produced by the now-famous Michaei Cuscuna and have a polish that few independent Projects of the early seventies have, Barry Tashian {Remains} assisted the group when they ware taping in New England, A disc of all original material, "Visitation" is a rock Ip with a jazz feel and subtle spiritual message that did not find a commercial audience In Colorado.

The group and album met with failure in the Denver area (although we heard they played in Boulder) and most of the records ended up in the trash or in the case of one shop, wore given away with a purchase., The financial slight of hand of the label's founder, however, did not escape the federal authorities and they pursued Mr. Schidlowski and brought him to Denver from Chile around 1974 to serve two years in a local correctional facility. In the eighties he would be returned to Chile after 23 of fraud were uncovered with the Securities and Exchange Commission. 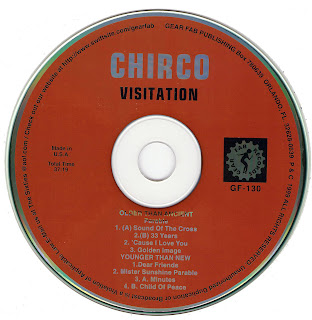