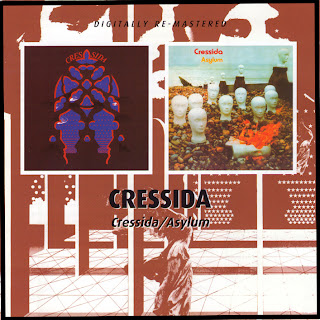 In the great lottery of pop, a question that frequently has to be asked is why one group and not another? Why are groups such as The Moody Blues, King Crimson and even dear old Gentle Giant venerated, while equally lyrically and musically powerful bands such as Cressida are left, discarded as the forlorn dummies heads on the beach on the cover of Asylum? It is a hard question to answer at the best of times and even harder when you reacquaint yourself with the group's small but perfectly formed oeuvre.

By 1969, the decade-and-a-half-old form of rock and roll was clearly here to stay. The music had already traveled from the 2:30 jangle about love into song cycles, heavy riffing and, thanks to the proliferation of psychedelic substances, a new mysticism. Summers of love had been and gone and even places like Beckenham in Kent were having free festivals. A man had landed on the moon and on record, the cosmos was the limit. With their name taken from Greek mythology - the daughter of soothsayer Calchas, Cressida betrayed her eternal love Troilus, of whom Shakespeare wrote so eloquently – the group are one of those glorious footnotes that make progressive rock so very interesting.

There may be few today who can recall the power and the glory of Cressida, but the music they offered during the brief sliver of a recording career is truly more than ripe for reappraisal. The group was formed in the late 60s by keyboard and mellotron player, Peter Jennings. Adding Angus Cullen on vocals and guitar, John Heyworth on guitar, Kevin McCarthy on bass and lain Clark on drums, the group gained a reputation as a fierce live act, their music full of delicate passages and interludes of storming complexity. With Cullen's sweet, lyrical voice and an obvious nod to The Moody Blues, Cressida became one of the first signings to Vertigo, the recently-founded progressive rock offshoot of Polydor records.

Vertigo were very much in the mould of forward-thinking new record labels, well away from the suited and stuffy mainstream. With an almost arbitrary A&R policy (Patrick Campbell Lyons from the original Nirvana scouted for the label for a while), Vertigo sought to release music by acts that reflected the Zeitgeist perfectly. All with that incredible spiral logo revolving on the label: if the music didn't blow your mind, then the graphics certainly would. So, after releases by Colosseum, Juicy Lucy, Manfred Mann, Rod Stewart and Black Sabbath, Cressida's eponymous debut album, (VO 7) became the seventh release on Vertigo.

Released on the imprint's legendary spiral label in 1970, it was produced by Ossie Byrne and engineered by Robin Thompson. Byrne had previously worked with The Bee Gees and brought some of the economic simplicity of their early productions to the recordings. Its taut, prog-pop melodies won the band a small and fervent following. With tinges of blues and classical in this pungent mix, the album, although evoking King Crimson, Paul McCartney and The Moody Blues, was clearly a highly individual piece of work. From the opening pop rush of To Play Your Little Game to the great, upbeat closer, Tomorrow Is A Whole New Day, Cressida was a much-loved album for those in the know.

The deft touch and George Harrison-esque soloing of Winter Is Coming Again would have made a great pop single. Time For Bed was a whimsical jazz take on Zebedee's then-contemporaneous catchphrase. Although not a huge commercial success, the release slotted in perfectly with Vertigo's ethos, and Cressida were to given the green light to a return to the studio. But not, of course, without a few obligatory personnel changes. This was early 70s rock, after all. Guitarist John Heyworth departed in 1971, and was replaced by John Culley and New Seeker member Paul Martin Layton.

Their second album, Asylum (Vertigo 6360 025) released later that year, was a different beast altogether. The album was a denser, darker affair, relying less on Cullen's vocals. Ex- Donovan, Ginger Baker's Airforce and John Martyn reedsman Harold McNair played on the album, adding to its deeper, lilting feel than its predecessor, which focused more on instrumental passages and elaborate arrangements. The subject matter was also far less mystical than their contemporaries.

Munich (or to give it its full title, Munich 1938; Appeasement Was The Cry, Munich 1970; Mine To Do Or Die) is tremendous fun: with its subtle organ parts and great dual lead guitar as well, it can be seen as the group at their very zenith. Again produced by Byrne, Asylum featured orchestration and musical direction from Graeme Hall – who had recently also worked with Shadows offshoot Marvin, Welch & Farrar. The album remains the jewel in their crown Changes were afoot at Vertigo, and by late 1971, the group found themselves without a contract. Quietly, like so many of the era, they split up.

Drummer lain Clark went on to play with Uriah Heep for a year and John Culley became a member of another lamented prog act, Black Widow. Paul Layton returned to simpler pastures with the New Seekers and the special guest who had so enlivened the instrumentation on Asylum, Harold McNair, was to die tragically from cancer in 1971. Little has been heard from the others since. The Vertigo label, ironically, was reactivated by Universal in 2003 for bands such as The Rapture.

One of the coolest items that autumn was a skinny-fit Vertigo T-shirt with the spiral logo on it, worn by people who had little idea of the imprint's illustrious history. So, what goes around spirals around, and here we have the opportunity to revisit both of Cressida's albums, possession of which have long been an insider sign to the cognoscenti. A small, but thriving collector's market ensures that originals routinely fetch three figure sums.

We may never know why the group failed to ignite as some of their contemporaries; but what we do know, is we have two beautiful, much-loved albums available again, in a delightfully clean remaster, for the delight and delectation of all. And whereas we might be over familiar with our copies of In Search Of The Lost Chord and In The Court Of The Crimson King, Cressida and Asylum are full of sweet, yearning and strange, unfamiliar surprises, yet to be discovered.
by Daryl Easlea 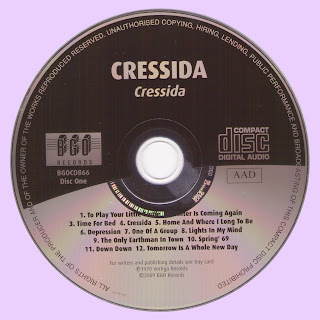 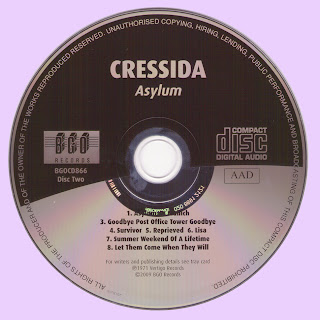