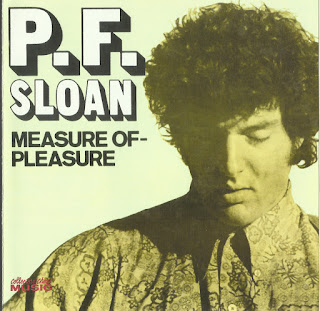 With the exception of "Secret Agent Man", nearly all of P.F. Sloan's best-known songs appear on his mid-'60s Dunhill records. While Songs Of Our Times and Twelve More Times endure as classic folk-rock albums, and "Take Me For What I'm Worth" as first-rate songwriting, Measure Of Pleasure sounds far more modern as a piece of recording than the Dunhill LPs. Produced in 1968 by Tom Dowd and recorded in Muscle Shoals with a band that included Steve Cropper, Measure was overlooked upon its release. Still, Sloan's rich tenor and controlled falsetto mark him as a completely credible pop-soul singer. "New Design" stands with his best work, and on "Country Woman" he sings, "Everything I could hope for/Is waiting for me down in Tennessee," and sounds convincing. The idiomatic backing tracks are superb, and Sloan sings as though he needs nothing more than a hot meal and a warm Tennessee woman.
by Edd Hurt

The brilliant first Atlantic album by PF Sloan blend of New York folk and rougher roots, all recorded at the Sun Studios in Memphis, with some great help from a backing group that includes Steve Cropper on guitar! Sloan's folkie tendencies are nicely undercut by the harder Memphis groove here – one that's got some slightly soulful undercurrents, and which works beautifully with the poetry of his original compositions. The blend is one that helps keep the record from sounding too much like any of Sloan's contemporaries – although at one level, it's also a conduit for so a huge amount of different musical ideas and options that were opening up to American singers at the end of the big folk boom of the 60s. Elements of Tim Hardin, Tim Buckley, and Fred Neill certainly surface here – but there's a sense of self that's all Sloan's own, and which makes us wish he'd followed up with work as strong as this! 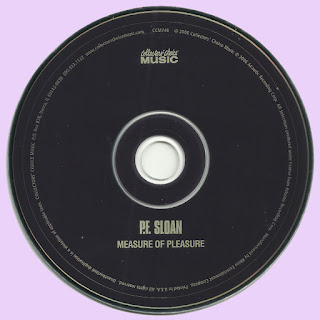