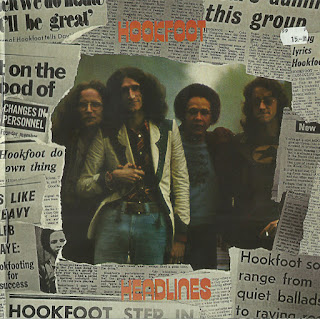 Hookfoot were,  very much a band of "musician's musicians". All of them were in great demand as session players, both individually and collectively. As well as backing Elton John on many of his early albums they also perform en masse on Mick Grabham's 'Mick The Lad' solo LP (possibly it was this which led to the misinformation that Grabham was himself a Hookfoot member) and on Steve Swindell's solo LP from 1974 (the astute amongst you may recognise Swindell's name as a former Hawkwind member). The band also backed Harry Pitch and Zack Laurence on the chart-topping one-hit wonder 'Groovin' With Mr Bloe'; and although his voice is perhaps an acquired taste, Long John Baldry's 'It Ain't Easy' LP from 1971 also featured bassist Dave Glover, drummer Roger Pope and guitarist Caleb Quaye throughout, some of the songs sounding distinctly Hoofoot-esque.

Great songwriters, great musicians, with their tastes strayed too far towards bluesy country funk for the heads to ever fully embrace them. A bit like Steve Stills, in some ways: you kinda dug the way he did it, but not always what he actually did. Thing is though, Caleb Quaye was undeniably one of THE finest guitar players the UK has ever produced - not for nothing did Eric Clapton surprise David Letterman a lttle while ago by informing him "I'm not the world's best guitar player. Caleb Quaye is." - and I can't help wondering, if Hookfoot had played hard rock and psychedelia, whether their albums might not today be held in the same kind of reverential, big-dollar high esteem by collectors as, say, Little Free Rock, Ashkan, Aunt Mary, Blonde on Blonde and especially I suppose Black Cat Bones (who likewise featured a stellar guitar player in the shape of a young Paul Kossoff). I still challenge any fan of the above not to go into a toe-curling trance of guitar-fuelled ecstasy on hearing Hookfoot blister through 'Nature Changes' on the 'Live in Memphis' album though, or to goggle in awe at the pyrotechnics on display on all twelve minutes of 'Shoe Shine Boy', one of the otherwise unreleased songs on the 'Headlines' compilation album.

Headlines', the double LP compilation put out by DJM 1975,a year or so after Hookfoot's demise. Interestingly, it includes 4 non-album cuts, but no live material and none of the band's singles!
by Phil McMullen, April 2010 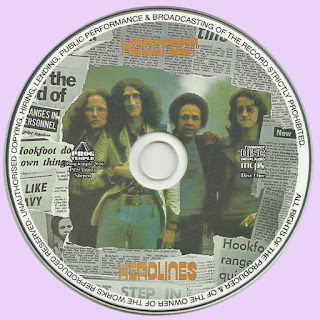 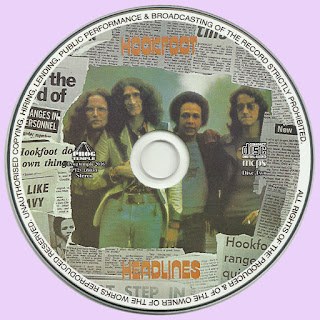 Free Text
the Free Text
Posted by Marios at 9:25 AM 5 comments: