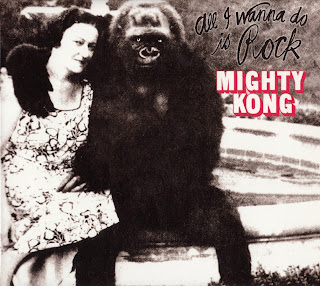 Mighty Kong was the 'supergroup' successor to the legendary Daddy Cool, which broke up in in August 1972. It was also the fifth (and technically the last) in the line of groups that featured Ross "The Boss" Wilson and Ross Hannaford, which began with Pink Finks in 1965. Despite its all-star lineup, culled from three of the top groups of the time, the band was shortlived and never really achieved its considerable potential, effectively relegated to being a footnote in the larger story of Daddy Cool. The main relic of this period was their excellent (and greatly underrated) LP All I Wanna Do Is Rock.

The formative stages of the new group (late '72 - early '73) promised much, and involved several notable players of the day. After Company Caine broke up in October '72, not long after Daddy Cool, singer/lyricist Gulliver Smith linked with the two Rosses. They worked for several months on getting a new band together, but Gulliver moved on to launch his solo career at the end '72, although the Smith/Smith writing partnegsubip left its mark with two fine songs which eventually wound up on the LP.

At the start of 1973 there was another promising connection when Hannaford & Wilson got together with guitarist Tim Gaze (Tamam Shud, Kahvas Jute) and drummer Nigel Macara (Tamam Shud), but after about a month of rehearsals Gaze and Macara left. Gaze's place was taken by Company Caine guitarist Russell Smith, who had been off playing in the touring version of G.Wayne Thomas' studio "supergroup" Duck. For a new drummer, Hannaford & Wilson turned to the multi-talented Ray Arnott, who announced in March that he was leaving his current gig with Spectrum to join the new band (which also reunited him with Russell Smith, his former bandmate from the last days of Cam-Pact and the early Company Caine).

Unfortunately, Arnott's departure triggered the break up of Spectrum -- founder Mike Rudd felt that it wouldn't be possible recruit a new member and maintain Spectrum's special chemistry. Spectrum played their farewell concert in mid-April and Arnott was then freed to join the new group; in a neat piece of symmetry, Gaze and Macara hitched up with the remaining members of Spectrum to form Ariel. With the final addition of bassist Tim Partridge (also ex-Company Caine) the new band was complete and was launched in May 1973 under the name Mighty Kong.

After the breakup of Daddy Cool, Wilson and Hannaford were keen to get away from DC's stylistic restrictions -- the 50s repertoire, the 'zany' stage outfits -- and the media's concentration of the obvious elements of Daddy Cool, which tended to obscure the more serious side of their work. The material that they put together was in a heavier, contemporary rock style, bringing in some of the progressive elements which had featured in their earlier band Sons Of The Vegetal Mother, and which had resurfaced on the second Daddy Cool LP Sex Dope, Rock'n'Roll: Teenage Heaven.

Their only album, All I Wanna Do Is Rock, was recorded at Melbourne's Armstrong's Studios, produced and engineered by John Fischbach. It's a fine record, with strong hints of Wilson's future direction in Mondo Rock, but there is still plenty of humour, as shown by the jokey cover art -- an old novelty photo showing a woman and a gorilla (well, a man in a gorilla suit actually) sitting side by side, with the gorilla's arm around the woman's shoulder . Picking up the cover motif, the pulsating opening track "Jungle In My Blood" features a prowling guitar riff from Hannaford & Smith; it's followed by Wilson's declaration of spritual independence "Got My Beliefs" (which actually dates back to his days in Party Machine, and is not too far removed from songs like the Vegetal's "Love Is The Law)". The highlight of the album is undoubtedly the beautiful "With A Smile Like That (How Could We Refuse?)", a dark, soulful ballad co-written by Gulliver Smith and Russell Smith. Along with Mondo Rock's "State Of The Heart" it is one of Ross Wilson's best vocal performances, with its soaring vocal line showing off his upper range to fine effect. The next three tracks -- "Homesick & Horny" and the ebullient rockers "All Throught The Day" and "Calling All Cats" -- are perhaps the more typical of the Daddy Cool style (with Hannaford & Wilson still seemingly unable to resist a bit of Zappa-style doo-wop parody).

"Some Other New Address" is the other excellent Smith/Smith song, and the only track not sung by Wilson, with vocal credits going to guitarist Russell Smith. "Hard Drugs (Are Bad For You)" is Wilson's cautionary tale of the dangers of heroin. The drug was by then becoming a serious problem in Australia's major cities, largely due to the huge influx of heroin brought in by and for American servicemen visiting Australia on R&R (rest and recreation) leave. By 1973 heroin was cutting a swathe through the Australian music scene with many leading performers becoming addicts. The title track closes the album another goodtime rocker from Wilson.

Regrettably the group never really gelled, and Wilson has commented in recent times that it lacked the chemistry that made Daddy Cool such a successful group. Mighty Kong had already split up by the time the album and its accompanying single, "Callin' All Cats" / "Hard Drugs (Are Bad For You)" were released in December 1973, but without a band to promote them, the records made no impression on the charts.

In early 1973 Wilson and Hannaford bowed to financial pressures -- the split of Daddy Cool had left them with large debts so they reformed DC for what was meant to be a one-off performance at the 1974 Sunbury Festival. It was rapturously received, and prompted a full reformation, with more touring and recording; this incarnation of the band lasted until September 1975.
Miles-ago 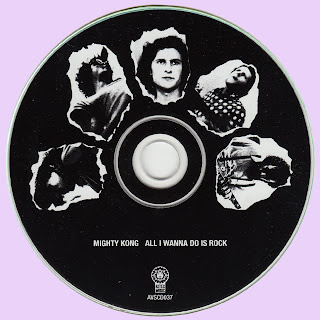 Free Text
Text Host
Posted by Marios at 6:00 AM 8 comments: