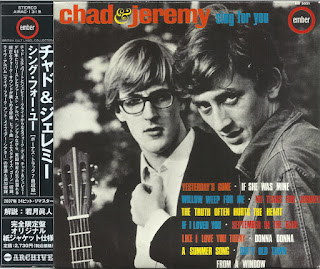 Generally relegated to footnote status, folk/rock duo (heavier on the folk) Chad & Jeremy nonetheless managed a certain level of influence among a group of navel-gazing sensitive types who couldn’t totally commit to either the Beatles or Stones camps. And yet they still managed to make something of a splash riding the crest of a wave that was the British Invasion. At a time when it seemed every artist was copping the sound of the Beatles and/or Stones, Chad & Jeremy remained (relatively) committed to their folk origins. The trouble with this was their particular brand of folk was slowly falling out of favor following the arrival of Bob Dylan.
As if an attempt to split the difference, they embraced an approximation of the British Invasion sound while still attempting to adhere to their folk roots. But it didn’t quite suit the soft folk within which they best operated, and their attempts at continued relevance beyond a few early singles (“Yesterday’s Gone” and the song for which they are perhaps best known, “A Summer Song”) sound forced. They only truly succeeded when sticking closest to their roots; any venture into mainstream pop tended to fall short, sounding like a feeble attempt to tap into a commercial market quickly losing interest in them
Yet throughout, they prove to be fine interpreters of contemporary folk and standards of the genre. They take on Ewan MacColl’s perennial folk classic “Dirty Old Town”, giving it a decidedly country bent. “No Tears for Johnny”, while sounding feather-light, possesses a lyrical profundity and anti-war stance that far surpasses anything Simon & Garfunkel and their ilk ever attempted. It is within these unexpected moments that the music of Chad & Jeremy rises above much of the filler that weighed down their studio albums and prevented them from finding the favor they perhaps deserved. And while they would eventually surrender to the times with their generally well-regarded psychedelic albums Of Cabbages & Kings and The Ark, these early recordings show the pair trying desperately to get their music heard
Unfortunately the music of Chad & Jeremy has been unfairly overlooked by all but the most ardent fans of ‘60s pop music. The duo stands as a fine reminder that the pop landscape wasn’t all Beatles, Stones, Dylan, and Motown.
by John Paul, 14 September 2016 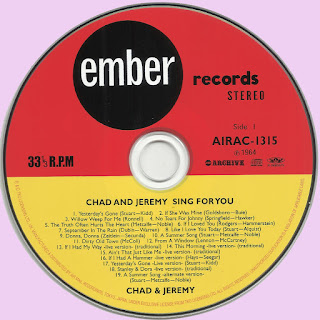