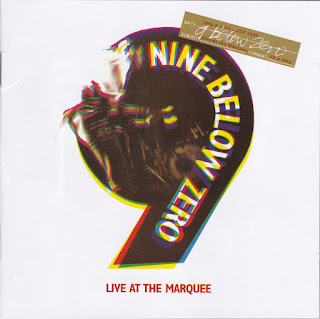 Nine Below Zero started off life as Stan’s Blues Band in 1977 and consisted of four South London lads who found inspiration in the Rhythm and Blues.  Led by Dennis Greaves (lead vocals & guitar) the band included his schoolmates Mark Feltham (vocals & harmonica), Peter ‘Pete’ Clark (Bass) and Kenny Bradley (Drums).
Graves was obsessed by the Blues.  But to form a R&B band in the late 70s was a bold, almost reckless, move.  This was the time when Punk was exploding, and had literally blown other music genres – like R&B and Progessive Rock – out of the water.  (I think I’m right in saying that Dr. Feelgood were probably the only well-known British R&B band at the time. They’d formed in 1971 and hailed from Canvey Island in Essex and were known for their driving R&B which had made them one of the most popular bands on the growing London pub rock circuit.)
Despite the seemingly unstoppable rise of Punk, the sharply dressed Stan’s Blues Band played in local South London pubs like the Apples and Pears, the Clockhouse, the Green Man and the Thomas ‘A’ Becket.  Playing six to seven nights a week they built up a loyal following.  Like Dr. Feelgood they went hell for leather and played at a frenetic pace.  Mixing original songs with covers at their gigs, they were soon playing all over London.
Stan’s Blues Band changed their name to Nine Below Zero (they were named after a song by Sonny Boy Williamson II) on the advice of former musician Mickey Modern.  He’d seen them play at the Thomas ‘A’ Becket (in the Old Kent Road, Southwark, South London) in 1979 and was so impressed that he offered to manage them.
In a bold – but completely justifiable – move, Modern decided that Nine Below Zero’s first album would be a live one.  And so with just one change of personal (Micky Burkey for Kenny Bradley on Drums) Live At The Marquee was released in 1980.
The album was recorded at the well-known music venue, the Marquee Club (in Wardour Street, West London) on Wednesday 16th & Thursday 17th July and was billed as a live recording.  The admission fee was £2 with a reduced rate available for students & Marquee Club members.
by John Field
This re-release is the latest on Universal’s ‘Re-present’ imprint. The album was originally released back in 1980 and became a huge success for the band. This remastered release sees the original 14 track album expanded to 21 tracks for the first time, taking in the whole show, also included in the package is a DVD featuring live footage from the night, so instead of having to imagine the sweaty crowd crammed in to the Marquee you can see them in all their glory.
Musically Nine Below Zero are a hard working rhythm and blues outfit who put their heart and soul into a performance. The guitar work of Dennis Greaves coupled with the fantastic harmonica work of Mark Feltham are the backbone of the Nine Below Zero sound and on tracks like ‘Tore Down’, ‘Hootchie Cootchie Coo’ and ‘Pack Fair & Square’ the guys demonstrate what rocking blues are all about.
This album may have been recorded 42 years ago, but it still sounds as fresh and as urgent as it did back in the day and with the remastered treatment and the inclusion of the DVD it makes a compelling package. The band are still treading the boards and no doubt still putting in quality performances proving that old blues bands never die, they just need a bit of a polish from time to time.
by David Wilson 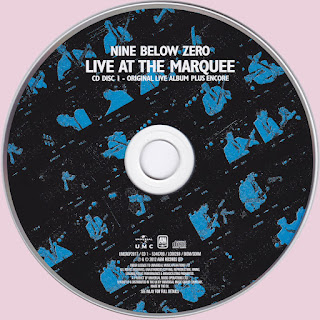 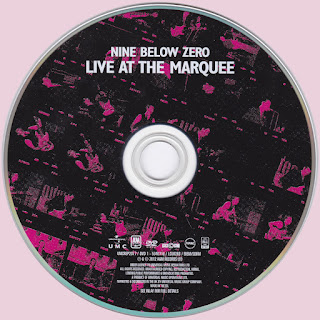