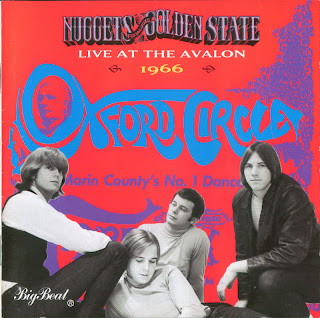 To the uninitiated, the name Oxford Circle may only be recognisable from a faded Fillmore or Avalon poster, where they once shared the bill with the Dead, Quicksilver or Big Brother. Amongst the cognoscenti, however, their name is mentioned in the hushed, awed tones reserved for only the truly great. Amazing to think that such immense repute stems from the outfit's sole recorded legacy, the $500-rated single Foolish Woman / Mind Destruction. But all it takes is one listen to this masterpiece of throbbing punk hysteria, and its demented, off-the wall flipside, to vindicate the legend of the Circle.

Contrary to public opinion, the Circle were not in fact a San Francisco band. Rather, they hailed from the university town of Davis, just outside state capital Sacramento. Gary Lee Yoder, Dehner Patten, Jim Keylor and Paul Whaley had been kingpins in the over-populated northern California teen scene ever since they got together in late 1964 as the Hide-Aways. One year later they had become the Oxford Circle, in deference to their trademarked interpretation of the blueswailing English punk sound. Patten tore off spiky, spindly leads with dexterity; bassist Keylor and drummer Whaley constituted one hell of a powerhouse rhythm section; and the Circle were fronted by the soulful, full-blooded warbling of Yoder, who was also not averse to writhing around the stage floor or coaxing ear-splitting electronic noises from his Gibson.

Sensing the constrictive nature of their immediate environs, the Circle frequently journeyed south to San Francisco. There, their tight and dynamic stage show quickly got them booked at the ballrooms, and the combo would regularly blow their more illustrious contemporaries off the boards. No further evidence is needed than Live At The Avalon 1966, where Family Dog honcho Bob Cohen's dynamic recordings capture the Circle at the peak of their powers.

From the nine-minute improvised feedback assault of Mystic Eyes that opens the disc, via ripping takes on punk staples such as You're A Better Man Than I, Baby Please Don't Go and I'm A Man, through to Yoder's tuff originals like Soul On Fire and Since You've Been Away, Live At The Avalon firmly establishes the Circle as the pre-eminent psychedelic garage band, bar none. And it crystallises that brief but magic moment when punk fury took on an experimental zeal and mutated into something quite breathtaking indeed.

The personnel may have graduated to projects more feted - Whaley to Blue Cheer, Yoder and Patten to Kak - but the Oxford Circle was its constituents' finest hour. Live At The Avalon tells the story of this fascinating band in an exhaustively annotated and lavishly illustrated package.

In addition to the incredible live material, both sides of the crazy World United single are included, as well as a further two tracks from an aborted 1967 demo session held in Hollywood (and featuring Mac 'Dr John' Rebennack on organ).

A must-have for the aficionado, but essential too for any fan of well-recorded, kickass 1960s garage rock & roll. Check it out!
by Alec Palao 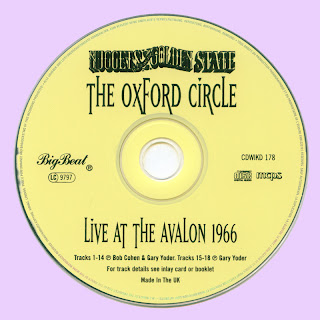 Free Text
Text Host
Posted by Marios at 7:58 AM 12 comments: