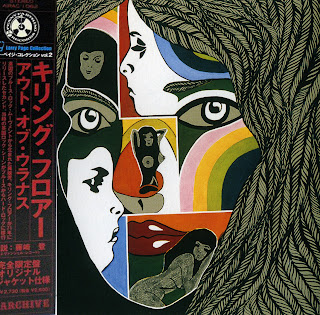 In the Summer of 1970 Killing Floor picked up one of those dream gigs that don't come along very often - a six week residency in the South of France! In the course of the holiday (sorry, engagement) yours truly got seriously sunburnt and the club went bust. However we all had a jolly good time, and more importantly, we were able to use the empty club each afternoon to rehearse for our new album, "Out of Uranus".

Where the hell did that name come from? Well as usual it was me and my big mouth - overhearing talk of a college band with that name I repeated it innocently at a band meeting. Immediately it was taken up as the name for the next album and I've had to live with it ever since. Well, it was at least memorable, and Bill wrote a pertinent lyric for the opening track of the album.

We were by now a four-piece band - Lou being involved in other projects. We had actually split completely a few months earlier, but drifted back together one by one. By now the British "Blues Boom" was all over and blues was not saleable in the U.K. Instead we'd travelled several times to Germany and Switzerland, playing mainly residencies with occasional club or festival dates.

For the new album we had a whole set of original new material which could roughly be described as progessive blues, veering towards the "heavy" side. Bands like Free and Led Zeppelin were waving the "heavy" banner pretty hard at the time - it seemed like the way to go.

So it was back to Pye studios near Marble Arch, this time the larger No.1 room. The sessions, as always, were late night all night affairs. Lou came in and played some piano on "Call For the Politicians" and we featured a mellotron and violin on "Soon There Will Be Everything".

The cover had already been designed for another "Penny Farthing" project, and was generously donated to our album - at once distinctive, memorable and completely tasteless!

"Politicians" was a single, and with Larry Page behind it there seemed a fair chance of success. Larry had been involved in chart hits for the Kinks and the Troggs in the sixties. "Politicians" did make it on to the Radio One playlist, and we heard it quite often on the radio. We even went up to the West End one afternoon and guested on the "Radio One Club", being interviewed by Annie Nightingale and getting screamed up by the young audience. We met Gilbert O'Sullivan in the dressing room, a friendly chap who looked quite normal until he slipped into his schoolboy stagegear. My greatest regret was leaving before the arrival of Ken Dodd.

But "Politicians" wasn't a hit and life carried on as normal. Later we found out that it had sold several thousand copies in Germany, but nobody told us at the time. We performed "Milkman" on BBC TV as the closing track of "Disco 2", a programme which was the fore-runner of The Old Grey Whistle Test. We mimed to the backing track while Bill sung live - Bazz thrashing away on the BBC plastic imitation cymbals.

"Out of Uranus" is an interesting and at times exciting record, although parts of it sound dated and can be clearly pegged to those "progressive" days of the early seventies. Listening to it again for the first time in many years I found it entertaining and enjoyable, and was struck by the wealth of ideas it contains.
by Mick Clarke 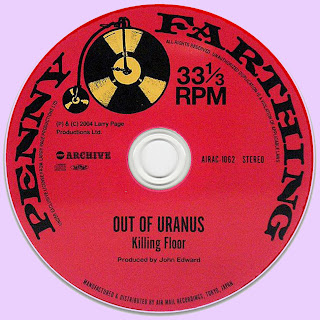