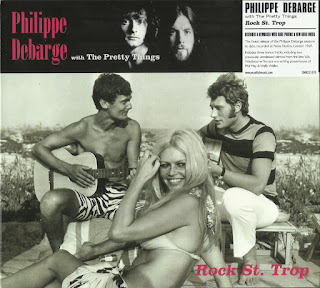 Back in the stone age of rock ‘n’ roll – the year 1969, to be exact – Phil May (vocals) and Wally Waller (bass) of British rock legends the Pretty Things were approached with an unusual offer. Flown to St. Tropez by rich French playboy Philippe DeBarge, the bandmates met with the young millionaire at the DeBarge family estate. DeBarge had long harbored dreams of rock ‘n’ roll stardom, and he wanted to record an album with the Pretty Things as his backing band.

In December 1968, the Pretty Things released S.F. Sorrow, the album that has since become known as the band’s psychedelic-era masterpiece. By the following August, however, the album was selling slowly, founding guitarist Dick Taylor had left the band, and the PTs’ future was uncertain. So May and Waller took DeBarge up on his offer, writing songs for and recording DeBarge’s album at Nova Studios in London during September 1969 with DeBarge singing lead vocals, May on backing vocals, and the band – including Waller, keyboardist Jon Povey, drummer ‘Twink’, and new guitarist Vic Unitt (from the Edgar Broughton Band) providing the music.

When S.F. Sorrow sales picked up months after its release, EMI wanted to follow up with a new album from the band, who subsequently put the DeBarge project on the back burner in order to work on what would become their 1970 album, Parachute. The album remained lost for almost 40 years when it was discovered by musician and Ugly Things zine publisher Mike Stax, who had found two acetates of the album and had it mixed and mastered, releasing it in 2009 on his own Ugly Things label. Stax even enlisted the classic Pretty Things line-up – including guitarist Dick Taylor – to record a new song titled “Monsieur Rock (Ballad of Philippe)” as a bonus track for The Pretty Things/Phillip DeBarge CD.

On September 1st, 2017 Madfish released this obscure album as Rock St. Trop, billed to Phillipe DeBarge with the Pretty Things. Remastered for CD and featuring rare photos and new liner notes by Waller, the album features a 20-page booklet and bonus songs, including “Monsieur Rock.” Influential far beyond their often meager album sales, the Pretty Things seldom made a musical mistake during the 1960s and ‘70s and aside from being chummy with superstars like Led Zeppelin and David Bowie, the PT’s influenced bands as diverse as the Clash and the Libertines, among others, and this long-lost album is a welcome addition to the band’s catalog.
by Rev. Keith A. Gordon

Philippe DeBarge passed away on February 3rd 1999, on the front cover photo of this release, he sits on the left side, with a guitar in his hands, next to him is Johnny Hallyday who also left to join heaven's big band, few days ago (December 6th 2017), and the charming girl sitting in front of them is the one and only one, Brigitte Bardot.

Merry Christmas my friends with health and lots of music in your life. Keep on Rockin'. 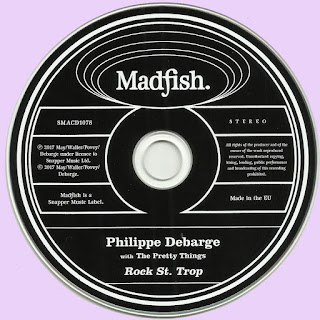 Free Text
Text Host
Posted by Marios at 7:49 AM 11 comments: