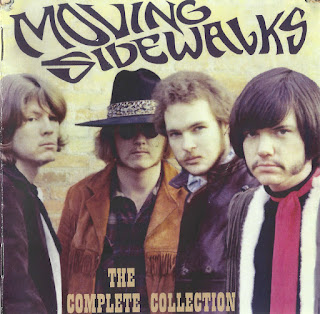 The Moving Sidewalks have been rendered down to a rock n’ roll footnote – they were the band that spawned young guitar sensation Billy Gibbons to eventually find fame and fortune with the power trio ZZ Top.  But, to view them as simply a springboard, is to miss out on some really great rock n’ roll. The Complete Collection – a two-disc set featuring their only proper album, Flash (1968),  plus singles, demos, and unreleased material.

The band’s greatest moment was “99th Floor,” a perfect blend of fuzzed-out blues and trippy psychedelia, which was picked up by Wand Records in 1967, and became a regional hit.  Nothing else the band delivered during that period connected, and they were dropped from the label and returned to their Texas roots. Those singles and outtakes (including several insane readings of “I Want To Hold Your Hand”) make up the bulk of disc two.  There’s also some sides of Gibbons’ earlier band, known as the Coachmen, but these aren’t terribly notable.

Then, something fortuitous happened – they had a chance to open for Jimi Hendrix for a pair of regional shows.  Gibbons and Hendrix became fast friends, spending hours together, trading licks and listening to music. Armed with a new lease on life, the band entered the studio to record a proper album. The result, Flash, is one of the great lost records of the psychedelic era.

“Flashback” opens the set – organ, guitar, and killer drumming, with Gibbons handling the vocals.  Halfway through, the song sounds like it ends in a sea of echo, with a snippet of their almost-hit “99 Floor” fading in for a brief moment.  Then, the song takes on an Indian flavor for the coda – pretty cool stuff.  “Scoun Da Be” has a bluesy groove, and is pretty similar to what ZZ Top would become, sans the organ.  It’s no surprise that Hendrix’ s influence crops up all over the place – near the end of “You Make Me Shake “ there’s distorted guitar that jumps from left to right.  “Pluto Sept. 31st” has a rhythm very similar to Jimi’s “Fire,” while Gibbons sings with a Hendrix coolness.  About 2 minutes in, the song totally breaks down into psychedelic trippiness, similar to “2000 Light Years From Home” from the Stones, strange laughing, a crazy backwards guitar solo, eventually finally returning to the original song structure.

But, nothing compares to the one-two punch which ends the album – “Eclipse” and “Reclipse” both aren’t really “songs,” so much as exercises in utter weirdness.  Bursts of distorted guitar are interlaced with odd talking, singing, and strange gibberish, not unlike the Beatles “Revolution #9,” except, this actually is pretty entertaining.

Unfortunately, tensions in the band would lead to their breakup even before the LP was released.  So, it’s no surprise that it never really registered on most people’s radar.  Which is indeed a shame – Flash is a very solid listen.

Certainly anyone interested in how ZZ Top got started should pick up The Complete Moving Sidewalks.  However, their lone album, Flash, can stand on it’s own, thank you very much.  Even if Billy Gibbons hadn’t gone on to fame and fortune, the Moving Sidewalks would still have been considered great.
by Tony Peters

Dig deeper into 'The Complete Moving Sidewalks,' however, and its rarities-packed second disc nearly makes up for the dated trinkets scattered about their initial project. These stand-alone singles and demos boast none of the studio trickery that mars the 'Flash,' and that imbues these sides with a far more interesting, almost proto-punk feel.

There is an romping, unfettered energy about the organ-driven, hometown hit '99th Floor,' and a whiff of the biker bar-rattling blues rock to come on 'Help Me.' 'Need Me' draws a straight line from the sexualized purr of 'Wild Thing' to the psychedelic weirdo jangle of the 13th Floor Elevators' 'You're Gonna Miss Me.' They also get the Beatle-y pretensions utterly right on a wackadoo take on 'I Want To Hold Your Hand,' which echoes behind drummer Dan Mitchell's furious fills with an acid-laced wonder. The set then goes even further back, offering recordings of '99th Floor' and 'Stay Away' from an earlier, still more primitive Gibbons amalgam called the Coachmen.

Even so, these will likely be heard as nothing more than pleasant distractions for anyone other than ZZ Top completists -- or those hoping to familiarize themselves with Gibbons' work here before the Moving Sidewalks reunite for their first gig together in some 45 years, on March 2013, at the B.B. King Blues Club in New York.
by Nick Deriso 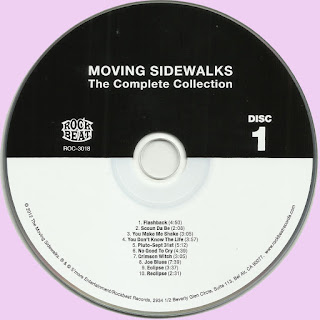 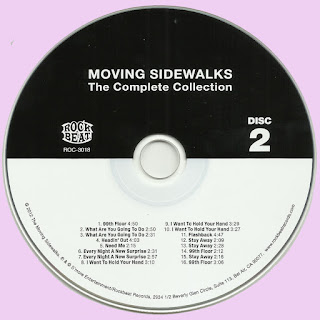