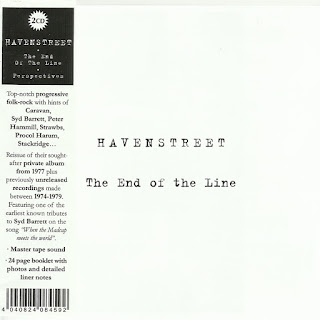 The genesis of Havenstreet goes back to 1969, when Phil Ridgway and Jeff Vinter played in The Gas, an experimental psychedelic band heavily influenced by Barrett-era Pink Floyd. The two friends started to write songs their own songs, ending up as a folk duo. With the offer to record some of their material at a friend's studio, they recruited more musical friends…so Havenstreet was born.

The influences had expanded now to bands and artists such as Peter Hammill, Strawbs, Traffic, Procol Harum, Stackridge, Keith Tippett, Bert Jansch…In the early-mid 70s they recorded a couple of albums which circulated as private cassettes among friends and relatives. In 1977, Havenstreet released "The End Of The Line", a self-released album in a private edition of 250 copies. It was collection of very English songs with evocative, literate lyrics and a stunning progressive folk-rock sound. It featured one of the earliest known tributes to Syd Barrett on the song "When the madcap meets the world".

This expanded double set reissue of Havenstreet's sought after album includes, the original "The End of the Line" album from 1977, a new album called "Perspectives" which presents the best tracks from the privately pressed cassettes The Autumn Wind (1974) and Transition (1976) plus rehearsal recordings for The End of the Line (1975/1976) and previously unreleased recordings for the group's projected fourth album (1979), which was never completed. These amazing tracks range from electric acid-folk to Barrett-esque psych-pop, pastoral folk and Caravan styled prog-rock.
Guerssen  https://guerssenrecords.bandcamp.com/album/the-end-of-the-line-perspectives

Combining the back-to-basics acoustic feel of the nu-folk generation with a swirly, psychedelic vibe, "The End of the Line" could actually be an album that was made in 2014. But this album was privately released in 1977. Now finally remastered and brought into the present, the retrospective feeling is amplified and should appeal greatly to fans of 70s folk and progressive music. This reissue is a must have even for the lucky few who own an original copy of the album as it comes with a bonus disc, "Perspectives", that compiles non-LP tracks from 1974-79. The quality of the extra material shines through.
by Michael Bjorn (Strange Days Magazine) 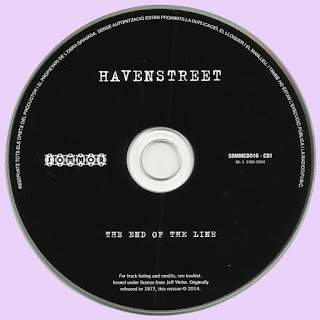 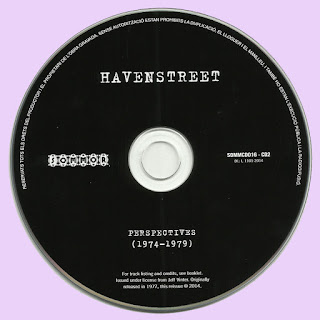